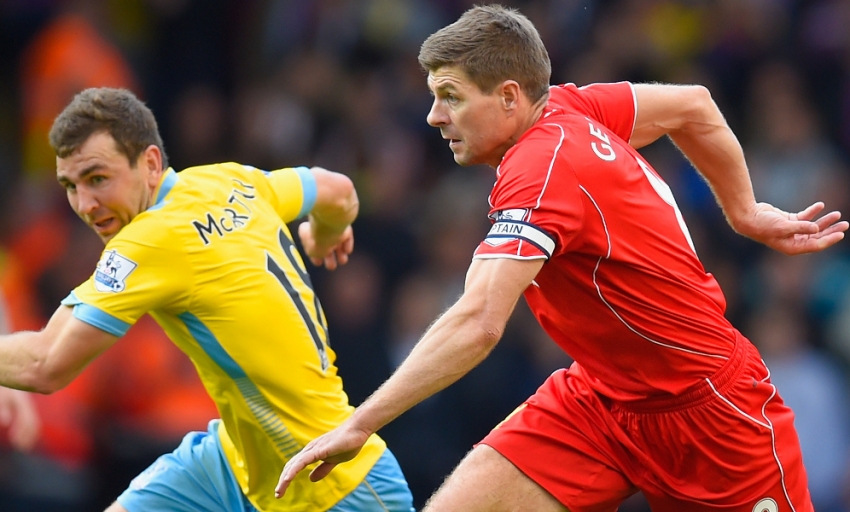 Steven Gerrard made his farewell Anfield appearance as Liverpool suffered a 3-1 defeat to Crystal Palace on Saturday evening.

On the day the captain played in front of the Kop for the final time, Adam Lallana gave the Reds the lead midway through the first half, pouncing on a wayward pass and running through on goal before dispatching beyond Wayne Hennessey.

But the visitors levelled when Jason Puncheon curled home a fine free-kick just before half-time and Wilfried Zaha put them in front, tapping in with his first touch after coming on as a substitute on 58 minutes.

Liverpool toiled in search of an equaliser, but while there was to be no fairy-tale ending as Glenn Murry netted at the death to secure the points for the Eagles, Anfield united to show their appreciation for a man who'd made millions of dreams come true year upon year since 1998.

An air of emotion hung over the famous old stadium ahead of kick off as fans gathered to pay homage to Gerrard.

Almost 17 years since he'd first jogged onto the Anfield turf as an 18-year-old substitute, he led his teammates out for the final time on home soil ahead of a summer move to LA Galaxy.

The game was preceded by tributes for the departing skipper as fans held aloft cards to form a stunning mosaic. The Lower Centenary Stand simply read 'CAPTAIN' while the Kop displayed 'S8G'.

On the pitch, players from both teams formed a guard of honour to welcome Gerrard and his three daughters out onto the field.

The interest surrounding Gerrard's farewell Anfield run out was natural given all he'd achieved over the course of 700-plus appearances, but the 34-year-old had been eager to stress in the pre-match build-up the importance of not losing sight of the three points at stake.

Brendan Rodgers made two changes to his starting line-up to the side deployed at Chelsea last weekend, with Jordon Ibe and Alberto Moreno replacing Rickie Lambert and Glen Johnson.

The midfielder put Scott Dann under pressure as he attempted to reach Martin Kelly's misdirected pass. His persistence paid dividends as he held off the challenge of the Palace skipper before bounding through and clinically firing beyond Hennessey.

But Palace were by no means here to make up the numbers and threatened a near-instant riposte when Joe Ledley reached a loose ball on the edge of the box, but struck over unmarked.

Then, Puncheon's one-two with Yannick Bolasie opened up space for a shot on the edge of the area, which required a strong glove from Simon Mignolet to tip around the base of the post.

The Eagles' endeavour was rewarded on 43 minutes when Puncheon restored parity with a free-kick from the corner of the area that left Mignolet rooted as it swept over the wall and into the bottom corner.

The second half began with an opportunity for Ibe to restore the lead for Liverpool, but he drilled into the side netting from a tight angle.

Next, Chung-Yong Lee skewed off target when teed up by Bolasie before Philippe Coutinho struck inches over in front of the Kop at the other end.

Jordan Henderson then sent a bouncing half-volley the wrong side of the upright, but Palace went 2-1 in front when Zaha scored within seconds of entering play as a substitute.

The Reds half-cleared a free-kick into the box and possession was pounced upon by Bolasie, who raced into the area and sent a low centre across goal for Zaha to tap in with his first touch at the back post.

Rodgers' response saw a double change with Rickie Lambert and Lucas Leiva replacing Ibe and Lallana for the final 25 minutes.

But Bolasie could have furthered the visitors' lead when he cracked an effort against the crossbar having stepped inside Moreno's challenge.

As time ebbed away, Liverpool tried in vain to restore parity, but ultimately it was to be Palace's day in terms of the result, as substitute Murray netted after Mignolet had saved his initial stoppage-time penalty.

Overall, however, this day belonged to one man - and the scenes of sheer emotion at full-time made clear just what Steven Gerrard has done for Liverpool Football Club.

He entered the pitch all those years ago a gangly teenager looking to make his mark at his boyhood club. 709 appearances, 185 goals and 10 trophies later, there is no denying he achieved exactly that.