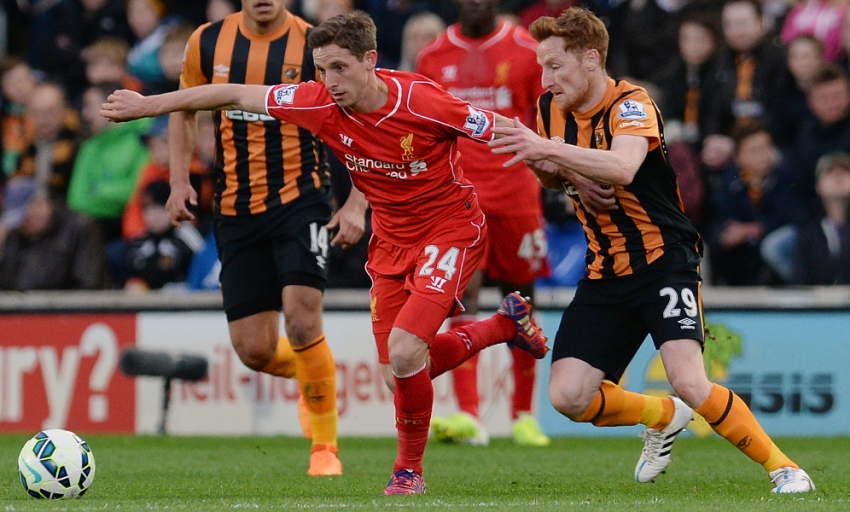 Liverpool's hopes of catching the Barclays Premier League top four were damaged by a 1-0 defeat against Hull City on Tuesday night.

Eight minutes before the interval, Hull captain Michael Dawson took advantage of space in front of goal to flick a header into the bottom corner and give the relegation battlers a lead to protect.

The Reds largely dominated possession during the second half but, as at West Bromwich Albion on Saturday, could not turn that control into goals.

There was one change to the Liverpool line-up as Joe Allen returned to the centre of midfield, with Steven Gerrard rested.

Simon Mignolet's recent run of clean sheets - six in the previous nine games - was first threatened on seven minutes when Sone Aluko spun a cross into the middle from the left for strike partner Dame N'Doye to attack. The header was dangerous, but the goalkeeper moved quickly to save.

A slide-rule pass by Philippe Coutinho into the run of Glen Johnson along the left flank opened up a chance to find the waiting Mario Balotelli inside the area. However, the delivery was skewed into Steve Harper's hands.

Into the 20th minute and the Brazilian was again at the centre of creativity. A corner routine from the training ground saw Jordan Henderson whip a low ball away from the bustle of the box to Coutinho, whose instant drive toward the target was beaten out by Harper.

Half an opportunity fell to Balotelli next, though it was mostly out of the Italian's invention to try a powerful backheel - which was straight at the 'keeper - after being teed up by Raheem Sterling.

Based in a left wing-back role, Robbie Brady was causing problems for Emre Can at times with his direct running and pace and one such burst forward brought a flying stop from Mignolet as he thundered a strike on the angle.

Jake Livermore contorted his body to immediately nod the rebound back at goal, but again the Belgian was equal to the effort and the Reds cleared.

Harper comfortably collected a long-ranger from Coutinho, gliding into shooting territory with his usual grace, and the hosts then found the breakthrough themselves.

A Hull corner was allowed to drift to the back post and Ahmed Elmohamady accepted the invitation to return the ball to the danger area, where Dawson rose to glance a header past the stretch of Mignolet and into the net.

Henderson sought a rapid response by latching onto a cross from Jordon Ibe but the midfielder's clipped effort was too central and the teams retired for half-time with the score at 1-0.

For 10 minutes after the resumption of the game, the football from both sides was scrappy, and it was Steve Bruce's charges looking the more likely to find the target.

It was shortly past the hour mark when Harper was forced into an important save.

Coutinho was the schemer, moving forward and lofting a pass into the supporting Henderson 15 yards out. The captain for the night controlled and volleyed in one swift movement, but fingertips prevented an equaliser.

Rodgers decided on a double switch to help that search - Ibe and Balotelli were withdrawn, Adam Lallana and Rickie Lambert sent on.

The Coutinho and Henderson combination produced another opening, this time the No.10 pulling the ball back for his teammate to drill from the edge of the box. Harper scooped it up at the second attempt.

Sterling was the next recipient of the Brazilian's approach work but his side-foot curler was again too straight to genuinely concern the Hull custodian.

Substitute Lallana went close by dribbling inside from the right wing and dispatching a swinging shot with his left boot, but the hit travelled wide and time ran out.