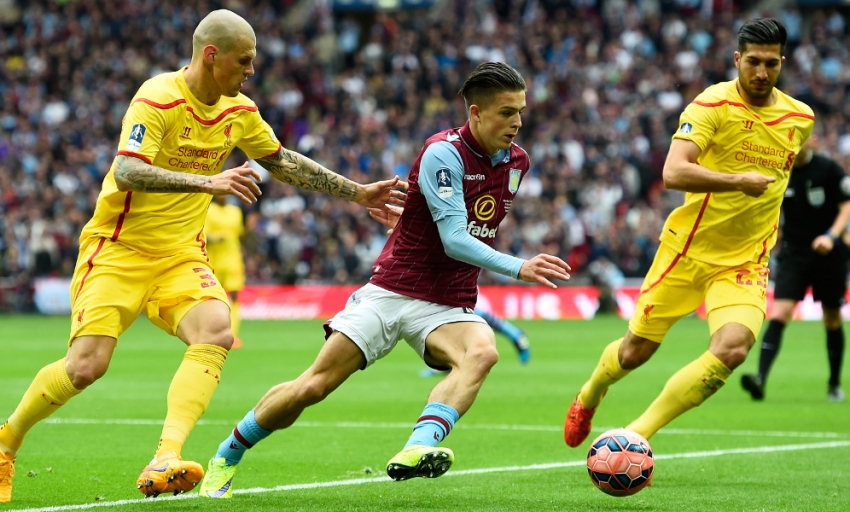 Liverpool's dreams of FA Cup glory came crashing to a halt as they were beaten 2-1 by Aston Villa in their semi-final at Wembley on Sunday.

Philippe Coutinho's knack for notching in this competition continued when he pounced with 30 minutes on the clock, side-footing home to grab an advantage at the national stadium.

But Reds fans had barely concluded their gleeful celebrations when Christian Benteke - so often a scorer in meetings with Brendan Rodgers' team - clipped an equaliser past Simon Mignolet from 12 yards.

Fabian Delph was a relentless runner in Villa's midfield and his exertions brought a second for his side nine minutes after the break, dealing Liverpool's chances a serious blow.

Steven Gerrard had a header cleared off the line but they could not produce the necessary response and their hopes of lifting the trophy for an eighth time were extinguished.

Confirmation of the teams pre-match revealed that Gerrard and Martin Skrtel were back in the starting XI after serving three-game suspensions, while Lazar Markovic lined up due to Jordon Ibe's ineligibility.

Liverpool quickly took control of possession from kick-off, happy to retain the ball with short passes across the back and to either flank in the search for a gap.

In terms of early openings, Joe Allen swiped at a 20-yarder that was high and wide and Jordan Henderson dragged a low shot off target to the left from a similar distance.

At the other end, Charles N'Zogbia spun into space to shoot and wasted little time in blasting one towards Mignolet's goal. His dipping strike was perhaps travelling over, but the Belgian's fingertip intervention was important all the same.

Even more crucial was the outstretched leg of Dejan Lovren as Tim Sherwood's side threatened with a two-on-one scenario from the halfway line. The Reds defender was positioned well to prevent N'Zogbia from releasing Benteke clean through.

Villa's physical threat was obvious and with Benteke taking up semi-permanent residence on the shoulder of Emre Can for direct knocks forward, the Midlands outfit were finding a way to gain territory.

But on the half-hour mark, Liverpool's FA Cup magician once more made his mark.

Henderson's cutback had narrowly missed Gerrard but Raheem Sterling scooped it up and slid a delight of an assist into Coutinho's run. The No.10's balance and control took him into the area despite heavy pressure and earned the luck of a finish that deflected off substitute Jores Okore and beyond Shay Given.

The travelling Kop erupted but their joy was short-lived. Six minutes later, Delph surged into the left channel and accurately picked out Benteke, who found a precise path to direct his effort away from Mignolet's reach and into the net.

Lovren was left unmarked from a corner shortly before the break but could only nod wide, leaving the score all square at the interval - a fair reflection of what had unfolded.

When Rodgers' players ran out for the second half, wholesale alterations had been ordered. On came Mario Balotelli, replacing Markovic, and a 3-4-2-1 formation became 4-3-3.

The workload soon increased, though.

Benteke had already tested Mignolet before helping in the build-up to edging the opposition ahead. The tricky Jack Grealish spotted another supporting run from Delph and the Villa captain coolly sidestepped Lovren and fired into the near post for 2-1.

As the contest entered its final quarter, the supporters forming a mass of red rose to watch Gerrard deliver a set-piece from the left. Hope sprung, but the cross drifted into Given's grateful hands.

The structure of the game was slowly dissolving and when the Reds committed to attacking a corner, Sherwood's charges launched a counter-attack. Benteke looked to be free, until Alberto Moreno wrapped his left foot around the striker and cleared in one motion.

With 10 minutes remaining, Gerrard stood over a free-kick again. It was trademark territory for the No.8, though on this occasion his curler took a nick off the wall and sailed comfortably to the goalkeeper.

The captain went closest to levelling by rising to meet a corner and glancing a firm header towards goal, but Kieran Richardson nodded away off the goalline and there will be no fairytale return to Wembley for Liverpool next month.