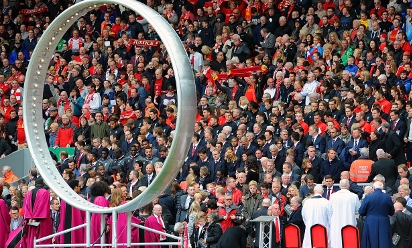 The annual Hillsborough Memorial Service took place at Anfield on Wednesday to mark the 26th anniversary of the tragedy - watch the entire event on demand now.

LFCTV GO will be showing the day's schedule via a live simulcast of the club's official TV station, LFCTV. This service will be available online at liverpoolfc.com/video from 10am BST until closedown at 1.30am BST on Thursday April 16.

Supporters in the UK and Ireland with a Sky box or any Virgin Media subscription will also be able to access LFCTV's day-long coverage with no channel subscription.

As ever, coverage of the Hillsborough Memorial Service from Anfield takes centre stage in the day's schedule, with our live broadcast starting at 2.40pm BST.

Please note that in adhering to the Attorney General's reporting restrictions, the service will once again be covered live up to approximately 3.07pm BST. However, the service will be shown in full at 6.30pm and 9.30pm BST later that evening.

In other programming, families of those who lost their lives in the disaster pay their own tribute to their loved ones in a major new programme titled More Than a Number.

How to watch Hillsborough anniversary coverage on Wednesday April 15:

In the UK and Ireland, LFCTV is available on Sky channel 429 and Virgin Media channel 544 (UK only).

Watch a live simulcast of LFCTV by visiting www.liverpoolfc.com/video