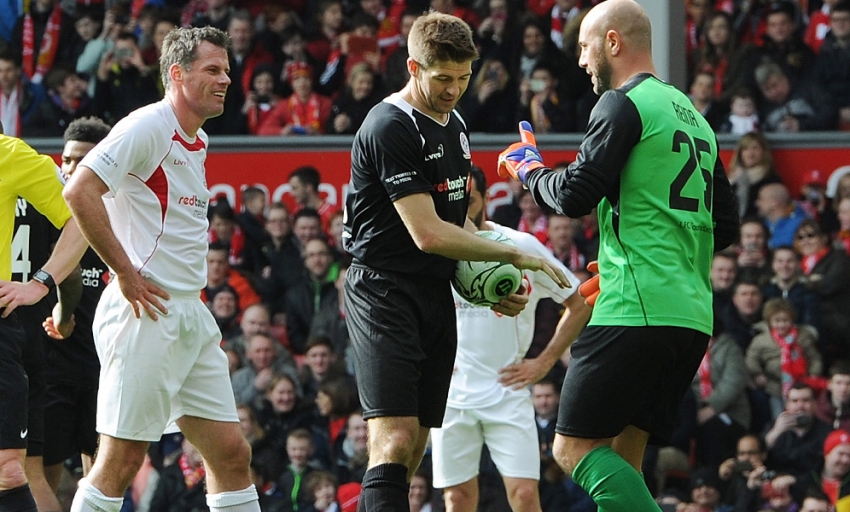 The best photos from All-Star showdown

Sunday's All-Star charity match at Anfield fittingly concluded in a 2-2 draw after Steven Gerrard scored twice from 12 yards for his XI to respond to an early flurry from Jamie Carragher's line-up.

A sumptuous, searing hit from Mario Balotelli broke the deadlock early on for Carragher's XI, and the advantage was doubled midway through the first half when a touch of Didier Drogba class brought a second.

Gerrard converted a spot-kick in typically adroit fashion shortly before the break to reduce the arrears and set up a fascinating second period, especially as he then added the prolific shooting boots of Luis Suarez and Fernando Torres to his team.

It was the talisman himself who restored parity with another penalty as his side suddenly began to dominate proceedings, but no further goals were registered and perhaps the fairest result was settled.

Organised by the Liverpool FC Foundation over several months, the match was an opportunity for a number of illustrious names from the club's past to return and experience the unique feelings of playing in front of the Kop one more time.

Welcomed back were the likes of Xabi Alonso, Craig Bellamy, Luis Garcia, Pepe Reina, Suarez and Torres, joining a host of elite players past and present, current Reds stars and talents from the Academy in Kirkby.

Charitable causes were equally at the forefront - funds raised from the event will be used to help not only the important programmes of Liverpool's official charity but also Alder Hey Children's Hospital and various organisations in the city.

After nine minutes of understandably patient play, Balotelli had seen enough. The Italian forward took in a short pass from Jonjo Shelvey 20 yards from goal on the left, turned and whipped a low blast beyond the stretch of Brad Jones.

Shelvey was thwarted from a similar distance, Alonso looped a half-volley off target as the entire ground sensed a trademark moment of technique from the midfielder, and John Arne Riise unleashed a free-kick that Reina handled impressively.

When the initial squads were being decided earlier in the month, Carragher insisted that his was more balanced - and the opening half-hour provided little evidence to disagree. Balotelli and Drogba, particularly, were in menacing mood.

And it was a connection between the two on 22 minutes that allowed the latter - so often a scourge of the Reds - to surge onto the former's lovely through ball, sidestep the outrushing Jones and tap home for 2-0.

Jerome Sinclair, back temporarily from his loan at Wigan Athletic, showed his dribbling skills by dancing in from the left flank and driving an effort toward the near post. Again, Reina was in the way. But he would soon be picking the ball out of the net.

Gerrard looked to rampage through the middle eight minutes before the interval and sought Sinclair inside the area. The young striker was upended by Martin Kelly and the Liverpool captain made no mistake by putting his penalty kick perfectly in the corner.

A raft of changes for each side for the second half involved the much-anticipated introduction of Suarez and Torres, the pair greeted with an audible roar of appreciation from Kopites as they ran out to spearhead the attack of Gerrard's XI.

It didn't take long for the Gerrard-Torres combination that once terrorised defences at home and abroad to ease into gear. The No.9 teed up his former skipper with a nimble flick and the midfielder was unlucky with his dinked finish.

The super-competitive Bellamy was always going to cause problems on behalf of Carragher's outfit and Jones' handling had to be precise when the Welshman took charge of a central set-piece and clipped it low and true.

But, with exactly a quarter of the contest remaining, it was level. Gerrard darted to the right and squared in the direction of Suarez, who hit the floor under pressure from Carragher. Another penalty and another goal for the Reds icon.

With Suarez and Torres such a threat, Gerrard feeding them at every chance and the Kop clamouring for either or both to find the target, their opponents dropped deeper and deeper to protect their net.

As the clock ticked away, the Uruguayan stood over a free-kick and the Kop waited. They had seen him send the ball into the top corner from such a position many times, but on this occasion Suarez's attempt sailed high over the crossbar.

Garcia trickled one wide of the right post from close range but neither All-Star team could produce a winner. But nobody was complaining - quite the opposite, as all involved set off on a lap of honour around Anfield.