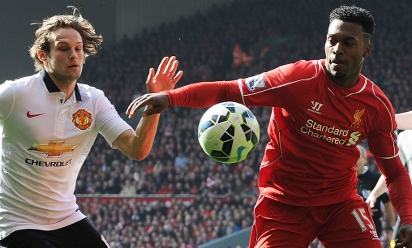 10-man Liverpool's ambitions of a top-four finish were dealt a blow after they were beaten 2-1 by Manchester United at Anfield on Sunday.

The visitors took a 14th minute lead when Juan Mata collected Ander Herrera's threaded pass in behind and dispatched into the far corner from close proximity.

The Reds' hopes of taking something from the contest were dashed when Steven Gerrard - introduced as a substitute at the interval - was sent off just 48 seconds after coming on following a challenge with Herrera in the second half.

Mata then added a second goal for United when he acrobatically volleyed Angel Di Maria's pass into the net, but Daniel Sturridge's near-post finish reduced the deficit with around 20 minutes remaining.

Simon Mignolet saved a Wayne Rooney penalty in stoppage-time, but Louis van Gaal's side were able to hold on for the victory.

The pre-match team news confirmed an unchanged Liverpool line-up to the one that started Monday's 1-0 win at Swansea City. On the bench, however, returned Lucas Leiva after injury.

That result in south Wales meant the teams went into today's showdown separated by just one place and two points in the Barclays Premier League table, with the visitors holding the narrow advantage in the race for Champions League qualification.

But an unbeaten run of 13 matches meant Liverpool were the division's form team and a deafening din inside Anfield greeted kick off as the home supporters set out their stall to do their bit in the sunshine.

It made for a typically frenzied opening to the afternoon - but it was United who struck first with 14 minutes on the clock.

Herrera collected possession inside the Reds' half and slid a precision ball through for Mata to latch onto and steer across Mignolet and into the far corner.

In truth, Van Gaal's men had enjoyed the majority of possession in the opening exchanges and posed the greater attacking threat.

Liverpool had yet to hit their stride, though Alberto Moreno's fizzing cross on the half-hour was cause for momentary panic as it narrowly evaded the unmarked Jordan Henderson.

Then, with 35 minutes played, a sign of promise. Henderson's raking cross from deep found Sturridge's run to the back post. With his first touch, he cushioned a pass into the stride of Adam Lallana, who drilled wide of the upright.

The hosts were beginning to rouse, though the sound of the half-time whistle presented Rodgers with an opportunity to evaluate the opening 45 - and the manager elected to introduce Gerrard into the action, replacing Lallana.

However, the captain's afternoon lasted less than a minute as he was shown a red card by referee Martin Atkinson following an incident with Herrera.

The home team were going to need to dig even deeper - and Philippe Coutinho had Red hands on heads when his 35-yard rasper narrowly evaded the crossbar.

But just before the hour, United's advantage was extended. Substitute Di Maria flicked a pass into the path of Mata inside the Liverpool box, and he found the corner with a well-executed scissor kick.

Mario Balotelli was next to enter the action, replacing Moreno, as the Reds attempted to engineer a response - and one duly arrived on 69 minutes.

Coutinho ducked and weaved outside the area before slipping a pass into Sturridge's path inside the right channel of the area. The striker did the rest, smashing beyond David de Gea at his near post to offer hope.

Roared on by the Anfield crowd, Liverpool toiled hard in search of an equaliser and even though Mignolet saved an injury-time penalty from Rooney after Emre Can was adjudged to have fouled Daley Blind, it ultimately wasn't to be their day.