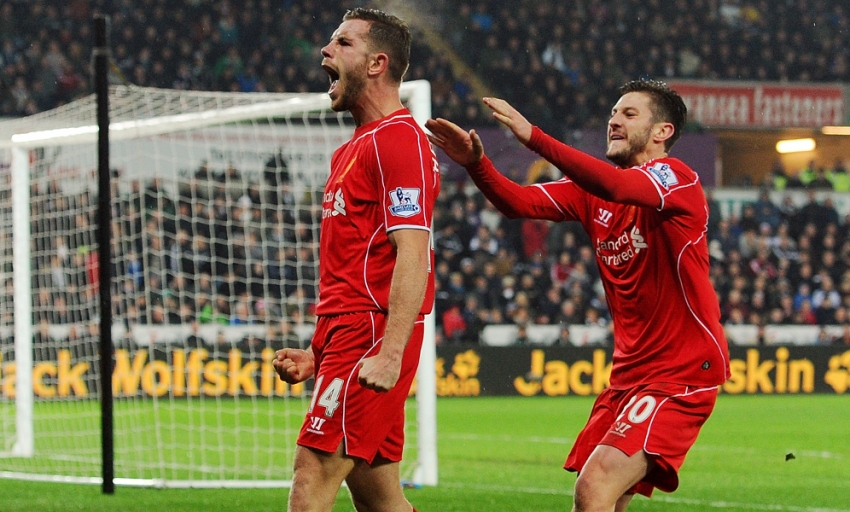 The Reds were under pressure for much of the opening period at the Liberty Stadium but weathered the storm and turned the tide successfully following the break.

Fortune smiled on the travellers in the 68th minute, when Henderson surged in behind and Jordi Amat's attempted clearance bounced off the midfielder, over the goalkeeper and into the net.

That fluke moment settled the contest, keeping Brendan Rodgers' team in touch with the top four and extending their unbeaten run in the division to 13 matches.

The manager made three changes to his starting line-up in Wales - Joe Allen, Alberto Moreno and Mamadou Sakho all returned - while Steven Gerrard was named on the substitutes' bench after more than a month out.

Swansea's initial flurry matched the boisterous music pumped into the stadium in the final moments before kick-off, as Garry Monk's side tried to give Liverpool a taste of their own medicine.

Aside from a Daniel Sturridge snapshot that was pulled wide to the left from 20 yards out, it was the hosts harrying opponents at every touch and seeking to bypass the backline with direct, precise passes through the channels.

It almost worked to perfection for Bafetimbi Gomis on the quarter-hour. The striker was primed to finish, cutting into the area from the right flank, until Allen crucially sprinted back and clawed the ball away with a superb sliding tackle.

Martin Skrtel's thoughtful positioning was next to prevent the Frenchman, who nodded a header at the far post back across goal and toward the corner only to find the Reds' Slovakian centre-half a stubborn obstacle.

Another Swansea attack, another Gomis opening in the box and another vital recovery by Allen. But the chance was still alive, requiring Simon Mignolet to sprawl from his goalline and thwart Gylfi Sigurdsson's intentions.

It was something of the Gomis show at times in the first half, taking full advantage of the service and industry of Jonjo Shelvey, Sigurdsson and others.

On 30 minutes a rapid, training ground one-two between him and Wayne Routledge cut out Emre Can; the former opted to strike early, punting a low effort that was destined for the net until Mignolet stretched out a palm to block.

The Belgian was then required to make an even better stop. Adam Lallana's endeavour kept out Gomis' latest blast, but Sigurdsson followed up with a side-foot curler that the Liverpool goalkeeper was at full stretch, diving left, to save.

Shelvey - and the majority of the home crowd - were convinced he'd scored from a well-worked corner routine shortly before the interval. However, a deflection sent the shot wide.

Which meant Monk's charges returned to the dressing room at half-time bemused by their failure to break the deadlock, while the Reds were glad of an opportunity to regroup for the second period.

And it was a more authoritative Liverpool that emerged. Sakho, in particular, keenly took up the task of shackling Gomis by closing the forward more quickly and moving his body between player and ball with greater purpose.

With 57 minutes on the clock, Swans 'keeper Lukasz Fabianski was worked in earnest for the first time, forced to deny Philippe Coutinho's near-post attempt after Raheem Sterling and Sturridge combined to create for the Brazilian.

On came Gerrard for his first appearance since the Anfield victory over Tottenham Hotspur on February 10, slotting into central midfield as Rodgers reworked the system in search of a breakthrough.

Allen could have provided it when he ghosted into the area unattended and was found by Lallana, crossing in from the left wing. The former Swansea midfielder aimed to the right on a diagonal but Fabianski collected coolly.

But on 68 minutes, Lady Luck made all the difference. Henderson burst forward to reach a knock over the top and forced Amat to cover - his tackle was well-executed but merely clattered against the Liverpool No.14, over Fabianski and in for 1-0.

Buoyed by their fortune, the Reds assumed command of proceedings from then on and Coutinho was inches away from doubling the advantage with one of his trademark long-range, dipping hits from distance.

Sturridge hit the post in stoppage time but they didn't need another. Instead, that freak bounce proved enough to continue a stunning run of form and maintain confidence among Rodgers' men ahead of Manchester United's visit to Anfield.