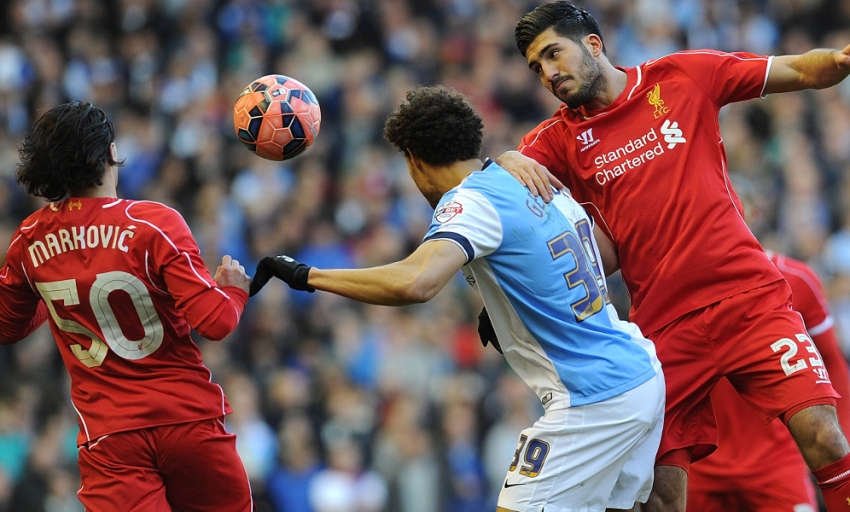 Liverpool and Blackburn Rovers will need another 90 minutes of football in order to decide which team progresses to the semi-finals of the FA Cup following a 0-0 draw at Anfield on Sunday afternoon.

As was the case in the fourth round of the competition, when Bolton Wanderers clinched a stalemate in L4, the Reds will now face a replay at Ewood Park, with a place at Wembley in the semi-finals at stake.

Visitors Blackburn defended staunchly in Sunday's quarter-final. They were compact and intense when it came to stifling Liverpool and nullifying the Reds' creative talents en route to forcing a repeat of the encounter.

The home side zipped the ball about the Anfield turf for two minutes after the game got underway, but before the Reds could find a rhythm, Martin Skrtel was sent crashing to the floor after a collision with Rudy Gestede. The Slovakian lay on the pitch for eight minutes as Anfield looked on anxiously.

When he was placed onto a stretcher and carried from the turf, the entire stadium rose in applause as Kolo Toure ran on to replace him and the vocal Blackburn contingent in the lower Anfield Road broke off from their incessant chanting to join in the tribute to the Liverpool man.

When play resumed, the Reds moved the ball quickly and with precision. Emre Can and Jordan Henderson found space in the middle of the park. Daniel Sturridge tucked a clever pass between the lines for Raheem Sterling, before Henderson slid the play to Sturridge, but both attempted balls were too heavy.

Sterling tricked his way in from the left, ducking and weaving, leaving blue and white shirts flummoxed in his wake and causing chaos with his cross into the centre, which ricocheted around the penalty area before floating wide of the post.

Lazar Markovic zipped a first-time pass into the feet of Adam Lallana, who had sauntered into space in the box, Matthew Kilgallon came through the back of the midfielder and sent him tumbling to the floor. Andre Marriner, the referee, adjudged the Blackburn man to have caught the ball and waved away loud penalty appeals.

Rovers took control for a spell. Toure was needed to thwart Ben Marshall before Glen Johnson reacted fast to chest the ball around the post with Gestede lurking behind him. Still the pressure came. Toure cleared a cross from Marshall, while Simon Mignolet was called on to catch Gestede's flick from the resulting corner.

Liverpool needed to settle. Blackburn had set up with two closely knit banks of four and they were happy to allow Henderson and Can time on the ball, but they closed Philippe Coutinho and Lallana ruthlessly, while the threat of Sturridge was almost entirely neutralised throughout the first half.

Gestede was winning everything in the air and so Brendan Rodgers shifted Can back to help battle the Frenchman, but not before the forward freed up Marshall, who looked for the return pass, but Sterling was there to block the ball as the striker went to pull the trigger.

Coutinho had been kept quiet, but he came to life with a twist and a turn away from two tackles before curling over the crossbar and into the Kop. Meanwhile, at the other end, Craig Conway arrived into acres of space on the edge of the penalty area but could only swerve a shot over Mignolet's crossbar.

Toure thought he had given Liverpool the lead shortly after when Sturridge rose higher than the rest in the penalty area to meet Coutinho's free-kick and flick the ball on. Toure seized upon a deflection and hammered beyond Simon Eastwood, but the linesman had raised his flag to indicate that the Ivorian was offside.

Eight minutes of added time at the end of the first half, brought about in the main by injury to Skrtel, ensued during which time Sturridge carved his first real opportunity of the game, manoeuvring into space, turning and unleashing a vicious left-footed strike which stung the gloves of Eastwood.

There was early danger for the Reds after the interval when Marshall won a corner after an important interception from Can. From the resulting cross, Alex Baptiste towered above the Liverpool defence and powered a header at goal, but Mignolet flung himself high to push the effort around his post.

At the other end, Johnson lofted a superb pass into the path of Sturridge, who plucked the ball out of the air with his left foot before rifling straight at Baptiste. Coutinho followed up, but he could only slice his attempted effort wide.

Rodgers introduced Mario Balotelli in place of Markovic in the 57th minute and as the Italian jogged into position, Coutinho whipped a swerving set-piece into the box and Toure was there to meet it. The Ivorian connected but nodded straight at the post. Like the first time, however, he was adjudged to have been offside and so his effort would not have counted.

Blackburn were regimented and compact. They closed Sterling with callous intensity. The youngster found himself hemmed in by three players at one point, each snapping at his heels in pursuit of the ball, while the playmaker, Coutinho, had to drop deep to try to find any space to work.

Then came a breakthrough of sorts - a glimpse of goal fashioned by Balotelli, who arced the ball over his shoulder and into the path of Sturridge. He arrived to connect with the bouncing ball, but could only skew his shot wide of goal.

Anfield urged the Reds on and they encircled Blackburn, penning them back with constant pressure. Balotelli missed Lallana's cross by inches and Henderson rifled a vicious effort on goal which Eastwood was able to block with his body.

Coutinho whipped a pass out to Johnson, who served a tantalising cross into the middle, which flew beyond Balotelli and into the path of Sterling, but he could only steer the ball wide with an off-target header and there was to be no breakthrough, meaning the sides will meet again at Ewood Park.