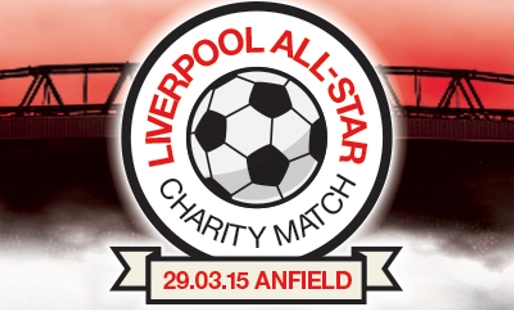 A unique charity football match to benefit the people of Liverpool will take place at Anfield later this month, which will include two All-Star line-ups of some of Europe's elite players.

The event, which has been organised by Liverpool FC's official charity, the Liverpool FC Foundation, will bring together two teams that will be selected by Steven Gerrard and Jamie Carragher as some of the most influential players they have played with or against.

Gerrard will take on the role of captain for one team, while Carragher will take on the same role for the other All-Star side. Managers and the final line-up of each All-Star team will be announced in the coming weeks.

Current Reds first-team players who are not on international duty will also play some part, as well as some of the Academy's brightest stars, plus the club's backroom staff will also be on hand to offer support.

Gerrard will leave Liverpool at the end of the season and this special match will give fans the opportunity to see him alongside some of their favourites - all to raise funds for the local community.

Tickets for this exciting event, which will take place on Sunday March 29, 2015, kick off 3pm, will be priced at £20 for adults, £5 for juniors* and £15 for over 65s. Disabled concessionary prices will also apply.

Proceeds raised will help to fund the Liverpool FC Foundation's community programmes, which benefit thousands of young people and adults throughout the city of Liverpool.

Tickets will initially be available to season ticket holders and LFC members from 1pm on Thursday March 5, with a general sale to follow at 8.15am on Wednesday March 11.

For wheelchair, visually impaired and ambulant disabled tickets, please telephone 0843 170 5555 and select the disability option to speak to one of our advisors.

*Adult/junior tickets are available to purchase at a ratio of 3:1. There will be no booking fee charged for this match.

*Please note that each player's involvement in the game, including the duration of each player's appearance, is subject to players' club approval, international duty obligations and fitness at the time of the match.