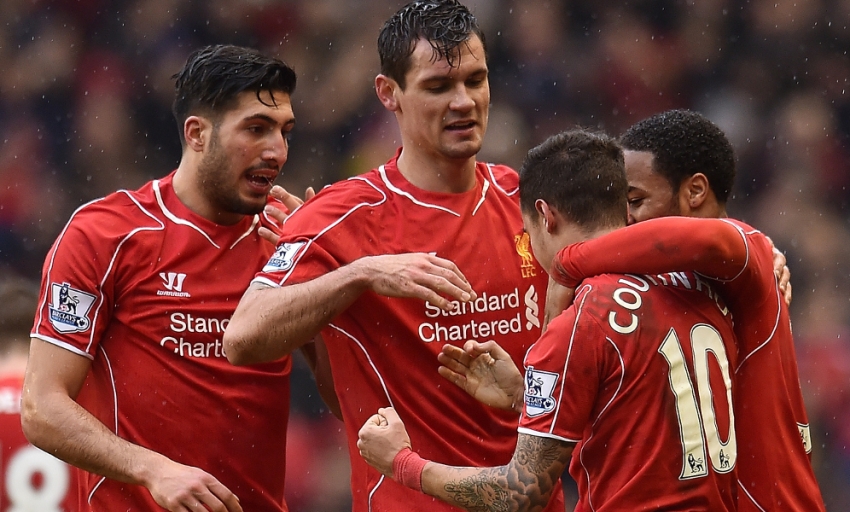 Another incredible long-range finish from Philippe Coutinho carried Liverpool to a thrilling 2-1 victory over Manchester City as history repeated itself in the Barclays Premier League on Sunday.

Jordan Henderson had the home crowd leaping out of their seats shortly after they had taken them, when he launched a piercing strike from range that swung around and past the goalkeeper's flailing hand.

A reminder of the visitors' capabilities was served a minute later as Sergio Aguero rattled a post, and he soon turned provider with a neat assist for Edin Dzeko to clinically equalise with 25 minutes on the clock.

The second half saw both sides threaten a decider, but it was the hosts who found it. Coutinho, the match-winner in a classic between these outfits last season, summoned a blistering strike on an angle that settled the contest in the Reds' favour.

Four changes to the starting XI were confirmed before kick-off, as Brendan Rodgers brought in Coutinho, Henderson, Adam Lallana and Lazar Markovic to freshen his options following their exertions over 120 minutes in Turkey on Thursday.

A tight, cramped beginning to the encounter offered no hint of the sudden surge of chances that would catapult Liverpool into an 11th-minute lead against the champions, who almost levelled within moments.

First Coutinho looked up in possession and saw Lallana racing into huge space in the middle, and the Brazilian found his teammate with a poked through ball. The No.20 retained control with awkward balance on the run but his finish was too close to Joe Hart.

The same duo combined seconds later, Coutinho finding Lallana at the near post from the byline. This time he thundered a volley at goal and the net was rippling, fans were on their feet. A raised flag by the linesman cut short the celebrations, however.

They were soon free to continue. Yet again Coutinho was involved, stealing the ball from Vincent Kompany and moving it forward to Raheem Sterling, who quickly laid back for Henderson. The skipper's intentions were clear, his technique faultless, rocketing a picture book curler into the top right corner from 20 yards.

Anfield was raucous, though very nearly silenced when David Silva sprayed one over the top of the Reds' backline and into Aguero. The lethal Argentinian saw the narrow shooting angle as no hindrance and clipped a left-footer across Simon Mignolet and off the far post.

Alongside Aguero in the visitors' attack was Dzeko and it was a combination between the two that restored parity on 25 minutes. The former's visionary reverse pass was perfectly weighted for the latter to swipe a first-time finish home from inside the box.

By now the game was much more stretched, which allowed Markovic to drift in from his right hand station to the edge of the City area and loft an inviting delivery towards Lallana. Contorting his body to redirect a shot in the opposite direction, the England international watched it bounce wide.

Seeking another masterpiece to add to his recent collection, Coutinho, once more such an influence on Liverpool's work, shaped a long-range blast as the half concluded that was at a comfortable height for Hart, heralding the interval with the score locked at 1-1.

That could have changed just 20 seconds after the restart. Pablo Zabaleta scampered up the wing to support, taking Samir Nasri's tee-up and crossing for Aguero, who nodded a header narrowly too high to beat Mignolet at the Anfield Road end.

Intricate approach work from the Reds in response released Lallana in the right channel and his first-time sweep along the six-yard box seemed destined for a simple Sterling conversion until the covering Zabaleta did enough to thwart the 20-year-old as he shot.

As the hour mark arrived and passed, the match was poised on a knife-edge, both teams carving out opportunities to grasp an advantage while ever conscious of the risks inherent in committing too many personnel to that cause.

Daniel Sturridge had conducted a lengthy warm-up as light rain fell on the Anfield turf and with a quarter-of-an-hour remaining to produce a game-changing moment, Rodgers was preparing to introduce the striker against one of his former clubs.

But the decisive impact happened before he could get on. Coutinho's stock in trade for the past month has been sensational efforts from distance and he mustered another one for the memory banks here.

There seemed little danger for City to consider as he stepped forward on the left wing, but a drop of his shoulder fooled Nasri into conceding space. The Brazilian took total advantage, whipping a screamer from the corner of the area that Hart could only see sail beyond him.

The indefatigable Aguero dispatched a worrying low effort just wide having created a chance for himself, but Manuel Pellegrini's team could not match what Coutinho produced and the Reds could bask in three more crucial points and an 11th Premier League game unbeaten.