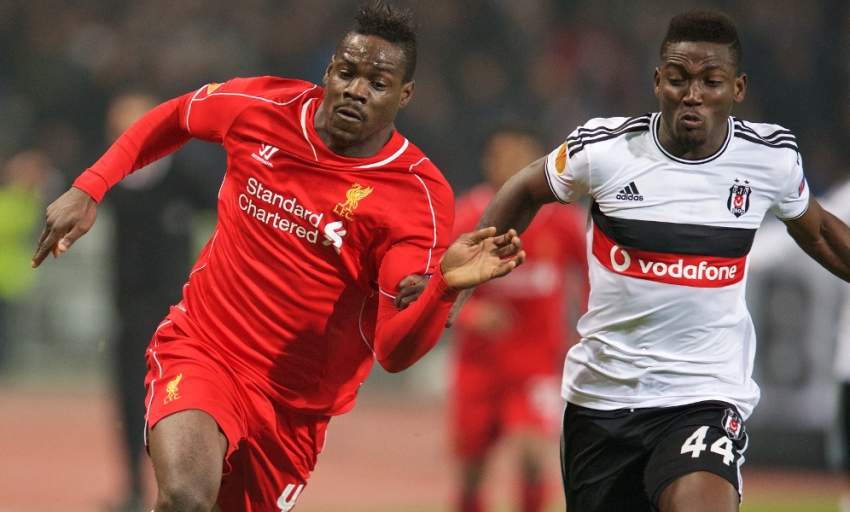 Liverpool suffered Europa League elimination after they were beaten 5-4 in a penalty shootout by Besiktas following a 1-0 loss in normal time in Istanbul on Thursday night.

Tolgay Arslan restored parity in the tie when he netted the game's only goal on 72 minutes, finding the top corner with a first-time strike from Demba Ba's lay-off.

Ba then rattled the crossbar in added time as Besiktas sought a winner, but with the aggregate score poised at 1-1, extra-time and then penalties were required at the Ataturk Stadium.

The first nine were all successfully converted, but Dejan Lovren struck the final kick over the crossbar and the Reds exited the tournament at the last 32 stage.

It meant the pre-match teamsheet showed four changes, including starts for Mario Balotelli and Daniel Sturridge in attack. Meanwhile, Kolo Toure and Alberto Moreno also came into Brendan Rodgers' XI, while Academy pair Cameron Brannagan and Jordan Williams were on the bench.

The venue for the tie was one with a strong emotional bond with Liverpool Football Club.

The Ataturk Stadium was, of course, the scene of the 2005 Champions League final victory over AC Milan - and though the Reds have since returned to the setting (in December 2006), it was somewhat fitting that almost 10 years on from that incredible night, the club should be back at the scene of perhaps their finest ever triumph.

The contest got underway in a sheer cauldron of noise as the home supporters attempted to roar, whistle and chant their team back onto level terms in a tie they trailed 1-0 thanks to a late Balotelli penalty at Anfield one week prior.

Besiktas' players responded by snapping into every early tackle in a bid to stamp their authority on the clash in the opening exchanges.

But it was Liverpool who fashioned the game's first real chance with 20 minutes played. Moreno's tenacity down the left after receiving the ball from a Balotelli flick resulted in the ball breaking for Raheem Sterling on the edge of the box, but his drilled effort was beaten away by the fists of Cenk Gonen.

The Reds' threat was growing with each passing minute, and a counter-attack created the next opportunity of the evening. Once again it was Sterling who had it, but this time his swivel and hook was blocked by Necip Uysal.

Next, Sturridge brought a smart reflex stop out of Gonen after Balotelli had intercepted possession midway inside the Besiktas half and played in his strike partner, before a near-post prodded effort from Moreno was swept up by the home goalkeeper.

By now, the decibel levels had decreased by a few notches, but Olcay Sahan's run and strike threated to raise the noise once again had it not been for the fists of Simon Mignolet. As it was, half-time was reached with the scoreline still goalless and Liverpool in control of their own destiny.

Besiktas started the second period with clear intent and Serdar Kurtulus and Jose Sosa each tried their luck in the early exchanges; however, Mignolet was able to thwart on both occasions.

The home side's threat had grown considerably, and Arslan was left clutching his head in his hands when a blast from range narrowly evaded the upright.

But the substitute fared better on 72 minutes when he fired in the evening's opening goal and levelled up the aggregate score.

Gokhan Tore's ball into Ba was flicked off by the striker to Arslan inside the 'D', and he picked out the top corner with a first-time curler.

Rodgers responded by introducing Javier Manquillo and then Adam Lallana into the action, with Jordon Ibe and Balotelli making way.

But Besiktas were in the ascendancy and almost won it at the close when Ba pounced on a bouncing ball inside the box to smack a half-volley against the crossbar from yards out.

With no further goals, the evening progressed into extra-time and the Turkish team continued to push; Daniel Opare, Ba and Tore all taking pops at Mignolet's goal in the minutes after the restart.

But the additional 30 minutes failed to yield another strike, meaning penalties would be required to determine the winner.