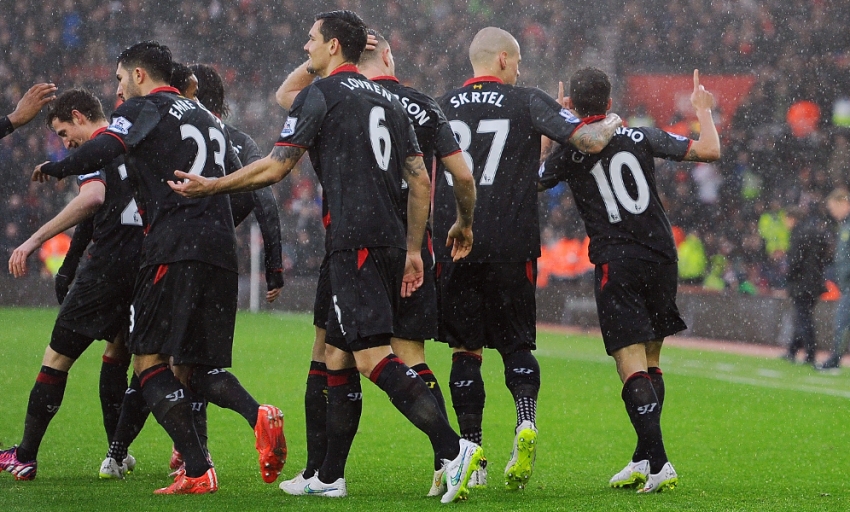 Liverpool closed the gap on fourth place in the Barclays Premier League to just two points with a hard-fought 2-0 victory over Southampton at St Mary’s on Sunday.

Philippe Coutinho put the Reds into a third-minute lead with a goal of the highest order - finding the top corner from range with a ferocious drive that left Fraser Forster grasping air.

The showdown between the Champions League qualification chasing rivals proved engrossing, with the Saints threatening on several occasions.

However, Raheem Sterling decided the outcome on 73 minutes, drilling Matt Targett's wayward clearance into the back of the net and sending Brendan Rodgers' side into sixth in the standings.

Liverpool made three changes from Thursday's win over Besiktas. Mamadou Sakho was ruled out with a hip injury, so Dejan Lovren stepped in against his former employers. Sterling and Lazar Markovic also returned to the starting XI, with Daniel Sturridge and Alberto Moreno dropping to the bench.

With plenty at stake on the south coast, the game began at an incredible pace in dreadful weather conditions.

There was less than a minute on the clock and the hosts were baying for a penalty when Filip Djuricic went to ground under a challenge from Emre Can as he made his way into the area.

Referee Kevin Friend waved away the appeals and Liverpool broke forward - to devastating effect. Coutinho took possession of the ball 25 yards from goal and let fly with a swerving drive that thundered against the underside of the crossbar and bounced over the line.

The visitors' celebrations were almost instantly muted when Djuricic crashed to the turf inside the area once more - this time under the attentions of Joe Allen. Again, play was allowed to continue and the ball broke for Eljero Elia, whose close-range shot was turned around the base of the post by Simon Mignolet's boot.

But Southampton were asking questions of Liverpool in what was proving a fascinating encounter, while at the other end, the speed and zip of the away team's counter attacks were a persistent menace.

Clear-cut chances remained at a premium, however, until a minute before half-time when Nathaniel Clyne's ball over the top allowed Elia to breach the offside trap and get a clear run at goal. With the ball bouncing, the Holland winger attempted to lift it over the approaching Mignolet, but the goalkeeper managed to spring into the air to block.

Liverpool's custodian was called into action once more before the break, saving smartly from Djuricic at a corner to ensure their lead remained intact at the break.

Rodgers elected to make a change ahead of the resumption of the clash, with Moreno replacing Markovic.

Still, the encounter remained delicately poised - the Reds needed Martin Skrtel to get his body in the way of a turn-and-hook from substitute Sadio Mane to prevent Mignolet from being called upon.

With 62 minutes on the clock, Sturridge entered the action to replace ex-Saint Adam Lallana - and the striker was quickly making a nuisance of himself, supplying a driven centre which Jordan Henderson scooped over the bar from 12 yards.

As the game inched towards its conclusion, Liverpool made certain of a crucial three points when Sterling arrived on cue to make it 2-0.

The No.31 spread the ball wide to Moreno, whose driven centre didn't manage to pick out a teammate; however, Targett's attempt to clear only succeeded in sending the ball back into the danger zone, and Sterling was on hand to steer beyond Forster and send the travelling Kop into raptures.

With Southampton spirits dampened, Liverpool successfully navigated the closing stages to collect what could prove a crucial three points in the race for a top-four finish.