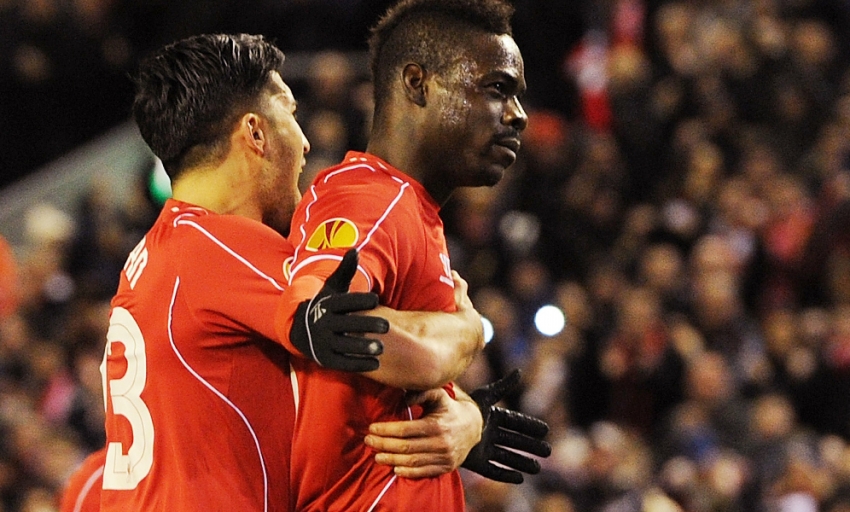 Mario Balotelli's late penalty earned Liverpool a 1-0 victory and slender advantage to take to Turkey, in their Europa League last 32 tie with Besiktas on Thursday evening.

Jordon Ibe's dribble at goal with five minutes remaining of an even clash at Anfield drew a clumsy foul by Ramon Motta and the referee had no hesitation in awarding a spot-kick.

Substitute Balotelli wanted responsibility at the Kop end and showed why by calmly sweeping his conversion successfully to the left as the goalkeeper dived in the opposite direction.

The narrow win means the Reds can travel to Istanbul and the Ataturk Stadium in seven days' time with a lead as they seek to progress to the next stage of the competition.

There was one change to the Liverpool starting XI, with Ibe available after being cup-tied for the trip to Crystal Palace and named here in place of the suspended Lazar Markovic at wing-back in Brendan Rodgers' formation.

The first real sight of goal arrived for, and was almost wholly made by, Daniel Sturridge in the fourth minute of the contest after Ibe's agility had allowed him to dance inside and through two challenges on the halfway line and then poke a pass in behind.

Liverpool's No.15 was onto it immediately. A flick of the foot and swerve of the body carried him brilliantly around the presence of Ersan Gulum near the byline, but the left-foot drive that followed was blocked by Cenk Gonen in goal.

There was little further action during the opening 20 minutes, however, aside from Jordan Henderson's attempt to clip a precise delivery over the away defence and into Ibe's run from the right flank that was planted mere inches off target.

As Rodgers had predicted in his pre-match press conference, Slaven Bilic's outfit set up with a triumvirate of tricksters behind the dangerous Demba Ba in attack - a system that ensured the Reds had to retain concentration at all times.

It was a more straightforward route that perhaps should have brought reward, though. As a curling right-side corner swung into the box, Besiktas captain Veli Kavlak moved off Emre Can and nodded goalwards. Just over.

In April 2014, Ba swept a side-foot shot past Simon Mignolet in front of the Kop for Chelsea. On 35 minutes he found himself in an identical situation, but this time the forward's effort was denied by the strong palm of the Reds' goalkeeper.

Sturridge took charge at a free-kick in shooting distance with keen interest and sent it too high to concern Gonen, who was rather more perturbed and at full stretch when Alberto Moreno put every force on a stunning 30-yarder moments before the break.

The visiting stopper could only watch when Henderson assumed command of a subsequent set-piece. The low, whipped hit from Liverpool's captain for the night was close to perfect but ultimately narrowly wide and the interval was called with the score goalless.

As in the first half, the second period saw an early chance for the hosts. Henderson dribbled along the right channel - using left and then right, right and then left to bamboozle his marker - and whipped a cross in the direction of Sturridge.

Gonen stepped out for a seemingly simple claim but fumbled and Adam Lallana, in much the same manner that brought him a winner at Palace last Saturday, surged at the loose ball. He got there too, but his clip lofted up and over the crossbar.

Rodgers opted for a double alteration shortly after the hour mark. Balotelli was introduced to the frontline for Philippe Coutinho, while Can switched to midfield as Dejan Lovren replaced Joe Allen for the remainder of the match.

The Italian striker was soon warming Gonen's hands with a dead-ball drive that was too straight and, overall, the No.45 provided an added dimension for the Reds upon his entrance, all deft touches and dependable hold-up play.

Lovren rose above the opposition but glanced over from Henderson's inswinger and Sturridge's cross-shot sailed harmlessly out, having been teed up by Raheem Sterling, returning to action as a late substitute at Anfield.

But the deadlock-breaker did come. Ibe was fouled inside the area and Liverpool had a penalty. With Steven Gerrard absent through injury, Balotelli collected the ball and sent it nestling past the 'keeper to secure an advantage in the tie.