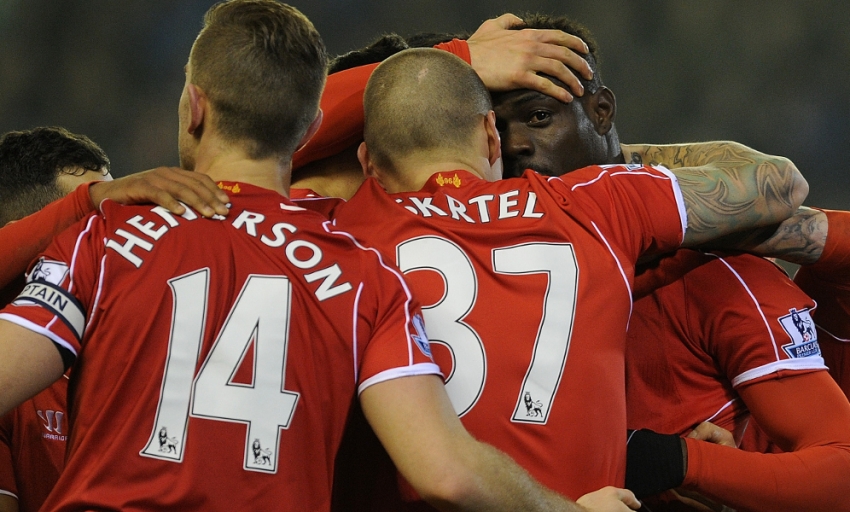 Mario Balotelli came off the bench to net a late winner as Liverpool beat Tottenham Hotspur 3-2 in a pulsating game at Anfield on Tuesday night.

The Italian turned home a cross from fellow substitute Adam Lallana in the final stages of the contest to clinch the three points with his first Barclays Premier League goal for the club.

Lazar Markovic had earlier given the Reds a deserved 15th minute lead, concluding a counter-attack by steering into the bottom corner via the hand of Hugo Lloris.

However, Spurs levelled via Harry Kane midway through the first half when the striker put the finishing touch on a slick move by drill beyond Simon Mignolet from 12 yards.

Daniel Sturridge hit the post before half-time and won an early penalty after the interval that allowed Steven Gerrard to restore Liverpool's lead from the spot; however, Mousa Dembele equalised soon after, bundling Kane's cross over the line from close range.

Nonetheless, with time ticking away, two of Brendan Rodgers' introductions from the bench combined when Lallana's low centre was fired into the roof of the net by Balotelli to secure victory.

The release of pre-match team news confirmed two changes for Liverpool, with Sturridge coming into the starting line-up for the first time since recovering from injury. He was joined by Markovic as the pair replaced Raheem Sterling and Lucas Leiva.

The Reds got the game underway sporting special jerseys adorned with the logo of 'Seeing is Believing' - the official charity of main club sponsor Standard Chartered, which aims to tackle avoidable blindness around the world by providing simple treatments and affordable surgeries to transform the lives of children and adults.

With the club's principal owner, John Henry, and chairman, Tom Werner, watching on from the directors' box, Sturridge had the game's first good opportunity. He pounced on a wayward pass from Ryan Mason and held off the attentions of Jan Vertonghen as he made his way through on goal; however, his effort lacked power and rolled into the grasp of Lloris.

Tottenham's French goalkeeper was then worried once more when a Steven Gerrard free-kick from 20 yards narrowly evaded the top corner.

Next, Lloris was forced to execute a fine one-handed stop to thwart a powerful Sturridge half-volley after Markovic had laid Jordon Ibe's cross off into his path.

However, with 15 minutes played, the visiting custodian was beaten. Mignolet's quickly-taken kick forward was nudged into the path of Markovic by Sturridge and the Serb raced into the area before diverting the ball into the bottom corner of the goal.

Lloris will have been disappointed not have to done better having got a hand to it, but there was no tempering the joy inside Anfield.

It almost got even better, too, with 20 minutes on the scoreboard - Nabil Bentaleb's loose pass was collected by Sturridge, who sped into the area only to see his close-range prod deflected over the bar by Eric Dier.

Liverpool were purring as they went forward, but Tottenham restored parity on 26 minutes. Christian Eriksen and Erik Lamela combined on the edge of the area before the latter's reverse pass picked out Kane, who slammed into the back of the net.

It was proving an absorbing, keenly-fought contest at Anfield; Ibe stung the palms of Lloris with an incisive run and blast before Sturridge's clever back heel crashed against the post in first-half stoppage time.

The high level of the contest remained constant after the interval, and Liverpool were given an early chance to restore their advantage when Danny Rose tripped Sturridge in the area. Typically, Gerrard stepped up and made no mistake to put his team 2-1 in front.

That lead made have been short lived had Mignolet not produced a magnificent flying stop to tip an edge-of-the-box drive from Lamela over the crossbar soon after.

The Belgian also pulled off a fine save to impede an Eriksen free-kick on the hour, but the ball broke kindly for Kane, whose return centre was nudged into the net by Dembele inside the six-yard box. Replays suggested Kane may have been in an offside position when he initially pounced, but the goal stood.

As the game entered into its final quarter, Rodgers opted to introduce Dejan Lovren in place of Gerrard, but the Reds continued to push forward - Moreno's toe-poke from Coutinho's through ball brought a near-post block out of Lloris.

Balotelli then replaced Sturridge and Lallana took the place of Markovic as the hosts went in search of a winner - and it was the two substitutes who combined to provide it on 83 minutes.

Lallana motored into space inside the area after collecting Ibe's pass and delivered perfectly across the six-yard box for Balotelli to side-foot into the net and put the seal on an entertaining night at Anfield.

For more information on the 'Seeing is Believing' initiative and to make a donation now, click here to visit the campaign's official website.