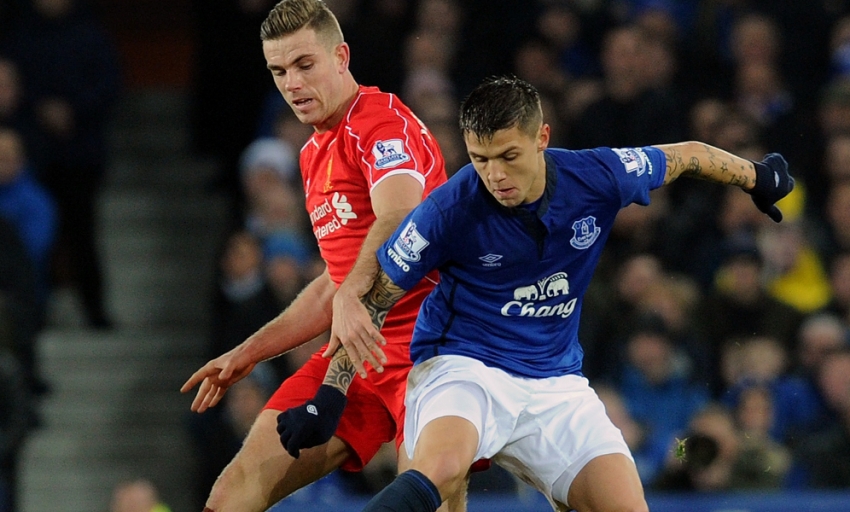 Liverpool had to settle for a share of the spoils despite dominating for large periods and striking the woodwork in a goalless draw with Everton at Goodison Park on Saturday evening.

The second meeting of the old foes in 2014-15 ended in the same ultimate result - a point apiece - though the Reds had the more promising chances and prevented the Blues from a shot on target for 86 minutes.

Before proceedings began, sporting rivalry was put aside as Everton unveiled a poignant plaque at the stadium in memory of the 96 Liverpool supporters who lost their lives at the Hillsborough disaster in April 1989.

The arrival of teamsheets on the other side of Stanley Park revealed a start for 19-year-old Jordon Ibe - one of three changes to the line-up that started Wednesday's dramatic FA Cup replay victory against Bolton Wanderers.

Jordan Henderson and Lucas Leiva were also drafted back into Brendan Rodgers' XI as the Reds kicked off the 224th meeting with their local rivals attempting to clock up a fourth consecutive Barclays Premier League win.

A typically frantic beginning to the game was punctuated by a pair of opportunities for Raheem Sterling, who was thwarted successively by the Everton defence and goalkeeper when he sought to extend his season goal tally into double figures.

The clock was showing 10 minutes when Steven Gerrard - such a regular scourge of the Reds' neighbours - lined up a free-kick to the left. It was a trademark curler and Joel Robles had to be alert to push the effort aimed at the top corner away.

An injury to Lucas forced an early switch for Rodgers at Goodison Park, with Joe Allen the man turned to from the substitutes' bench. The like-for-like alteration did not disrupt the visitors' flow, however. Far from it, in fact.

Alberto Moreno fed Sterling inside the left channel and when the No.31 scampered into space on the edge of the box, his cross-shot drifted towards the supporting Ibe. But a momentary hesitation allowed Robles to rush out and block.

The Everton goalkeeper could have done nothing if a thunderous drive from the same player had travelled an inch to the right on 27 minutes, though. Dribbling past Bryan Oviedo, Ibe thrashed a whistling 20-yard shot that pinged out off a shuddering far post.

Rodgers would have been pleased with his charges' showing, and how they handled the threat of Romelu Lukaku in the opposite direction, yet the score remained goalless when the interval sent both teams back to their dressing rooms.

Kevin Mirallas was on target in this fixture last season and the Belgian attacker fancied his chances with a long-range set-piece in the first action of the second period. An ambitious strike swooped low and wide to the left, however.

In riposte, Philippe Coutinho slid through Sterling and the forward clipped an immediate hit too close to the hands of Robles. Within seconds the duo combined again but the Blues stopper put his body in the way at the near post.

Liverpool were upping the ante considerably and an acrobatic Gerrard overhead from the subsequent corner was only denied by the head of Steven Naismith. On came Daniel Sturridge, replacing Coutinho in attack 10 minutes after the break.

Possession was almost entirely the Reds' by the hour mark and that drew a response from Roberto Martinez and his Blues, including the injection of Aaron Lennon and his searing pace along the right flank.

Patient approach work by Gerrard, Ibe and Sturridge created a half-chance for the latter when a loose ball scrambled around the box. The Englishman fired on the turn and found Phil Jagielka a stubborn obstacle to block the strike from close range.

Henderson's diligence in defensive covering crucially prevented Lukaku from troubling Simon Mignolet as the powerful Everton striker drove beyond the challenge of Emre Can and on a direct path to the Liverpool goal from the left.

Robles scooped up a snapshot by substitute Rickie Lambert, courtesy of Gerrard's clever flick, Mignolet sprung to the right to claw out a swiped finish from Seamus Coleman and the Liverpool skipper curled a left-footer wide - but nobody could summon a winner.