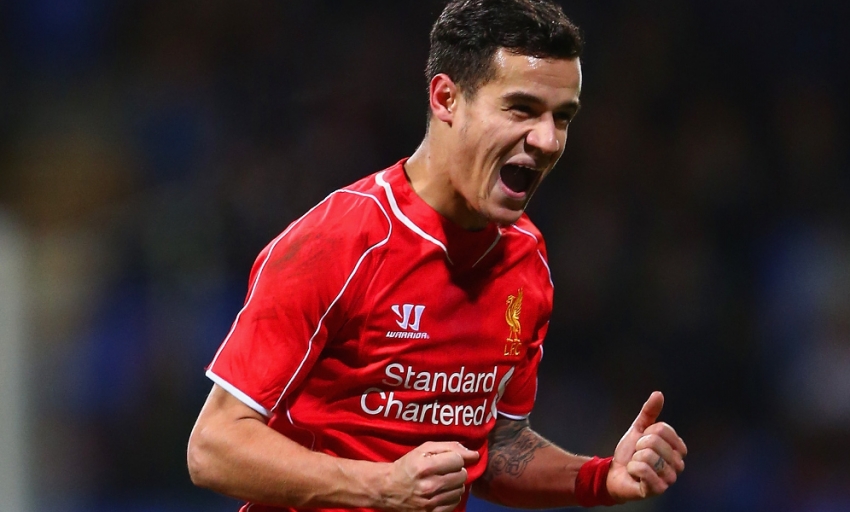 Philippe Coutinho's stunning, stoppage-time curler sent Liverpool into the fifth round of the FA Cup on Wednesday night with a 2-1 comeback victory over Bolton Wanderers.

A goal was finally scored in the tie after 58 minutes of the replay, when Eidur Gudjohnsen beat Simon Mignolet with a penalty, awarded against Martin Skrtel for a tackle on Zach Clough inside the travellers' box.

Neil Danns' dismissal for the home side helped the Reds take dominance and their efforts were rewarded with five minutes remaining when Raheem Sterling forced home a crucial equaliser in front of the gathered Kopites.

It was at the same end as added time began and extra-time loomed that the Brazilian No.10 scooped up the ball and smashed a sensational, looping finish beyond the goalkeeper and home to set up a meeting in the next stage with Crystal Palace.

The anticipation ahead of Liverpool's starting XI being confirmed was stoked by a potential 700th Reds appearance for Steven Gerrard, and the stunning personal achievement was confirmed an hour before kick-off at the Macron Stadium

'Welcome to the club' tweeted Jamie Carragher upon hearing the news that his former teammate had graduated to an elite bracket of men that had previously included only the ex-defender himself and the esteemed Ian Callaghan.

Joe Allen was the other man brought into the line-up by Brendan Rodgers, with Jordan Henderson and Lucas Leiva making way from the side that began Saturday's victory over West Ham United. Daniel Sturridge maintained a spot on the bench.

The opening opportunity of the encounter arrived to the No.8 too. A flowing move from the visitors created space at the edge of Bolton territory and allowed a switch to the right flank, from where the skipper side-footed too close to Andrew Lonergan.

Coutinho, fresh from penning a new, long-term contract at Anfield, next swiped wide to the left, and the home goalkeeper collected a low Sterling drive at the conclusion of a pass-touch-pass-touch approach at great pace.

David Wheater flicked a header into the grateful hands of Mignolet once he had risen highest to meet an inswinging free-kick, and when he later tried to nod down to Gudjohnsen, Liverpool's stopper was alert to collect.

Into the 31st minute and the best chance of the contest. Gerrard drove a raking ball into the run of Alberto Moreno, creeping forward, and possession was rapidly moved to Adam Lallana and then Sterling inside the area.

Faced with bodies between his position and the goal, the 20-year-old paused, waited for enough room and picked his spot in the region of the top corner - unfortunately, the attempt curled onto the outside of the post.

Matt Mills, the Championship outfit's skipper, volleyed an ambitious but on-target blast at Mignolet as the half-time interval approached, and Coutinho whipped one too far to the right, but a third consecutive period in the cup tie ultimately ended without an addition to the scoresheet.

A combination between Coutinho and Sterling set Liverpool on their way at the weekend, and the duo nearly broke the deadlock after the break. But the latter's eventual effort from the left flank was pawed away by the diving Lonergan.

Henderson's energy and endeavour was called for by the manager in the middle of the park, with Gerrard pushed into a more attacking region, but the size of the task suddenly increased shortly before the hour mark.

Neil Lennon's charges countered quickly and as Clough sped inside and into the Reds' area, Skrtel was penalised for his challenge. The experienced Gudjohnsen assumed responsibility and successfully placed the spot-kick home.

Momentum was now behind the buoyant hosts, though their joy was dimmed to a degree by the dismissal of tenacious midfielder Danns, shown a second yellow card and subsequent red by referee Roger East.

Yet, Clough was the catalyst of another troublesome foray toward goal and having held off the exertions of Emre Can to cover, the youngster had Mignolet worried with a thrash in the direction of the near post that carried wide.

Rodgers decided it was time for Sturridge, taking to the field against a team he represented on loan in 2011. It was all Liverpool and the post was clattered again by a deflected Henderson drive that seemed destined for the net.

The Reds were lining up to try to score as the clock ticked into an 80th minute and perhaps got in each other's way, though it did fall to Sterling and his hit from close range was expertly blocked by the diligent Dorian Dervite.

Can walloped another strike onto the crossbar in the latest wave of attack and just as it looked like the campaign was futile, the German clipped a sublime cross-field delivery onto the boot of Sterling to direct past Lonergan.

We seemed set for extra-time, but Coutinho had other ideas. Bolton could not have expected what he produced, lashing an unstoppable hit into the top corner from 20 yards, delighting the fans and teeing up a fifth round tie at Palace.