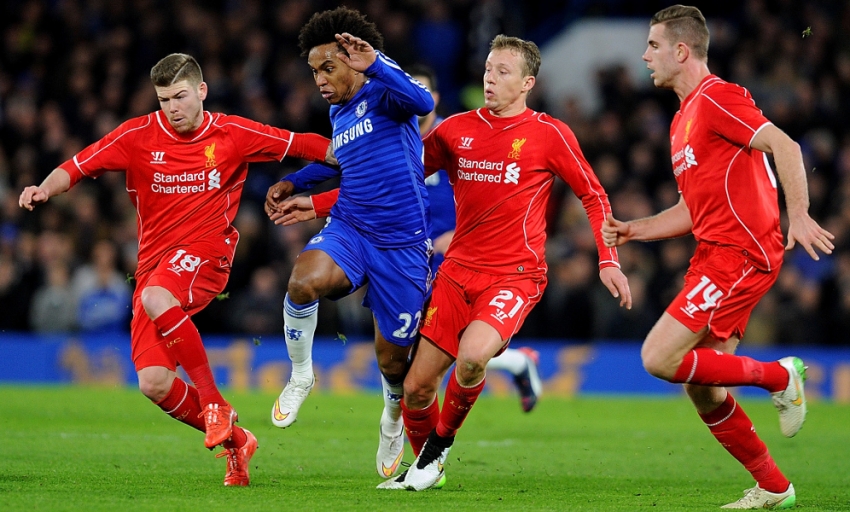 Liverpool's Capital One Cup ambitions were quashed on Tuesday night as a 1-0 victory for Chelsea at Stamford Bridge saw the Londoners prevail in the semi-final with a 2-1 aggregate result.

Another absorbing clash between the Barclays Premier League foes captured the attention for 90 minutes, but neither could muster a strike - meaning extra-time was required, with the away goals rule then in operation.

Branislav Ivanovic altered the course of the tie when he steered a header into the net four minutes into the additional period, moving onto a set-piece delivery by Willian and giving Simon Mignolet little chance.

And despite the Reds' exertions in the time that remained, Chelsea held firm to deny the determined visitors a first return to Wembley since three trips to the national stadium in 2012.

Pre-match team news arrived 75 minutes before proceedings got underway and confirmed that Brendan Rodgers had selected exactly the same starting XI that began the first leg against the Blues at Anfield seven days ago.

The aggregate score was 1-1 when the second meeting kicked off and both sides were clearly keen to increase their tally, with Raheem Sterling and Diego Costa each seeking to utilise their acceleration to move free in behind.

For all that the opening quarter-hour was brimming with the trademark facets of a rivalry that has developed in the past decade, though, neither team could produce the final incisive delivery or finish to conclude their approach.

Sterling rolled Kurt Zouma on the halfway line to collect a Jordan Henderson pass. Liverpool's central forward drove toward the box, with Steven Gerrard storming up in support, but before a decision was made, the Chelsea man recovered.

Meanwhile, Costa demanded a penalty for a challenge by Martin Skrtel but was denied, then Thibaut Courtois' rapidly outstretched palm pushed out a blistering hit from Alberto Moreno - teed up by a stunning cross-field Gerrard ball.

Nemanja Matic scuffed an effort well wide as the contest became steadily more end-to-end, a scenario that allowed Philippe Coutinho to glide through the middle of the home backline - a la Sterling last week - only for Courtois to block with a leg.

The Reds were counter-attacking with great intent, searching out a teammate over the top at the earliest opportunity, and the latest flowing move brought Henderson into a shooting position 20 yards out. But the vice-captain skewed off target.

In response, Brazilian playmaker Oscar clipped a set-piece - following a foul by compatriot Lucas Leiva - and then an attempt from open play too far to the left twice in quick succession to leave it goalless at the interval.

The tension and mini-battles within the tie continued into the second period, which was 10 minutes old when injury forced centre-back Mamadou Sakho to leave the field. On came Glen Johnson to tackle his former employers.

Eden Hazard's nimble footwork had Red hearts in mouths when he set off on a dribble from the right flank to the centre, stepping in and out of defenders and rifling a shot that whistled wide to the right of Mignolet's goal.

The Belgian then made a crucial save to thwart Costa, who blasted low from outside the area and benefited from a troublesome Skrtel deflection. At the other end, the Liverpool captain curled too close to Courtois.

By now, the tempo was frenetic. And Mignolet was the man to thank again as a Henderson interception bobbled into the path of Costa yards out - the Spain international was poised to convert until the No.22 rushed out and stole possession.

Into the 70th minute, it was time for Mario Balotelli, introduced with the score still deadlocked on the evening and therefore the potential for extra-time looming larger on the horizon to finally decide the first Capital One Cup finalists.

Gerrard volleyed over the crossbar after a combination between Balotelli and Coutinho got the ball to the No.8, while Mignolet calmly handled an ambitious hit from at least 40 yards unleashed by Hazard, often Chelsea's chief creator.

The referee's full-time whistle heralded an extra half-hour, with Liverpool under obligation to find the target if they were to book a berth at Wembley. But it was actually the hosts who struck, four minutes in.

Lucas was penalised on the right side and Willian stood over the free-kick. His swinging cross into the box was an invitation for a colleague to connect, and Ivanovic accepted by rushing in and nodding beyond Mignolet.

Rodgers' charges simply had to score; Henderson, and the travelling Kop housed at the opposite end, thought perhaps he had with a glancing header set up by Sterling on the left. However, it drifted away to the right and Courtois was unconcerned.

Substitute Ramires thrashed wide as Jose Mourinho's team tried to establish a cushion that ultimately was not needed, with the Reds unable to find the leveller which would have called for penalties in London.