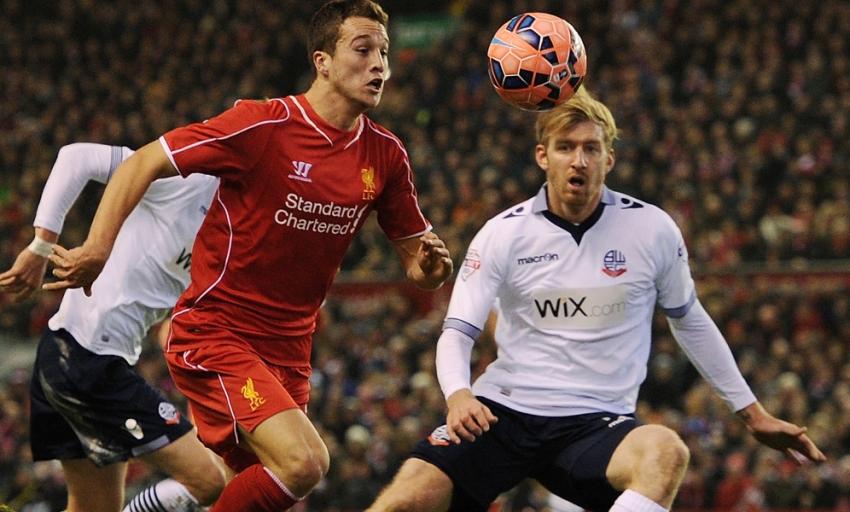 Liverpool were held to a goalless draw by Bolton Wanderers in their FA Cup fourth-round tie at Anfield on Saturday evening.

The Reds will have to contest a replay with the Championship side after they were thwarted by a string of fine saves from Adam Bogdan in the visiting goal.

Raheem Sterling, Philippe Coutinho and Fabio Borini all had efforts repelled by the Trotters' No.1 in the second half, while Javier Manquillo spurned a good chance from a rebound inside the box.

It means the teams will have to do battle once more at the Macron Stadium in just over a week's time to determine who will take a place in round five of the competition.

Having confirmed intentions to make a handful of changes to his line-up, Brendan Rodgers drafted in a total of five fresh faces into the starting XI for the early evening kick off.

Meanwhile, the opposition team sheet confirmed a return to L4 for Emile Heskey, while another former Liverpool player was named on the bench in Jay Spearing.

The Reds got the game underway at Anfield determined not to join the likes of Chelsea and Manchester City on the receiving end of an upset on what was proving to be an incredible weekend of FA Cup shocks.

However, Bolton started brightly under the floodlights - a game of pinball inside the home side's box was cause for momentary early concern.

A raking long-range half-volley from captain-for-the-day Jordan Henderson then brought a smart top out of Bogdan on 12 minutes as Liverpool looked to assert a degree of authority on the contest.

Next, Coutinho stung the palms of the visiting custodian with a blast from outside the box, but the Trotters had acquitted themselves well in the opening stanza.

On the half hour, the Reds' No.10 released Sterling into space down the left. The 20-year-old sped into the box beyond two defenders before seeing his eventual effort blocked by Matt Mills.

At the other end, a sizzling first-time strike by Dean Moxey from Emre Can's headed clearance whistled narrowly wide of the upright.

Play quickly flowed back into the Bolton area and a driven centre from Jose Enrique created panic before Glen Johnson looped an effort into the arms of Bogdan.

The visitors had proved a resolute obstacle to penetrate in the initial 45, and Rodgers elected to make a change during the interval with Lazar Markovic entering the action in place of Enrique.

On 54 minutes, the hosts fashioned their best opportunity of the contest so far. A sublime outside-of-the-foot through ball by Coutinho dissected the Bolton defence and rolled invitingly into the path of Sterling. Competing with Bogdan to reach the ball first, the forward won the foot race but watched his prod cannon against the onrushing goalkeeper and bounce away from goal.

Soon after, a well-worked move involving Markovic, Lallana and Sterling opened up a chance for Coutinho on the edge of the box. His drive was finely thwarted by Bogdan, before Manquillo lashed the rebound wide of the far post from close range.

Liverpool hearts were in mouths, though, as Eidur Gudjohnsen side-footed well wide from a low Moxey delivery just after the hour when the former Chelsea and Barcelona man should have perhaps done better.

The 36-year-old spurned an arguably even better opportunity moments later when he hooked a left-foot volley over the crossbar completely unmarked from 12 yards.

With the game entering its final stages, Liverpool made a double change as Lucas Leiva and Borini replaced Allen and Manquillo.

Moments after his introduction, Borini was left clutching his head in his hands after his seemingly goal-bound strike from Coutinho's pass was clawed away by the fingertips of Bogdan.

Liverpool continued to press until the final whistle, with Borini going closest when he headed a Henderson cross inches wide, but Bolton were able to hold on and set up a replay on home soil.