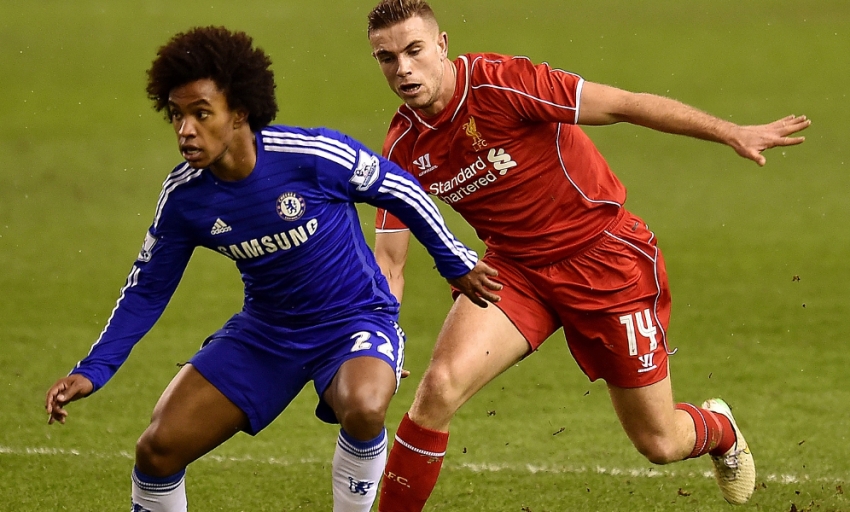 Liverpool's Capital One Cup semi-final with Chelsea is finely balanced for the second leg after their pulsating first meeting on Tuesday evening ended in a 1-1 draw at Anfield.

The Barclays Premier League foes are doing battle for a place in the showpiece at Wembley and it will now all be decided in the return, as they traded a blow apiece here.

Eden Hazard dented the Reds' encouraging, energetic start by winning and converting a penalty in front of the Kop to claim a lead that Jose Mourinho's outfit protected throughout the first half.

But they could not hold it for long after the interval, with Raheem Sterling turning on his turbo engine to zoom through their backline and swipe an equaliser into the bottom corner.

When team news was confirmed an hour-and-a-quarter before kick-off, the captain's name stood out. Steven Gerrard returned to the line-up after missing the weekend win against Aston Villa.

Freezing temperatures on Merseyside gave way to a sprinkling of light snow by the beginning of the contest, the latest chapter of a very modern rivalry between the Reds and their visitors from London.

In previewing the occasion, Brendan Rodgers spoke of the aim to secure the kind of result tonight that would provide his team with a platform in the second leg at Stamford Bridge next Tuesday.

The message had clearly been instilled. A bright opening saw Mamadou Sakho release Alberto Moreno into the Chelsea area with an incisive pass, though the Spaniard was thwarted by Gary Cahill's reactions.

Gerrard took a more direct approach in thundering one from 35 yards that Thibaut Courtois had to backpedal quickly to tip over. However, it was the away side breaking the deadlock on 18 minutes.

Cesc Fabregas led a charge forward and the ball spilled to Hazard in the box. Emre Can attempted to retrieve possession but was penalised, presenting the Belgian with a chance to stroke a penalty past compatriot Simon Mignolet.

Undeterred, Liverpool continued on the front foot and Martin Skrtel rued nodding a header wide when a whipped corner by Philippe Coutinho found him waiting at the back post.

In the league meeting of November, Can struck early with a deflected hit. Here, Coutinho's effort in the closing moments of the half bounced up off John Obi Mikel but sailed too high to trouble Courtois.

The Reds were then adamant a spot-kick of their own should have been awarded against Diego Costa, but referee Martin Atkinson was unmoved - 1-0 to the Blues at the break.

There was therefore work to do for the hosts in the second period and only some last-ditch defensive blocking by Cahill and John Terry prevented Sterling from capitalising on Coutinho's creative approach.

A minute before the hour mark, though, the No.31 was the definition of clinical. Spinning on a Jordan Henderson pass, he powered through two opponents centrally, drove slightly to the side and planted a left-footer across Courtois to level.

It was a sublime goal, befitting the magnitude of a tie that was hugely absorbing. Skrtel's concentration ensured the leg remained balanced as the Slovakian stopped Chelsea's chief architects, Fabregas and Hazard, from teeing up the latter inside the area.

True to his performances of recent weeks, Coutinho was everywhere. It was his dribble and set-up for the skipper to send a shot onto the left post, while the Brazilian's low piledriver soon worked Courtois.

With momentum pushing them forward, Liverpool searched for an advantage in the affair and a precise Henderson free-kick delivery from wide deserved more than harmlessly clipping the back of Skrtel.

The robust Chelsea goalkeeper produced a double save to scupper the Reds' vice-captain and then Sterling, and the Belgian custodian was at it again to claw out an Adam Lallana blast.

And despite mounting pressure from the home team, there were no further additions to the scoresheet - meaning the Stamford Bridge game next Tuesday will settle who progresses to the final.