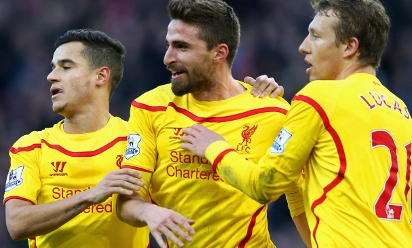 Four Reds who caught the eye against Villa

Brendan Rodgers hailed the persistent nature of Fabio Borini after the Italian struck his first goal of the season to set Liverpool on the way to victory at Aston Villa on Saturday.

The Reds broke the deadlock midway through the first half in the Barclays Premier League clash as Jordan Henderson supplied a pinpoint cross into the middle and Borini threw himself into the air to connect and divert the ball beyond Brad Guzan.

It was the No.29's second league goal for the club, his third overall, and the strike punctuated a first half in which the visitors were the dominant force and perhaps should have scored more to claim a greater advantage in the tie.

After the interval, Villa turned the screw with a prolonged spell of pressure, in which a handful of good opportunities were spurned and Simon Mignolet was called into action, particularly to thwart the menace of Christian Benteke.

Borini was then withdrawn on 71 minutes, with Rickie Lambert coming on in his place to net the second goal and ensure it was another successful outing for Rodgers' side, who are now unbeaten in eight matches in all competitions.

Asked about the influence of frontmen Borini and Lambert during his post-match interview in the Villa Park tunnel, the manager said: "I'm delighted. I think Fabio is a great example of persistence.

"Whether Rickie starts a game or comes off the bench, we know that he can score goals. They were two different types of finishes, but two great finishes. I'm delighted with both of them."

The victory moved Liverpool momentarily into sixth position in the league standings; however, a late win for Tottenham Hotspur on Saturday, followed by West Ham United's triumph on Sunday, means the Reds currently occupy eighth place.

But they have not lost any of the eight games since enduring defeat at Manchester United in mid-December, on a day when Rodgers' approach altered dramatically and has since brought about an upturn in fortunes.

"Everyone has worked as a team," said the Northern Irishman. "We were nowhere near the identity of what this team has been about for two years.

"It was a very good win for us against Villa. I thought we started the first half very well. We had good control and we created chances and we were disappointed to only be 1-0 up at half-time.

"We had to weather a little bit of a storm at the start of the second half. During the first 15 minutes, they were playing the longer balls - the more direct balls up into the box. But I thought that defensively we were outstanding."

But for some sharp goalkeeping from Mignolet, especially when Benteke bore down on his goal and the Liverpool man was able to block bravely, the game might have taken on an entirely different complexion.

"A special mention to Simon Mignolet because he didn't have a great deal to do, but I thought he was really dominant, in particular from corners and with balls coming into the box," said Rodgers.

"Benteke, if you watch and analyse his games, he has a lot of aerial duels that he wins against many teams and he didn't have so many. Simon came and took crosses, got contact on it and I thought he was very commanding."