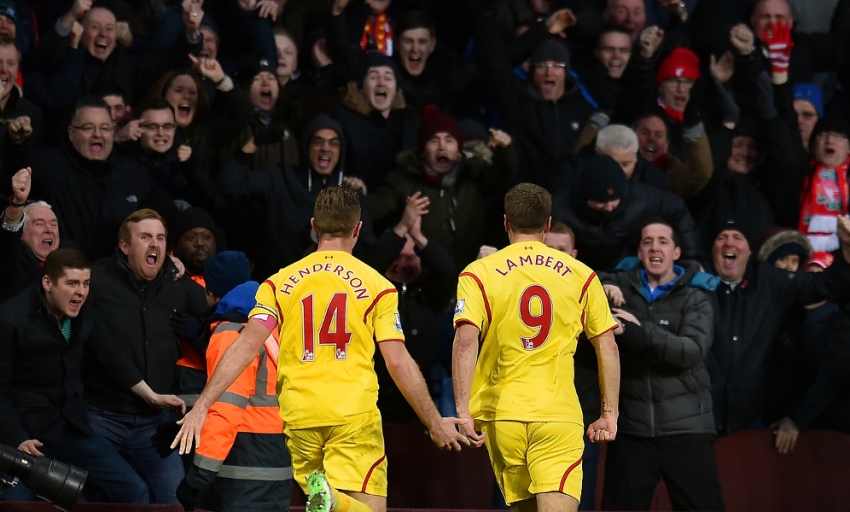 The manner in which Rickie Lambert and Liverpool's players ran to the travelling fans in celebration at Villa Park on Saturday demonstrated the team's sheer desire to win, according to Jordan Henderson.

With the Reds searching for a second goal to put the game beyond Aston Villa, Lambert scooped Raheem Sterling's pass and dragged a low effort into the corner of Brad Guzan's goal to make it 2-0 to the visitors.

The strike prompted frantic scenes in the Liverpool end and sent Lambert and co hurtling across the turf towards the joyous Kopite contingent packed into the Doug Ellis Stand.

Henderson believes the sheer emotion of the moment said everything about the goalscorer's passion for the club and his commitment to the cause, and that it highlighted the dedication of the team as a whole.

"It was a fantastic finish," said the vice-captain when questioned about the quality of his teammate's low drive. "Rickie has got great finishing ability and he came on and worked really hard for us, holding the ball up and showing his quality with the goal.

"You can see how much it means to Rickie [from his celebration]. But as a team it meant a lot to get the three points. It was very, very pleasing.

"First half, I thought we controlled the game well and had quite a few chances to go 2-0 up. We knew that in the second half they would come out and make it very difficult, putting the ball into the box early, but I thought we dealt with it really well.

"I thought the back three - as well as the goalkeeper - were fantastic, dealing with the long balls and the set pieces. As a team, we were very solid. Thankfully we got the second goal with a great finish from Rick."

Liverpool took the lead at Villa Park through Fabio Borini, who prospered from a pinpoint cross served up by Henderson - the 24-year-old's seventh assist of the season.

"I think Lazar [Markovic] and Philippe [Coutinho] produced some good play in the corner and I just made a forward run and it was a great ball from Lazar," reflected the midfielder. "Then I've just put it in an area and Fabio got a great contact to it and a great finish.

"It was a good goal, but then I thought that throughout the first half, we kept dominating and really wanted the second goal, but it didn't quite come. We kept going, kept digging in and we got it in the end."

Liverpool could reflect on an impressive result and performance overall; however, the way Villa fought back in the second half had Kopites on the edge of their seats and forced the Reds to work overtime in keeping the home side out.

"It was a difficult period, but we knew that would happen," said Henderson. "They are a good team, Villa. I thought Simon Mignolet was outstanding for the whole game, dealing with crosses coming into the box, he was very dominant.

"Simon is a great lad and a great professional, who works really hard. I think he's dealt with everything fantastically well. That was the same last week. He put in a great performance and he did that again today, which was not only great for the team, but also for him personally."