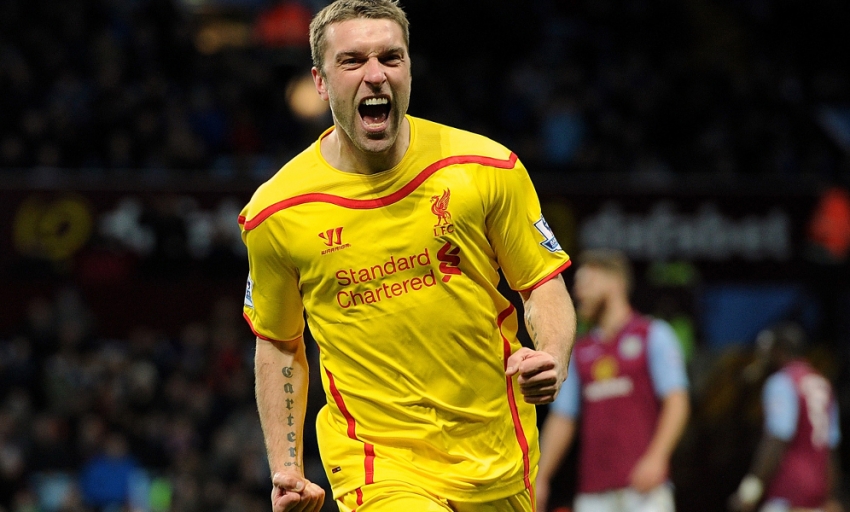 Fabio Borini and Rickie Lambert were on target as Liverpool extended their unbeaten run to eight matches with a 2-0 victory over Aston Villa at Villa Park on Saturday.

The Reds took the lead thanks to Borini's first goal of the season when the striker turned home Jordan Henderson's pinpoint delivery from the edge of the six-yard box on 24 minutes.

Borini struck the post in the opening exchanges of the second half, but Liverpool were required to weather a heavy spell of Villa pressure as the hosts pressed for an equaliser.

However, Brendan Rodgers' side made sure of all three points when Lambert - just on as a substitute - rifled home with 10 minutes remaining to secure the win.

The release of the teamsheet from the away dressing room confirmed one change for Liverpool, with Raheem Sterling - back from a short mid-season break - replacing the injured Steven Gerrard in the line-up.

On the bench, Adam Lallana was named among the substitutes following injury, as was Jordon Ibe - back at Anfield after being recalled from his loan at Derby County.

With confidence in the ascendency on the back of a seven-match unbeaten run in all competitions, the Reds began assertively in the Midlands - Philippe Coutinho drove a back-post volley wide from a corner inside the opening two minutes as they attempted to make a statement of early intent.

With 15 minutes on the clock, the visitors attempted to prise open their opponents once more, and only a last-ditch challenge from Alan Hutton denied Sterling from tucking away the return pass in a one-two with Borini.

Next, Alberto Moreno had the ball in the back of the net courtesy of a crisp drive, but the sight of a late raised flag for a marginal offside cut short the Spaniard's premature celebrations.

Liverpool did break the deadlock with 24 minutes played. A wonderful hooked centre from the right corner of the box from Henderson picked out Borini at the back post, and the Italian stretched to prod the ball beyond Brad Guzan from close range.

The Reds' probing didn't let up, either. Coutinho's header from a Lazar Markovic cross was glanced straight into the grasp of Guzan after another flowing move; though, at the other end, Mamadou Sakho was required to produce a fine tackle to deny Christian Benteke a clear strike on goal.

Back came Rodgers' men and Sterling spurned a glorious chance to extend their advantage when he beat Nathan Baker to a bouncing ball and found himself bearing down on goal. The 20-year-old elected to try and loft the ball over Guzan, but the American goalkeeper stood tall and was able to collect.

It almost proved costly as Ashley Westwood's first-time pass released Tom Cleverley into a dangerous area inside the left channel of the area. Thankfully, he scooped over under pressure from Markovic to ensure Liverpool's lead remained intact heading into the break.

The start of the second half yielded two opportunities for the Reds in quick succession as Borini turned Martin Skrtel's knockdown from a corner onto the base of the post prior to Henderson's blast being pushed to safety by the dive of Guzan.

Liverpool survived a scare on the hour when Hutton's cross-field ball found its way to Benteke in the box. The striker set himself before driving at goal; however, it was met by a strong two-hand block from Simon Mignolet.

With the contest now much more open, the home fans beginning to find their voice, Villa centre-back Baker sent a towering header off target from a corner. Then Skrtel was required to execute an expert block to thwart a shot from Benteke.

The pressure was mounting and Baker again threatened when Benteke's knockdown fell for him invitingly inside the box, but he struck fresh air.

Liverpool's response to the growing number of questions being asked of their backline was a double change, with Lambert and Jose Enrique replacing Borini and Moreno for the final 20 minutes.

It had the desired impact as Lambert made it 2-0 to the Reds when he collected Sterling's pass from a half-cleared corner and drove into the bottom corner from the edge of the box to wrap up a good afternoon's work in the Midlands and move to four points off fourth position in the Barclays Premier League.