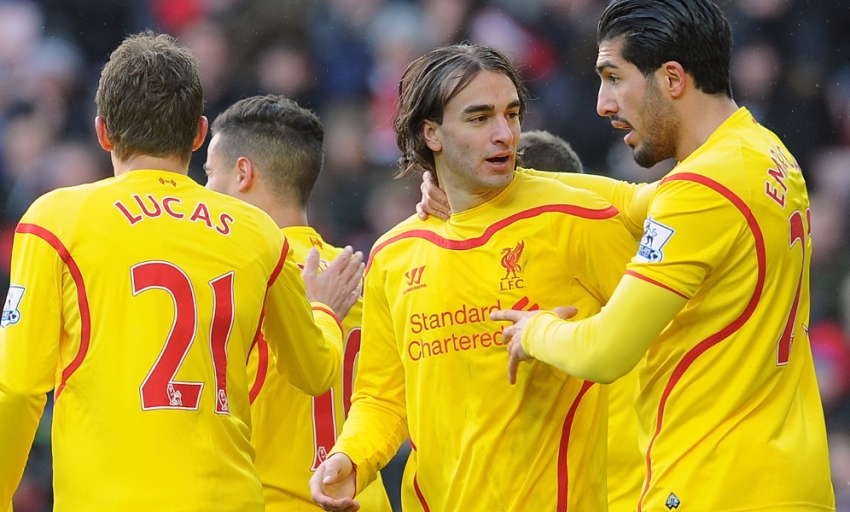 Lazar Markovic's second goal for Liverpool was enough to secure a deserved 1-0 victory over 10-man Sunderland in the Barclays Premier League on Saturday afternoon.

Capitalising on hesitation in the opposition ranks with nine minutes on the clock, the wide-man took command and calmly prodded into the back of the net for what proved to be the winner at the Stadium of Light.

Gus Poyet's outfit were further hindered by the dismissal of Liam Bridcutt early in the second half, while the woodwork was wobbled three times in total, as the Reds claimed three points for the ninth time in this campaign.

The headline of Liverpool's team news, confirmed an hour before the game got underway in the north east, was the inclusion of Fabio Borini from the start against a side that he represented with distinction on loan throughout the 2013-14 season.

An assured beginning to the encounter featured plenty of possession for the travellers - Philippe Coutinho chief among those keen to find a path through the Black Cats' backline - and within three minutes there were strong claims for a penalty.

Collecting the ball just inside the opposition half and using an agile spin to move into space, the No.10 threaded a defence-splitting pass towards Markovic that reached its target. The winger sped into the box and tumbled, but the referee dismissed appeals.

There was nothing to stop the Serbian on nine minutes, though. Emre Can started the approach by spreading play wide to him and the No.50 soon fed Steven Gerrard, who found a way with the help of Borini to reciprocate - Markovic reacted quickest and toe-poked low into the net for 1-0.

Brendan Rodgers' charges were almost exclusively dominant in the first half, happy to distribute control to teammates from any angle, always with several options available to ensure the Reds could attack with intent.

Gerrard had a shot from the edge of the area deflected past the right post - Coutinho the assister - and the captain troubled Sunderland goalkeeper Costel Pantilimon with a dipping free-kick that was ultimately safely pushed over.

However, he was helpless, but for good fortune, when Wes Brown could not fully clear a centre and Markovic ran onto the ball and athletically contorted his body to strike a technically-exquisite volley against the crossbar, off the stopper and out.

The Reds hit the woodwork again on 37 minutes as the unstoppable Coutinho lofted an inviting tee-up into the burst forward of Jordan Henderson, who brought it down and clipped an immediate left-footer that glanced the far post.

Borini squandered a glorious opportunity to double the advantage when Can whipped a pinpoint set-up around the left flank of the home defence, but the Italian fired wide after rounding the 'keeper to leave the score the same at the break.

A tactical reshuffle saw Gerrard replaced by Dejan Lovren for the second period, with Can switched to midfield; subsequently, a powerful drive along the right side by the German was stopped by the already-booked Bridcutt and the midfielder received a red card.

Liverpool were reminded that there was work remaining to do by a thunderous Adam Johnson blast in response that changed course in the air and cannoned off the bar. Martin Skrtel thwarted Patrick van Aanholt in the race for the rebound.

More magical footwork from Coutinho presented Borini with a shooting chance that was blocked, before the Brazilian himself drilled wide to the left following a counter-attack launched by Mamadou Sakho, and Mario Balotelli took to the field.

Pantilimon had to palm away a strike by the Reds' No.45 when he circumnavigated his marker and curled in the direction of the opposite corner from a narrow angle, and the custodian next dived low to handle a Coutinho side-footer.

Positioning himself predominantly on the right, Can was a regular outlet for the visitors and his dinked cross was aimed accurately for the supporting Alberto Moreno only for Santiago Vergini to cover at the correct time and get a leg in the way.

But the scoreline was not altered again by either side at the Stadium of Light and the full-time whistle confirmed a satisfying second away win of the week for Rodgers and his players.