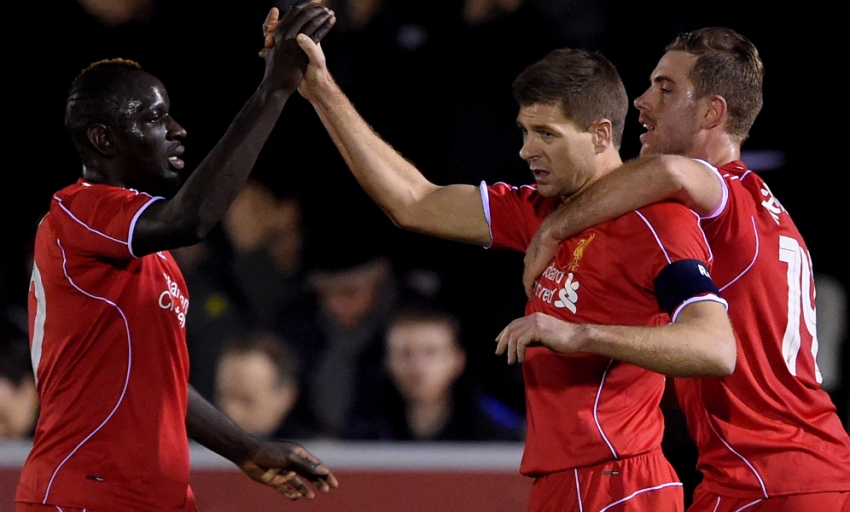 Steven Gerrard scored twice as Liverpool saw off a spirited AFC Wimbledon in the third round of the FA Cup with a 2-1 victory at Kingsmeadow on Monday evening.

The No.8 headed the Reds into an early lead to dampen home fans' spirits, marking his first appearance since announcing he'll leave the club in the summer in typical fashion by turning in Javier Manquillo's centre.

But, after a sustained spell of pressure, the League Two side levelled the tie up when Adebayo Akinfenwa scrambled the ball over the line after it had struck the crossbar at a corner with 36 minutes played.

Wimbledon continued to press after the break, but Gerrard was again on target just after the hour mark, clipping a magnificent free-kick into the top corner from 20 yards to restore Liverpool's lead.

It proved the decisive moment in an absorbing encounter and ensured the Reds successfully navigated their way into the next round of the tournament.

Meanwhile, Gerrard made his first appearance for the club since announcing his decision to leave Anfield at the conclusion of the 2014-15 campaign as Brendan Rodgers elected to field a strong XI.

Also prior to kick-off, it was revealed the winners of the tie would face a home clash against Bolton Wanderers later this month.

With just under 5,000 crammed into the stadium on Kingston upon Thames, there was a genuine sense of FA Cup fever in the air - and the home fans baying for an upset were almost handed an early reason for further cheer when Sean Rigg escaped into space inside the area and drove wide of Simon Mignolet's far post.

But those Wimbledon hopes were quelled on 12 minutes when Liverpool took the lead - and typically, there was a feeling of inevitability about the scorer.

Gerrard swept play out to the right, where Manquillo collected possession in space. The Spaniard set himself before whipping the ball back into the centre, where the captain pounced with a brave stooping header past James Shea.

Markovic could have increased Liverpool's advantage even further when a slick one-two with Philippe Coutinho cut open the Dons' defence, but the winger blazed high across goal from an acute angle.

But a spell of attacking momentum at the other end provided encouragement for the hosts, and a goalmouth scramble at a corner resulted in the ball breaking for Rigg. The winger took a touch before firing a half-volley at goal, which was acrobatically tipped over the crossbar by Mignolet.

They fashioned an even better opportunity to restore parity when Skrtel and Manquillo failed to deal with a long bouncing ball into the box. It fell for Matt Tubbs, who swivelled and hooked narrowly off target.

Their spirited response to falling behind finally paid dividends nine minutes before the break when they drew level via Akinfenwa.

A corner into the box caused havoc in the visiting defence, with the ball evading Mignolet and eventually looping off Mamadou Sakho and onto the bar, allowing Wimbledon's No.10 to turn it over the line on the slide.

It was another flag kick that created more problems for Liverpool in the immediate aftermath of the restart, but thankfully Gerrard was on hand to head Adam Barrett's effort off the line.

Rigg then beat Emre Can to possession and drove over the crossbar, spurning an opportunity to test Mignolet when in space. At the other end, Coutinho jinked his way into space into the left channel of the area and flashed wide.

With an hour played, the League Two club were sensing the possibility of an upset - but more brilliance from Gerrard put Liverpool back in front.

A foul on Coutinho on the edge of the area presented the skipper with a chance to shoot at goal from a free-kick, and he took full advantage as he dispatched the ball into the top corner.

Dannie Bulman did waste an opportunity to serve up a near-instant riposte when he lashed wide from a knockdown, but the goal put the Reds into the ascendancy once more, and only a fine sprawling stop from Shea prevented Lambert from furthering their lead.

Gerrard then again threatened with a long-range free-kick, while a fine stop from Shea foiled Coutinho in the latter stages and the captain saw the chance of a hat-trick denied by the Dons custodian in stoppage time.

Nonetheless, Gerrard's two goals ultimately were enough for Liverpool to begin making their fourth-round plans, with Bolton the opposition in late January.