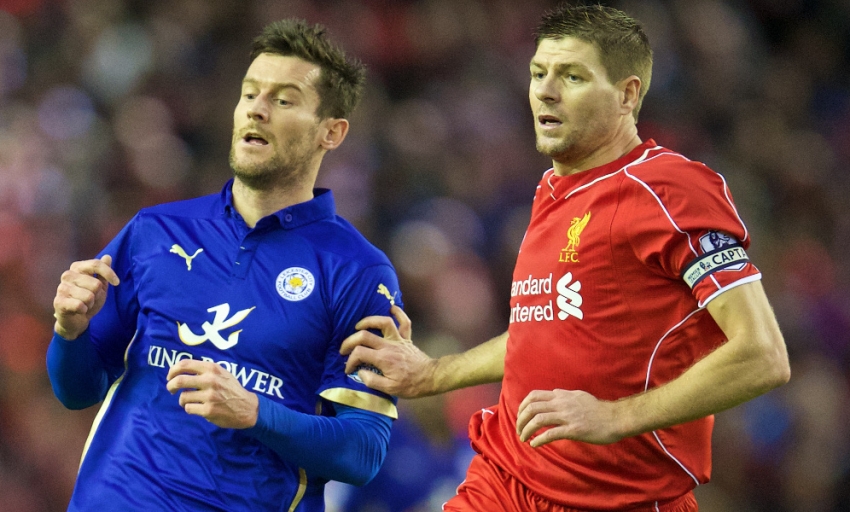 Liverpool's festive winning streak was halted by Leicester City at Anfield on Thursday afternoon as the Reds surrendered a two-goal advantage in a 2-2 Barclays Premier League draw.

An evenly-contested first half had its dynamic altered when the hosts were awarded a penalty for handball - much disputed by the Foxes - that was coolly placed beyond the goalkeeper by Steven Gerrard, his 45th successful conversion for the club.

That tally increased by one more as Philippe Coutinho forced another spot-kick shortly before the break. The No.8 took command again and switched it up to shoot in the opposite direction, expertly notching his and the team's second.

All seemed to be progressing smoothly with the hour mark approaching, until an acrobatic volley by David Nugent and well-placed daisy-cutter from Jeffrey Schlupp dramatically restored parity and shocked the stadium.

Gerrard was one of two players brought into the starting line-up by Brendan Rodgers, with the captain replacing Javier Manquillo in the 3-4-3 formation. Kolo Toure was also drafted into defence to fill in for the suspended Martin Skrtel.

Barely a minute had elapsed before Leicester struck the woodwork. Alberto Moreno was adjudged to have fouled Riyad Mahrez and the visiting attacker stepped up himself to whip an accurate, low free-kick toward the near post that bounced off the goalframe.

By way of retaliation, Raheem Sterling soon had the ball in the net from close range but the linesman's flag had long been raised against Jordan Henderson, who snuck inside the right channel to collect a clipped delivery by Coutinho.

Nigel Pearson's team settled into the contest quickly and next Mahrez was the danger man again. Schlupp rolled around Emre Can, drove along the left and crossed into the area, where the Foxes' No.26 swept high off target under little pressure.

But, in the 17th minute, Liverpool struck. The Coutinho-Sterling connection saw the former smartly thread through the latter to break in behind the backline and try to send an immediate low centre in the direction of a supporting teammate.

Leicester skipper Wes Morgan slid in to block and was ruled by the referee to have used his hand inside the penalty box. Spot-kick duties demanded Gerrard and the midfielder was faultless in dispatching into the right corner from 12 yards for the opener.

Adam Lallana walked away with a double from the impressive win over Swansea City on Monday and was close to another here when Mamadou Sakho fed Moreno and the Spaniard pulled the ball back to the edge of opposition territory. But the No.20's eventual drive drifted too wide.

It was 2-0 with 39 minutes showing on the clock, however. An extended and dangerous dribble forward by Coutinho carried the in-form Brazilian into space and as he tried to loft a pass, this time defender Danny Simpson was penalised for handball.

Same scenario, same taker but different corner - Gerrard slammed home to the left past Ben Hamer to double the Reds' advantage and ensure Rodgers' charges possessed an encouraging cushion at the interval.

Upon their return, Moreno instantly thrashed a blast into the Kop. Meanwhile, a knock to Lallana heralded his precautionary departure 10 minutes into the second period and the introduction of striker Fabio Borini, with Sterling moving slightly deeper.

Substitute Nugent perhaps should have halved the deficit but merely glanced an inviting corner beyond the far post when a more powerful nod was required. Suddenly, it did not matter for the Foxes.

For Nugent capitalised on a knockdown to scissor-kick a sublime volley past Simon Mignolet from distance and, within moments, Schlupp sized up an effort at long range and slotted a finish into the Belgian custodian's bottom corner to stunningly level proceedings at 2-2.

Another attacking presence, Lazar Markovic, was added to the mix, Borini fired over the crossbar from Sterling's cutback set-up and the irrepressible Coutinho shimmied and shot straight at Hamer in search of a winner.

With time running out, Sakho managed to find Henderson bursting forward but the vice-captain's dinked strike deflected off the Leicester 'keeper and out of play, and the subsequent full-time whistle meant the spoils were shared.