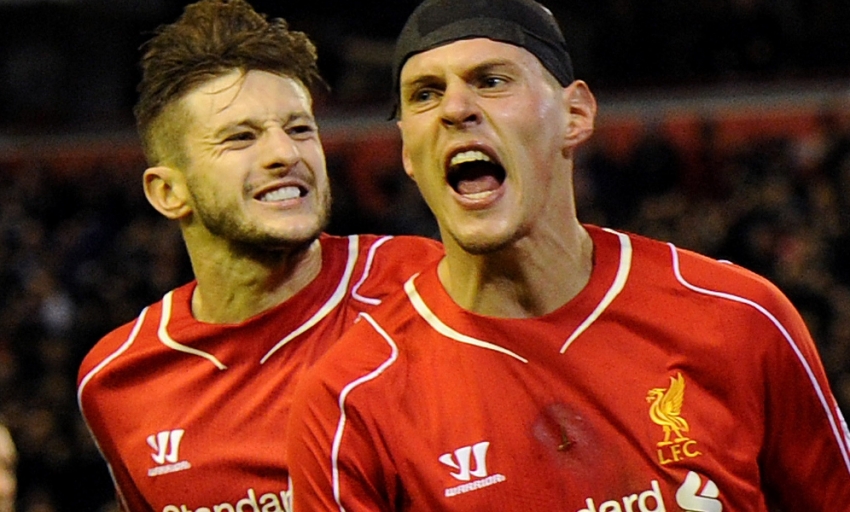 Sakho returns to the side to face Arsenal

Martin Skrtel scored a dramatic equaliser in the 97th minute of the match to salvage a 2-2 draw for Liverpool from their Barclays Premier League contest with Arsenal on Sunday.

Philippe Coutinho capped an incredibly industrious first half with a fine finish off the far post mere seconds before the break, although the Londoners responded immediately - Mathieu Debuchy directed a powerful header beyond Brad Jones.

Despite the hosts dominating for large periods, in terms of possession, territory and opportunities, an incisive counter-attack set up Olivier Giroud to slam in a goal on 64 minutes that threatened to ruin a strong Reds performance.

But they refused to back down and when a corner deep into a significant amount of stoppage time arrived at Skrtel, the centre-half thundered the delivery into the corner of the net and rescued a deserved point.

Brendan Rodgers made just a single alteration to the XI that had secured progress to the Capital One Cup semi-finals by beating Bournemouth on Wednesday - Mamadou Sakho was introduced in place of the injured Dejan Lovren in a three-man backline.

A big game required great noise from the supporters gathered in L4 in anticipation of receiving an early Christmas gift, and there was no shortage in that department whatsoever. Suitably buoyed, the Reds were full to the brim with energy from the off.

Those fans were on their feet as the clock ticked into a third minute. Unshackled from his markers and free in opposition territory, Coutinho surged forward through the middle, dropping a shoulder to fool Per Mertesacker and earn a free-kick - 20 yards from goal and central.

Kopites have already watched Steven Gerrard float in set-pieces from similar positions against Everton and FC Basel in this campaign and were expectant here. The arcing curler was dispatched along the correct path but with too much power to remain under crossbar height.

Adam Lallana's trademark agility, that economy of movement that confuses defenders, carried the No.20 threateningly inside the Gunners area and shooting territory. Wojciech Szczesny was poised for a stop and would have been grateful to see the drive swiped too high.

During this fixture in February, Liverpool were 4-0 ahead after just 20 minutes. There was, understandably, no repeat by that stage this time but there was a clear sense that the home side wanted to prove a point, wanted to show their mettle against a rival.

Seemingly central to everything in an attacking sense were Coutinho and Lazar Markovic, dovetailing to creative effect in the left channel. The former, in particular, was faultless with each touch, though should have stressed Szczesny more with a low blast on the half-hour.

The Arsenal goalkeeper was genuinely worked five minutes later, now by Markovic. Gerrard's persistence allowed the Serb to breeze in behind and a rapid piece of acceleration took him to the near post. His poke across was the correct choice, but Szczesny sprawled to block.

Raheem Sterling, once more leading the line, next rolled Mertesacker, who had drifted too far from his own goal. That presented Europe's new Golden Boy with a chance to slide a pass into Markovic, cutting in from the left flank. His subsequent strike sailed over, however.

But accuracy was no problem for Coutinho in the final minute of the period. Jordan Henderson moved in from the other wing and fed the Brazilian. He took Debuchy out of the equation with one movement and drilled unstoppably off the left post and into the back of the net for 1-0.

Delight turned to dismay within seconds, though, when the Reds could not sufficiently clear a disputed Arsenal free-kick from the right and the ball looped to the far post, where Debuchy rose above Skrtel and nodded home an equaliser off the defender's head.

Liverpool were sent back out long before their visitors after the interval and soon the skipper was standing over another set-piece. His whipped delivery was well defended, although the rebound fell to Coutinho. It was an inviting volley and struck with solid technique, though off target.

A head injury to Skrtel precipitated a lengthy pause in proceedings but when the action resumed, it remained a hugely absorbing contest. Lucas Leiva thundered over, Gerrard missed a diving header in the same way and Giroud lashed a left-footer wide.

The Frenchman was clinical with his next opportunity. Alexis Sanchez fed the supporting Kieran Gibbs along the left side and the full-back swept a pass into Giroud. He knocked it around the corner to Santi Cazorla and when a return was instantly pinged into the box, fired underneath Jones for 2-1.

Further frustration was added in the form of two late yellow cards and therefore a red for Borini amid nine minutes of stoppage time, but a roar emanated from all sides of the stadium when Skrtel - bandaged from his earlier mishap - rose to power home a superb header.