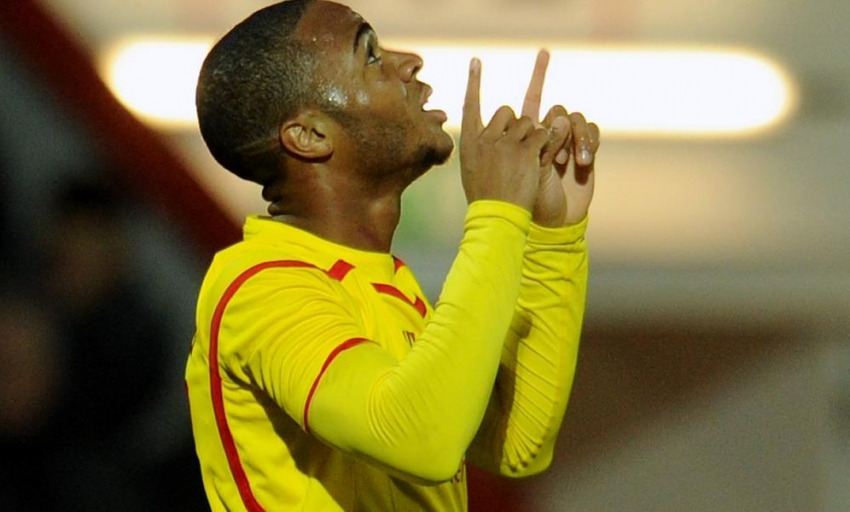 Raheem Sterling scored twice to inspire a 3-1 win over Bournemouth at the Goldsands Stadium on Wednesday night and earn Liverpool a place in the semi-finals of the Capital One Cup.

Sterling's searing pace and clinical finishing put the Cherries to the sword on a night when the likes of Philippe Coutinho, Adam Lallana and Lazar Markovic provided an incisive, creative force to drive the Reds forward.

After missing chances to score against Manchester United at the weekend, Brendan Rodgers backed the 20-year-old to shine as the catalyst of his side - and Sterling stepped up to the plate in style.

He raced into the space to turn home Jordan Henderson's cross and open the scoring in the 20th minute, while Markovic doubled the advantage with his first goal for the Reds - a composed finish from the edge of the penalty area.

Sterling slalomed through the Bournemouth defence to bury his second after the interval and while a consolation strike from Dan Gosling reduced the arrears, Liverpool saw the game out to secure a path to the last four of the competition.

Before the Reds set about dominating the first half, panic spread through their defensive ranks. Callum Wilson, wriggling through the penalty area, left a trail of yellow shirts in his wake, nut-megging Martin Skrtel in the process - but he could only side-foot wide as Brad Jones advanced.

Liverpool hit back with venom. Sterling, through the middle just as he was at Old Trafford, dropped off cleverly to hold the ball up. Lallana and Coutinho swapped passes before the former unleashed a thunderous drive and Artur Boruc flew to his right to push the ball wide.

The Reds buzzed with menace; they were meticulous and composed in their play. Meanwhile, the home side were pegged back by a pressure which was building slowly, stemmed only on occasions when bodies were hurled in the way of stinging shots from Steven Gerrard, then Coutinho, then Lucas Leiva.

Then the breakthrough. Markovic, neat and tidy throughout the opening exchanges, launched a pin-point pass to the back post. Henderson arrived to cushion the ball into the middle with a soft header and Sterling struck to open the scoring.

Liverpool fans were grinning from ear to ear. They were relishing a fluent display. Relishing watching Coutinho, in particular, as he strolled about the pitch, pushing the ball one way, sweeping it back in the other direction, ducking and diving, prying and probing - and, eventually, creating a second goal.

The No.10 danced down the touchline with the ball glued to his bright white boots before blasting low at goal. Coutinho's effort was denied by Boruc, but there was Markovic, poised on the edge of the box to steer a superb half-volley into the corner of the net for 2-0.

Rodgers' side had a cushion in the game, but they almost tossed it away within two minutes of securing a second goal. The ball flew in from the right, sending Liverpool players stumbling towards their own net. Yann Kermorgant arrived, but he could only fire high and wide over goal and there was relief for the visitors.

The Reds proceeded to sit back, allowing Bournemouth the ball in their own half and closing out the space when the opposition chose to foray towards Jones' goal. It wasn't always a successful deterrent, however, as Gerrard was forced to block bravely from Gosling's dangerous drive.

Mamadou Sakho was introduced in place of Dejan Lovren at the interval and when the players were back on the pitch, Liverpool picked up where they left off as Lallana steered Henderson's corner narrowly wide.

Then came the Reds' third goal. Lallana picked up Kolo Toure's pass and drove at the Bournemouth defence, who were back-peddling furiously. It was made for Sterling and Lallana obliged, threading the ball into his teammate's path. The youngster went one way, then another, before firing low into the net.

However, Bournemouth hit back to score and galvanise the home crowd. Matt Ritchie raced down the right and centred the ball for Gosling, who rode a risky challenge in the penalty area, strode forward with the ball at his feet and fired low beyond Jones.

Then, two quick-fire, clear opportunities arrived back-to-back. First Henderson and Toure allowed Eunan O'Kane to ghost in and loop a header dangerously close to Jones' far post, but it was wide. At the other end Coutinho fed Lallana, who produced a sensational flick for Sterling in acres of space. He snatched at the ball and sent it wide.

Bournemouth came again, though, as Goldsands began to rock with passion. Gosling struck the post with a curling drive, Henderson got a crucial touch as Ryan Fraser shaped to shoot and Ritchie smashed the ball wide from close range when the goal was at his mercy.

Emre Can came on for Coutinho to add steel to the Reds' midfield and Liverpool managed to steady their ship on the South Coast. From there, the game was evenly balanced, which suited Rodgers' side perfectly as they kept the score at 3-1 to seal a place in the semi-finals of the competition.