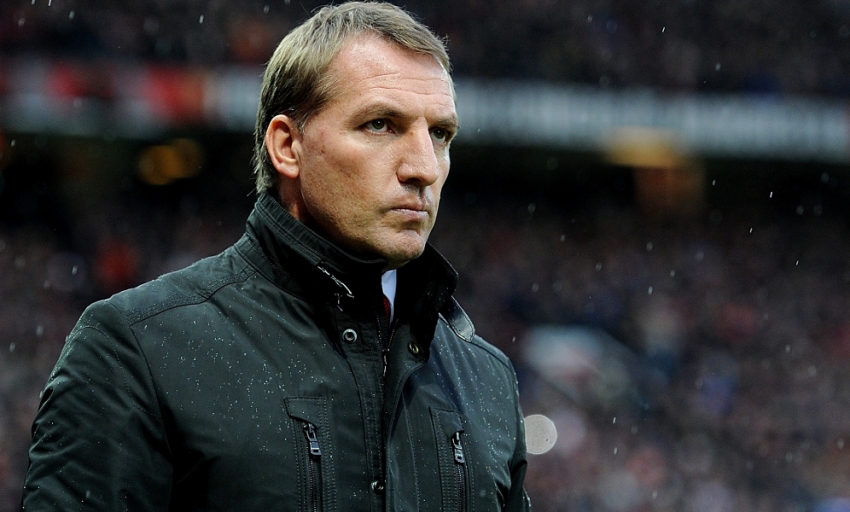 Brendan Rodgers believes Liverpool could have taken something from their 3-0 defeat at Manchester United on Sunday had they been more clinical in front of goal at Old Trafford.

Wayne Rooney put the home team ahead after 12 minutes, sweeping Antonio Valencia's cutback from the right beyond Brad Jones after Raheem Sterling had been denied by David De Gea at the other end just seconds earlier.

Juan Mata extended United's lead just before half-time when he headed in at the back post before Robin van Persie completed the scoring in the closing stages of the contest.

However, the Reds created a host of chances, with Sterling and substitute Mario Balotelli in particular finding themselves thwarted by De Gea on several occasions.

Rodgers told his post-match press conference: "I don't think we deserved to be on the end of the scoreline but they were probably much more clinical when they needed to be.

"It's not often you come here and create that many chances. We won here 3-0 last year and probably didn't even create half of the opportunities. For the goalkeeper to get man of the match tells you everything.

"It was a side of the game I was looking for the team to improve on - we created more chances today than what we have done for maybe five or six games, so I was pleased with that aspect but obviously disappointed with the first and third goals we conceded. The second one was clearly offside and was a poor decision at a critical time in the game.

"I don't think with the players we had and how they worked, we could have done any more. If we don't make mistakes, the game is much closer."

Rodgers continued: "We had enough chances to get something from the game and it probably epitomised what our season has been like - there have been nowhere near enough goals in the team and that puts pressure on you in the games. When you concede then you sometimes think you can't get the goals, and that has clearly been an issue for us.

"You come here and create so many chances, you'd expect to score at least two or three of those, but it wasn't to be. The players kept going and they gave everything into the game, but we just couldn't find the goal that could get us back into the game."

Sterling spurned arguably Liverpool's best chance of the afternoon when he shot straight at De Gea after Jonny Evans' wayward back pass had inadvertently put him through on goal.

Reporters asked Rodgers for his view on the 20-year-old's performance and about his overall on-field confidence.

"I thought the kid was outstanding today," stated the boss. "I asked him to play central, where he could move across the line and penetrate in behind or come in short.

"I thought he was outstanding at that. He got himself chances. His first chance came when Adam played a great pass in and he's hit it off his left side, but De Gea's made a great save. He's had other chances when he's anticipated and ran through.

"He's a wonderful young player. There will be a point where he will get a breather and a rest. But at this moment in time, he's our main catalyst in the team and he still looks fresh. He's working very well."

Liverpool kicked off at Old Trafford operating with a different formation.

Rodgers said: "We changed the shape of the team and played 3-4-3 to try to get more bodies in the central area in the final third of the field, and give us an extra body to build the game from behind. We had speed on the sides that could go and support that.

"We were behind in the first half, but I thought we were the better side. We could have shown a little bit more quality at times in the final pass, but I always felt we had opportunities to score.

"In the second half, we needed the next goal in the game. Once it goes to 3-0, it can be really difficult, but we still kept going right until the very end and I could not have asked any more from the players we had.

"For me, the whole scenario is about looking to build the team again. We had a team that was growing for a couple of years, but the squad has changed now through injuries and whatnot. We're having to recapture the team ethos again, and that's something we're looking to build towards.

"It's not easy, but whenever it's consistent that you're not scoring goals, you're always going to try to find the solutions for that. There'll be a number of reasons why it changes, but the bottom line is, we just haven't been consistent enough over the course of the season."

There were also alterations in playing personnel, too.

Rodgers elected to make four changes to his line-up against United, most notably with Jones starting a first Barclays Premier League game since March 2013 in goal, and Simon Mignolet named on the bench.

Explaining his decision, the manager said: "It was about giving an opportunity to someone. People might have expected it a few weeks ago, but I just felt that after the Basel game that I needed to make the change.

"If you look back in the games, we were starting to keep a few clean sheets, but this is something that I felt we needed to do. The timing was for today.

"Simon has been fine. He's a really good professional. I spoke to him the other day and he accepted it and understood it. I thought Brad Jones didn't have a great deal to do today other than pick the ball out of the net. He had a couple of saves that bounced in front of him and he took them well. But I just felt that I needed to make the change.

"I said to Simon that it was for an indefinite period. He's played in a lot of the games. It's something that can happen to a 'keeper. When you come out of the firing line a little, it can help you. It allows you time to reflect.

"Brad is a very capable 'keeper. He was always going to play in the Bournemouth game anyway. I just felt that I wanted to change it. We have to find the solutions across the squad to be better."

Liverpool were required to make an early change when Johnson was withdrawn during the first half as Kolo Toure came on to replace the full-back, while later in the game, the manager opted to take off Adam Lallana and replace the midfielder with Balotelli.

"Glen was a groin injury - he's over-stretched his groin," confirmed Rodgers. "With Adam, we just felt we needed something more through the middle. I thought Adam did well, but I felt we needed some presence and to slightly adapt the system."

Journalists gathered in the media room at Old Trafford asked Rodgers what he felt was required to get Liverpool's form back to the kind of consistent levels witnessed last season.

He replied: "I think it's just that emphasis on the team. I think it's pretty clear that we're obviously searching to find solutions in the games to get wins. The players are working incredibly hard.

"There's not a lack of effort. You saw the attitude today, it was first-class, the players were giving everything. They were pressing, they were working. But when you're not winning as consistently as we were last season, then the feeling is a little bit different.

"We want to get wins and we want to concentrate on our performance. That was key coming into the game today - the ability to want to perform. If we can perform like that and create the chances, then we'll win games. That's always your best solution in order to make the team better."