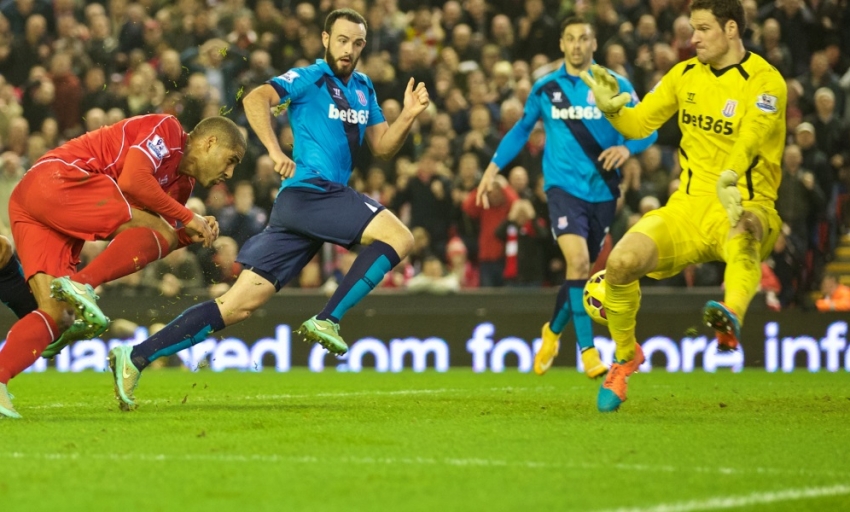 Glen Johnson's late header ensured Liverpool returned to winning ways as they secured a 1-0 victory over Stoke City at Anfield on Saturday afternoon.

After a first half lacking any goalscoring opportunities of note, the game sprung into life after the interval with both sides threatening to take the lead.

First, Bojan struck the post for the Potters before Lucas Leiva was thwarted when one on one with Asmir Begovic. Joe Allen then clipped the top of the woodwork from a well-crafted opening.

Steven Gerrard entered the action as a late substitute 16 years to the day of his first appearance for the club as the Reds pressed for a late winner.

And with time ticking away, it duly arrived when Rickie Lambert's looping header crashed against the crossbar, allowing Johnson to stoop and nod in a vital goal to secure victory.

News of Brendan Rodgers' team selection confirmed two changes to the side deployed against Ludogorets Razgrad in midweek, with Jose Enrique and Philippe Coutinho restored to the starting line-up.

They replaced Javier Manquillo and Gerrard, who was marking the anniversary of his first-team debut for Liverpool which came back in 1998 as a late substitute against Blackburn Rovers.

On the pitch, a tepid opening to the contest yielded little in terms of clear-cut opportunities for each team as the opponents weighed one another up, though a brilliant piece of control and then cross from Raheem Sterling could have resulted in an opening, but he was unable to find a teammate in the six-yard box.

The game's first effort on goal did not arrive until the 27th minute - a long-range Lambert free-kick cleared the crossbar of Begovic as Liverpool toiled in their attempts to breakdown the visiting rearguard.

Soon after, Enrique produced an inviting centre that just evaded Lambert before a short-corner was deflected into the path of Martin Skrtel on the edge of the area, who took a touch on his knee before skewing a volley wide of the near post.

Four minutes before the break, the home fans were baying for a penalty to be awarded when Lucas went down until the challenge of Glenn Whelan as he attempted to control a bouncing ball in the box, but referee Craig Pawson was unmoved by the appeals.

It ensured the opening 45 minutes concluded without a goal at Anfield - and much for Rodgers to ponder during the interval.

Liverpool instantly set about trying to break the deadlock following the re-start; Lucas's tenacity in pressing high up the pitch almost presented a chance for Lambert, but the ball rolled slightly ahead of the England striker.

With 51 minutes on the clock, the best effort of the game so far arrived. Jordan Henderson dummied a pass to allow the ball to roll to Lambert and spun off for the return. It did come back to him - albeit inadvertently via a deflection off Marc Wilson - and the No.14 cracked a snap-volley into the side netting.

At the other end, Stoke's first shot on target of the afternoon came after Mame Biram Diouf ran through onto Bojan's pass, but Simon Mignolet sprung from his line to stifle the strike.

On the hour mark, the Potters went even closer as Bojan danced into the box from the left and smashed one against the upright.

Liverpool maneuvered straight up the other end and Sterling bounded beyond two defenders before sliding millimetres wide of the far post.

By now, the encounter was wide open and Lucas was next to go close, collecting Sterling's pass and finding himself faced with Begovic. The Brazilian could only drive straight into the palms of the visiting stopper, however.

Lambert then steered a low effort at Stoke's No.1 from Johnson's centre and, with the Reds now fully roused, intricate play between Coutinho and Sterling resulted in the latter squaring for Allen, who hooked the ball onto the top of the crossbar from eight yards.

With 15 minutes remaining, Rodgers introduced Gerrard into the action in place of Lucas on a landmark day for the captain - but Liverpool had Sterling to thank for denying Stoke a goal when he blocked Diouf's goal-bound shot on the line from a corner.

It proved a decisive moment as, with four minutes remaining, the Reds finally penetrated the Stoke defence.

Lambert's aerial effort from Henderson's cross floated over Begovic but onto the crossbar. Johnson reacted quickest, however, to force the ball over the line with a stooping header and grasp three important points for Liverpool.