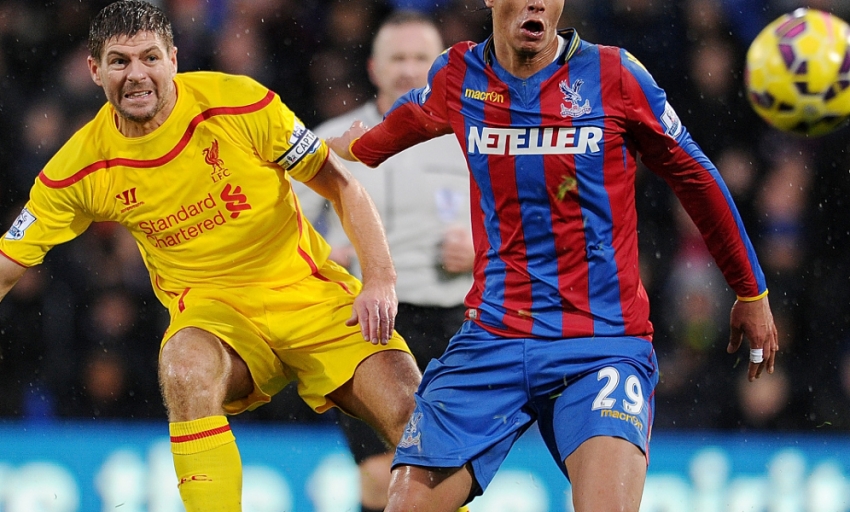 Liverpool saw an early lead overturned at Selhurst Park on Sunday as Crystal Palace came from a goal down to inflict a 3-1 defeat in the Barclays Premier League.

Brendan Rodgers' side went ahead in the game after just two minutes of play when Rickie Lambert netted his first ever goal for the club, tucking the ball away to silence the home crowd.

However, Palace levelled thanks to Dwight Gayle, took the lead late in the game through Joe Ledley and ensured victory shortly after when Mile Jedinak curled a ferocious free-kick beyond Simon Mignolet.

The stadium was shuddering with noise as the teams took to the turf, but within minutes all that could be heard inside the ground was the din of Kopites roaring their approval after Lambert opened his Reds account.

Adam Lallana scooped the ball from Philippe Coutinho, spun, saw Lambert set off and floated a precise, diagonal pass in behind the opposition back four and into the pocket of space where his teammate was arriving.

Two touches of Lambert's right boot was all it took to achieve a childhood dream as the Kirkby-born forward trapped the ball in the penalty area and tucked it beyond the onrushing Julian Speroni to break the deadlock.

Liverpool's lead lasted for 15 minutes. Ledley powered forward through the middle of the park and nudged the ball to Yannick Bolasie, who tore up even more turf before arrowing an unstoppable strike onto Mignolet's right post.

Bolasie's effort bounced clear - yet to the Reds' dismay, the first to react was Gayle, who came galloping into the penalty area as the ball flew out to meet him and the Palace man was able to steer his shot into the net.

Gridlock ensued in the tumbling rain until the match reignited once more with chances at either end. Steven Gerrard curled a free-kick into the penalty area, Lambert charged onto the cross but could only place his header over the crossbar.

Mignolet's instincts then ensured the scores remained level. Bolasie unleashed another of those devilish drives - his strike spinning and swerving towards the goalkeeper's left. However, the Belgian flung himself low to apply a strong palm and push the ball clear.

Joe Allen created the next chance by breaking free of his marker and finding Lambert at the far post, but the Reds' No.9 nodded wide as he raced onto the perfectly placed pass.

Bolasie was wreaking more havoc. His quick-fire exchange of a one-two with Jason Puncheon took three yellow shirts out of the game completely - yet Javier Manquillo managed to recover and block the winger's attempt with a terrific lunge.

Gerrard lashed two strikes wide of the mark after the interval before the best of the early chances fell to Martin Skrtel, unmarked at the far post; however, the Slovakian sliced his attempt and Lambert was unable to divert the ball towards goal.

Palace then staged a period of pressure in front of their most vocal supporters in the Holmesdale Stand. Jedinak, their captain, drilled an effort towards goal after patient build-up play from the hosts, but Allen hurled his body in the way to deflect the ball clear.

Speroni was called into action to smother the ball when Glen Johnson aimed a cross into the centre to where Allen was arriving, while Mignolet did the same at the other end to deny Bolasie a goalscoring opportunity.

Then came perhaps Liverpool's best chance of the second half. Raheem Sterling, hemmed in by players and losing his footing in the penalty area, managed to scoop the ball wide to Manquillo, but the Spaniard dragged his effort wide across goal.

Rodgers looked to change the game through two back-to-back switches, swapping Fabio Borini in for Lallana and introducing Emre Can in place of Allen. However, Palace took the lead in the 79th minute.

Bolasie broke free down the right flank and picked out Ledley, who was unmarked in the penalty area and the midfielder calmly fired home through Mignolet's legs.

Then, with eight minutes left on the clock, Jedinak produced an unstoppable free-kick from the edge of the box, curling beyond Mignolet and into the top corner to put the game beyond Liverpool.