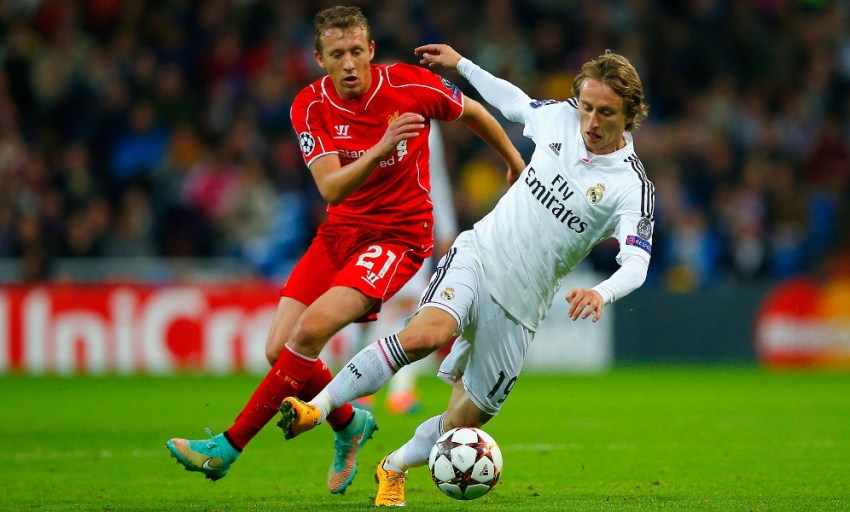 Liverpool were narrowly outdone by Real Madrid in their Champions League Group B contest on Tuesday evening, with a single goal earning the Spaniards a 1-0 victory at the Santiago Bernabeu.

Having found the target twice in their meeting at Anfield, Karim Benzema proved the undoing on this occasion too, capitalising on an assist lashed across the area by Marcelo to earn Los Blancos an advantage midway through the opening period.

The outcome means the Reds must secure positive results in their two remaining fixtures of the section, with a trip to Ludogorets Razgrad and a home tie against FC Basel still ahead.

Brendan Rodgers opted for seven changes to the selection he made for the defeat by Newcastle United, overhauling his outfit as they went in search of crucial points in their quest to qualify from a congested Group B.

The visitors were afforded time to take a series of touches and compose themselves amid a cauldron of noise at the gigantic arena, although within four minutes Simon Mignolet was required to spring left and claw out a James Rodriguez left-footer from two yards inside the penalty box.

Cristiano Ronaldo was the next to threaten, collecting a pull-back by Benzema inside the left channel and immediately shaping to curl into the far top corner - it was a good effort too, but again the Liverpool goalkeeper reacted quickly to reach and handle the danger.

Real were a constant menace in their desire for a breakthrough, yet with Joe Allen, Emre Can, Lazar Markovic and others more than willing runners and showing deft control in possession, Rodgers' side regularly sought to find space on the counter-attack.

Their resistance was broken on 27 minutes, however. Marcelo darted along the left flank to receive a pass and, with freedom to deliver a cross, picked out Benzema at the back post for the Frenchman to send a first-time finish high into the roof of Mignolet's net.

Ever keen to score from any distance, Ronaldo thrashed a free-kick from fully 30 yards that was central enough to be punched away comfortably, before Raphael Varane tried to loft over the backline for the goalscorer only for Kolo Toure to cover in time.

Marcelo prompted another slick move when he dispossessed Can and completed a one-two with Benzema, opting to volley the return in the direction of the opposite corner. Once more, Mignolet was equal to the task and the scoreline remained 1-0 at the interval.

Liverpool maintained their commitment to breaking with intent after the restart and Adam Lallana had space to strike a snap-shot with his left foot having been fed by Alberto Moreno - wide from the Englishman, but the travelling Kopites high up in the stands were buoyed.

In riposte, Ronaldo and Benzema schemed forward with a neat interchange that seemed to have provided the former with a clear shooting chance. Instead, Toure importantly blocked. Rodgers then introduced Steven Gerrard and Raheem Sterling for Lucas Leiva and Lazar Markovic respectively.

Gareth Bale had also been added to the action by Real coach Carlo Ancelotti and the Welshman was inches away from clinching a second goal for the reigning champions when he diverted Marcelo's tee-up onto Mignolet's crossbar and back out.

The Real No.11's remarkable pace forced Moreno to chop him down at the last second after the winger had been released with grass to run into, but Mignolet got two strong hands behind the subsequent set-piece effort by the same troublesome player.

Liverpool pushed until the last second to register a vital equaliser, but a goal eluded them and the hosts secured a fourth consecutive win in the group. For Rodgers and the Reds, two pivotal games now await in the battle for a berth in the Champions League knockout stages.