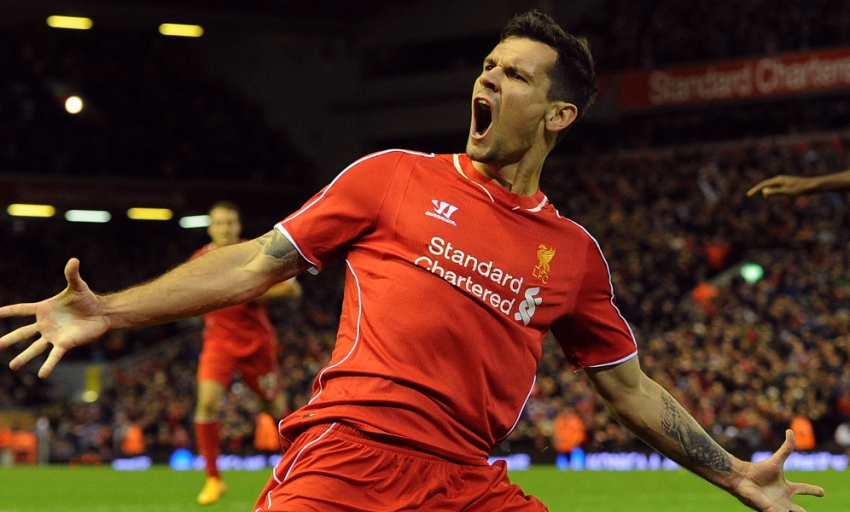 Late goals from Mario Balotelli and Dejan Lovren secured Liverpool's place in the quarter-finals of the Capital One Cup with a dramatic 2-1 victory over Swansea City at Anfield.

The Reds looked to be heading out of the competition after Marvin Emnes's well-taken goal had given the visitors the lead heading into the final stages.

But Balotelli came off the bench to turn a Fabio Borini cross over the line from close range with four minutes remaining to restore parity, before Lovren headed home Philippe Coutinho's free-kick deep into stoppage time to seal an incredible turnaround.

The pre-match team news confirmed wholesale changes for Liverpool, with the likes of Brad Jones, Kolo Toure, Rickie Lambert, Lucas Leiva, Borini and Lazar Markovic named in the starting XI. Jordan Henderson, meanwhile, donned the captain's armband from the off for the first time.

In total, Brendan Rodgers made nine alterations to the side that took to the field against Hull City on Saturday as the Reds went in search of a last-eight berth.

And the hosts started brightly under the Anfield floodlights. Henderson clipped a free-kick over the crossbar of Gerhard Tremmel before Lucas stung the Swansea custodian's palms with a drive from the edge of the box inside the opening 10 minutes.

Liverpool were entrenched in their opponent's half, with Coutinho pulling the strings in an attempt to muster a breakthrough.

The Brazilian was heavily involved in a fine opportunity to open the scoring on 27 minutes when he spearheaded a counter-attack from deep before slipping a neat pass into the feet of Henderson. In an instant, the skipper fed Markovic inside the box, but he could only skew wide from an angle.

On 34 minutes, Borini displayed nimble footwork on the edge of the area amongst a crowd of bodies to craft a shooting opportunity, which he curled inches wide of the bottom corner.

Less than 60 seconds later, the Italian was at it again, powering into space just outside the box before unleashing a low drive which required a fine stop by Tremmel to thwart it.

At the other end, Nathan Dyer had an effort deflected behind while ex-Red Jonjo Shelvey's low free-kick drew a smart stop out of Jones to ensure the half reached its conclusion without a goal.

The second period began in a similar pattern to the first, with Liverpool pushing for the opener. Coutinho tested Tremmel once more, while Bafetimbi Gomis's header from a Shelvey corner flew straight into the gloves of Jones.

Back came the hosts and a neat exchange between Lambert and Borini set up Coutinho once more on the edge of the area, but he scooped into the Kop.

And with 66 minutes on the scoreboard, Swansea stunned Anfield by taking the lead when Emnes swivelled to steer a first-time volley into the bottom corner after Taylor's tackle had lofted the ball into his path.

Liverpool's response saw Glen Johnson's arrowed strike from distance sting the palms of Tremmel before Lambert's prod goalwards from the resulting corner required the intervention of Jay Fulton to stop it crossing the line.

The England forward tested Swansea's goalkeeper again soon after, as did Coutinho, while Rodgers introduced Adam Lallana and Mario Balotelli into the action in search of an equaliser.

And it worked to perfection, as with just four minutes left, the latter met a pinpoint Borini cross with a close-range finish to restore parity and set up a grandstand finish.

Liverpool poured forward as they sought a winner and Swansea's hopes were dashed by the sight of a straight red card for Federico Fernandez for a challenge on Coutinho.

It proved costly for Garry Monk's side as the Brazilian stepped up to whip the resulting free-kick to the back post, where Lovren arrived to head in a winner in front of the Kop and send the Reds into the quarter-final draw.