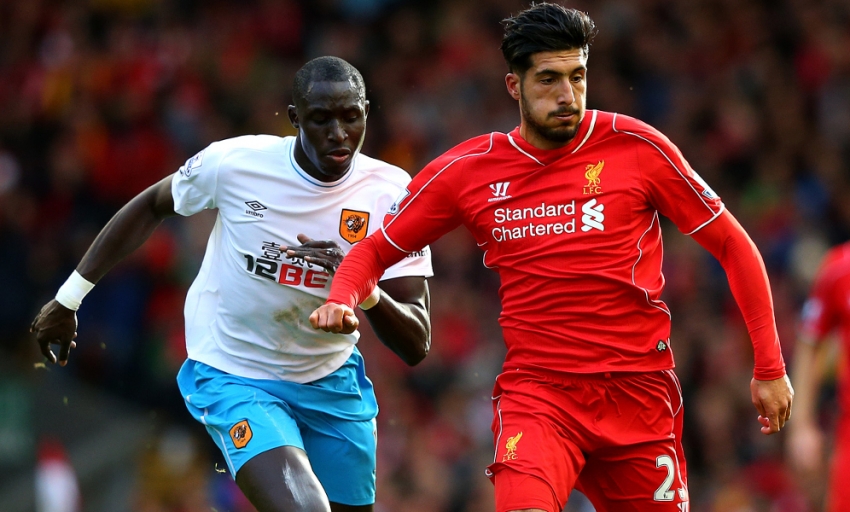 Liverpool were denied a third successive victory in the Barclays Premier League after being held to a goalless draw by Hull City at Anfield on Saturday.

The Reds were in control of proceedings for much of the fixture on home soil, commanding possession for large periods and creating the more inviting chances, but ultimately could not produce a sought-after winner.

Targeting maximum points once more in the Premier League and an immediate response to a Champions League defeat by Real Madrid in midweek, Brendan Rodgers made three changes to his team - Emre Can, Adam Lallana and Javier Manquillo were brought in.

With a crisp afternoon on Merseyside providing the perfect conditions for football, both sides started the encounter with a commitment to passing and probing, exchanging possession in short, sharp bursts as they moved into opposition territory with intent.

Keen to impress, Can was a bundle of energy in the opening stages, although he had to recover from a brief injury scare when felled by a Tom Huddlestone lunge as the German sensed an opportunity to stride forward with his powerful frame from the halfway line.

Hull goalkeeper Eldin Jakupovic then prevented Liverpool from establishing an advantage twice in quick succession. Having stretched to the left to palm away a towering Dejan Lovren header from Steven Gerrard's corner, his hands were stung by a Mario Balotelli strike toward the same post inside the right channel.

While conscious of the danger posed by the visitors on the break, the Reds were steadily taking command of the occasion and Joe Allen was the next to try his luck, thrashing wide of the left post from the edge of Tigers territory after being teed up by Alberto Moreno.

That counter-attacking capability was evident four minutes before the break when Hatem Ben Arfa scampered along the right flank and flew into the penalty box. Even as he stumbled the wide-man produced a pullback into the middle for Jake Livermore to hammer at goal, but Simon Mignolet handled the hit well.

The Belgian stopper could only watch, however, when Huddlestone smashed a left-footer from fully 30 yards that took a worrying deflection off Martin Skrtel. It travelled off target, though, to herald the half-time interval with no registrations on the scoresheet.

When the second period commenced, there was little rhythm in either direction and the lull was punctuated only by a direct piece of play from Abel Hernandez, who collected a knock-on, swiveled and lashed a long-ranger that Mignolet caught at a comfortable height.

At the other end, Gerrard whipped the wrong side of the right post in front of the Kop following a slick one-two with Raheem Sterling. Then, on the hour, Rodgers called for Philippe Coutinho and Rickie Lambert to provide renewed impetus; Allen and Lallana departed the scene.

Balotelli seemed a certain scorer when Can expertly flicked a corner to the back post but the ball was cleared away as the Italian tried to pounce, and the same combination could have proved fruitful moments later if the No.45 had made contact with the midfielder's precise cross from the right side.

By now the hosts were completely dominant, particularly with Lambert offering a presence to play off, although the breakthrough remained elusive. In his final substitution, the manager added vice-captain Jordan Henderson with a quarter of an hour remaining.

Sone Aluko had been introduced by Hull boss Steve Bruce and the forward's running and trickery caused problems for the hosts, not least when he made the most of a bouncing ball and shot from the left edge of the box. Again, Mignolet thwarted the effort calmly.

A series of claims for a Liverpool spot-kick, perhaps most strongly by Balotelli under the challenge of Alex Bruce with three minutes to play, were refused before both he and Coutinho saw attempts stopped by Jakupovic, forcing Rodgers' side to accept a single point.