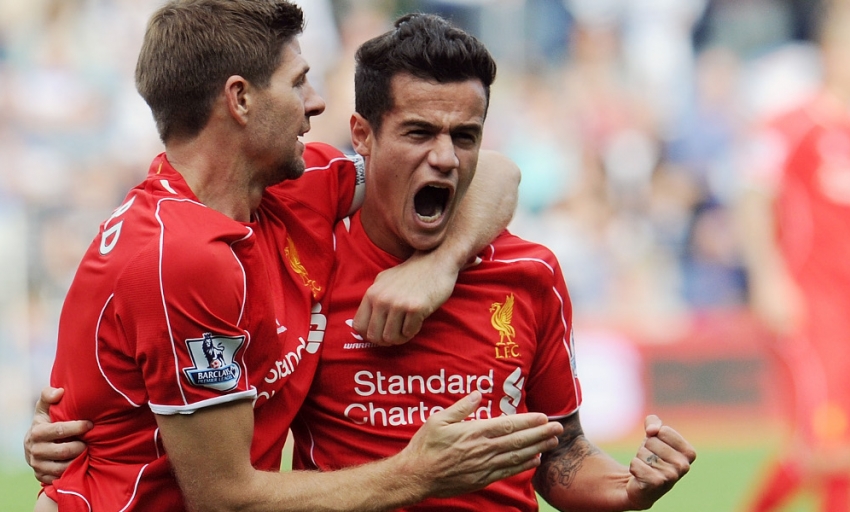 Liverpool edged past Queens Park Rangers in incredible fashion on Sunday afternoon as four goals in the final stages eventually earned the Reds a 3-2 result at Loftus Road and a second straight Barclays Premier League victory.

After a testing first half, Richard Dunne put into his own net to hand the travellers an advantage, which was later wiped out with seconds remaining when Eduardo Vargas struck back to seemingly snatch a point.

Back came Brendan Rodgers' charges and, in a blitz of activity, Philippe Coutinho shuffled into space and successfully drove into the far corner with the aid of a deflection, only for yet another Vargas goal to level the scores at 2-2.

Despair turned to delirium, however, as there was still enough time for Liverpool to launch a final counter-attack. Coutinho sliced open the QPR defence, Raheem Sterling collected and squared, where home defender Steven Caulker bundled over the line.

Rodgers' line-up at Loftus Road showed four changes from the side that saw off West Bromwich Albion two weeks ago, with Emre Can notably handed a maiden start for the club since his summer switch. Mario Balotelli, Jose Enrique and Glen Johnson were all restored too, with Steven Gerrard moving into a more advanced role.

A lofted, diagonal delivery from the left into the robust presence of Bobby Zamora, positioned on the edge of Liverpool territory, brought an initial sight of goal for Charlie Austin with exactly two minutes on the clock but the Rangers No.9, leaning back, lashed high over the target.

The same protagonist perhaps should have scored shortly after when persistence took the striker beyond awkward challenges by Johnson and Martin Skrtel and into the penalty area. But, importantly, Simon Mignolet rushed out on an angle and swarmed around his poked low finish. The rebound did fall back to Austin, who swiped wide as he struggled for balance.

QPR's aggression off the ball and rapid approach play pushed the Reds deep into their own half for much of the opening 20 minutes and when a release finally looked possible, courtesy of a delightful Adam Lallana through ball, the onrushing Jordan Henderson was ruled offside when in behind the defence.

Home goalkeeper Alex McCarthy was called into action midway through the opening period as Balotelli twisted and turned at the corner of the box. Once enough room was fashioned, the Italian drove a left-footer that was relatively straightforward for the stopper to handle.

On 28 minutes, the hosts were left perplexed at their failure to take the lead. Zamora ghosted inside the right channel, unattended, and stretched to send it into the middle, where Leroy Fer arrived on time but somehow smashed onto the top of the crossbar with plenty of the goal to aim at.

Remarkably, the midfielder was soon denied by the woodwork a second time. Again Zamora was the creator, spinning into space and centring for the Dutchman, who connected first with his head but only found the goalframe. Johnson, Mignolet and Skrtel combined to clear under immense pressure yards out.

The Reds responded and Gerrard looked a certain scorer when he was swept through by Balotelli 60 seconds before the break; the Liverpool captain dropped a shoulder and shaped to curl past McCarthy and into the far corner but whipped the effort too wide - goalless at the interval.

QPR's momentum was not curtailed in the slightest by the pause and Mignolet's crucial palm, diving quickly to his right, prevented a Sandro piledriver from breaking the deadlock. At the other end, Henderson skewed off target after being neatly picked out by the nous of Lallana.

Next, Austin drifted off Skrtel and onto a Karl Henry dink but, with the shooting angle ever narrowing, drilled across the face of goal. Then, with good fortune, came the visitors' finest chance of the encounter on 61 minutes.

Sterling darted forward and tried to pick out a teammate with a pass along the edge of the penalty area. Instead, a deflection carried the ball into Lallana, whose instantaneous strike from 12 yards was beaten away by McCarthy into the path of Balotelli - but the No.45 sent the rebound soaring over.

Rodgers sent for Joe Allen and Coutinho from the substitutes' bench, with Can and Lallana departing the action respectively, and finally his side found a 67th-minute breakthrough. Sterling won a free-kick on the right flank and smartly played in Johnson. The full-back crossed low into the opposition six-yard box and Dunne could only slice into his own net.

Mignolet's shot-stopping prowess was required to thwart Austin's hopes of an equaliser when the forward collected another Zamora tee-up and side-footed at the bottom right corner. Gerrard played in Balotelli as the action swung in the other direction, but his blast was blocked by Yun Suk-Young.

The 24-year-old could have sealed the result with five minutes remaining when a blistering counter-attack concluded with a precise assist by Henderson, but McCarthy got his body in the way. Buoyed by the contest still being alive, the home team capitalised.

A series of deliveries into the Liverpool box stretched the backline and when the latest to the far post from the right wing was nodded in the opposite direction by Austin, substitute Vargas snuck in to convert past Mignolet from close range.

Suddenly, the game lost any semblance of logic. The Reds burst back, with Gerrard feeding Coutinho on the left side; the Brazilian playmaker drifted into a central region and dispatched a finish that flew into the far corner via a deflection.

That still was not enough and Vargas will claim a second equaliser after rising to reach a corner and nod a header that clipped off Henderson and dribbled home at the near post. But the away side refused to give in and one final attack saw Coutinho slip through Sterling, whose square pass across the box hit Caulker and travelled over the goalline to finally seal a 3-2 scoreline.