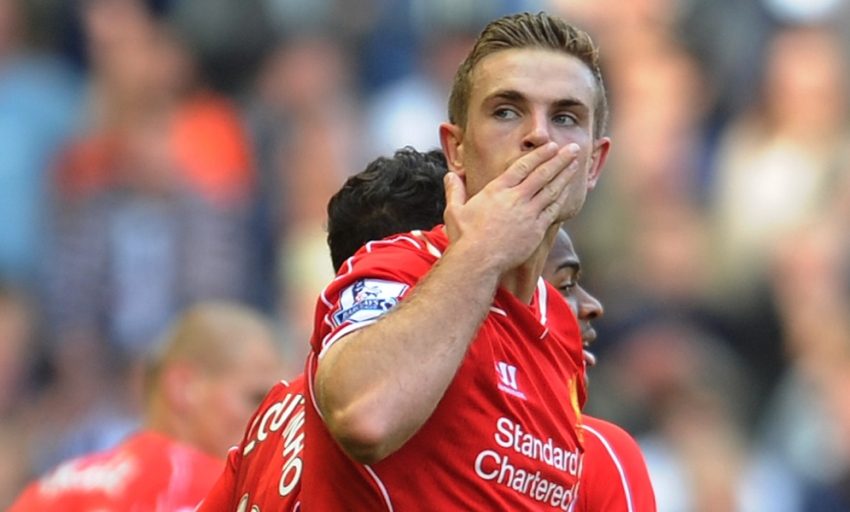 Liverpool recorded their first Barclays Premier League victory since August as Adam Lallana's maiden goal for the club and a second-half winner from Jordan Henderson proved enough to down West Bromwich Albion 2-1 on Saturday.

Seconds were left of the opening period when outstanding control and touch took Lallana to within shooting distance and a fine finish, only for Saido Berahino to win and convert a spot-kick 10 minutes after the restart.

But the Reds were not to be denied as they had been so cruelly at the same venue seven days previously, and it was Henderson who offered the ultimately decisive contribution by clipping a well-aimed drive into the far corner to ensure all three points.

When the official teamsheet dropped an hour before proceedings began, Liverpool's XI showed three changes from the side that started Wednesday's Champions League defeat by FC Basel - notably, Rickie Lambert was selected for his maiden Premier League start with the Reds, replacing Mario Balotelli.

Lallana was also reintroduced to the team, as was full-back Alberto Moreno - Lazar Markovic and Jose Enrique respectively were the other two players to drop out of the line-up. Glen Johnson was fit enough to join the substitutes following more than a month out with injury.

A methodical opening to the contest brought little in the way of threatening goalmouth action, with a curling Steven Gerrard free-kick from the right flank that was well defended by the Baggies as Lambert and Dejan Lovren sensed a chance to head home the most to report.

Acrobatics by defender Craig Dawson brought an interested murmur from the Kop but his 20-yard overhead kick was off target, while Lambert failed to suitably connect with an inviting Lallana cross and Raheem Sterling's nimble footwork inside the area deserved more than a deflected shot.

On 18 minutes, the first genuine opportunity arrived. Just as the crowd was edging toward restlessness as the backline could not see a way forward, Martin Skrtel dispatched a fine pass around the away defence into the Reds' No.9, who instantly unleashed low but was denied to the left by Ben Foster.

It was the goalkeeper at the other end, Simon Mignolet, being challenged as the half-time break drew closer. A loose pass slightly inside West Brom territory fell to Berahino and the forward immediately spun and scurried at speed with intent. Despite the attentions of Gerrard behind and Lovren in front, he created freedom for a long-range blast that was importantly fielded.

The next counter-attack was Liverpool's - possession retrieved, Philippe Coutinho into Sterling and cross-field incisively to Lambert. The England international controlled the delivery and shaped inside for a left-footer that was blocked by Joleon Lescott before it could trouble Foster between the posts.

Suddenly the tempo was lifted and Mignolet would perhaps have been left helpless had Berahino matched an excellent piece of movement and leap, capitalising on Sebastien Pocognoli's precise centre, with an accurate header from an unmarked position. Instead, he nodded over.

It proved costly, for a matter of seconds before the interval, the Reds found their breakthrough. It was all about Lallana, as his latest exhibition of deft control carried the No.20 to the edge of the Albion box, where he fed Henderson, took the back-heel return, stepped forward and brushed low into the opposite corner with his left foot for 1-0.

Liverpool started the second half brightly, buoyed by their opener, but the advantage was wiped out on 55 minutes. As Berahino collected a pass into feet 20 yards from goal, he attempted to flick around Lovren and drew a tackle from the Croatian that appeared to be outside the area. The referee pointed to the penalty spot and the striker himself slammed it in.

On the hour mark, Sterling demanded similar action when he was barged down by Craig Gardner but, when it was not forthcoming, stood back up and teed up Henderson for an ideal first-time strike. The vice-captain gratefully accepted, planting a swerving drive into the far left corner to rekindle Kop celebrations and restore the hosts' lead.

Johnson completed his comeback to fitness soon after, joining Balotelli in entering the action. The latter was soon causing concern for the Baggies too, linking neatly with goalscorers Henderson and Lallana and cracking a whistling volley that carried narrowly wide of Foster's post.

West Brom provided a warning that the encounter was by no means settled when Chris Brunt dug out a sublime, dipping cross from deep on the left wing, finding the ever-dangerous Berahino. But the subsequent header bounced onto the ground and up into the welcome hands of Mignolet.

The Reds were keen to secure a potentially game-clinching third and intricate passing on approach, particularly between Balotelli and Gerrard, pushed the Baggies back and allowed the former to train his sights on beating Foster. The goalkeeper was equal to a strike that lacked the necessary power, though.

But the home side had already done enough and their frustrating winless streak in the Premier League was brought to a satisfying conclusion as many of the squad now prepare to depart for international duty.