Liverpool legend Dietmar Hamann opened the club's brand new retail store in Dublin on Friday night, in front of hundreds of Reds fans who turned up for the occasion.

The new Republic of Ireland outpost is located at the Central Mall of the Ilac Shopping Centre in the heart of the city and matches Liverpool FC’s new retail concept soon to be applied across all LFC stores globally.

Supporters visiting the retail outlet can take advantage of access to an array of replica kits, training gear, clothing, gifts and much more.

Local Kopites took up the opportunity to be a part of the front-of-store welcoming crowd for the official launch and a number of them were able to get hold of signed club memorabilia from Hamann, who won six major honours during seven years at Anfield, as well as hear a Q&A with the former Liverpool midfielder. 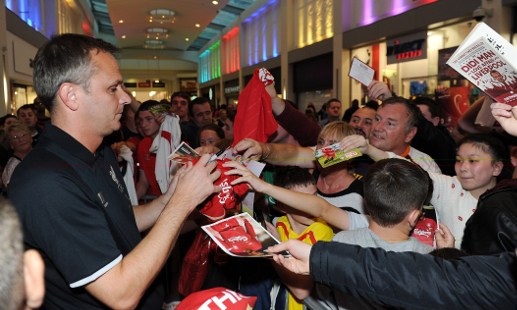 Commenting at the launch event, the 2005 Champions League winner said: "What a fantastic reception this store has had this evening – hundreds of fans have turned up to show their support for the club and it’s fantastic to see.

"LFC has such a strong following across Ireland, so it’s great that Dublin has its very own store for fans to get all things LFC."

The new international retail store is the second to open within a week, following the Malaysia store opening in Kuala Lumpur with Robbie Fowler on Friday September 26.