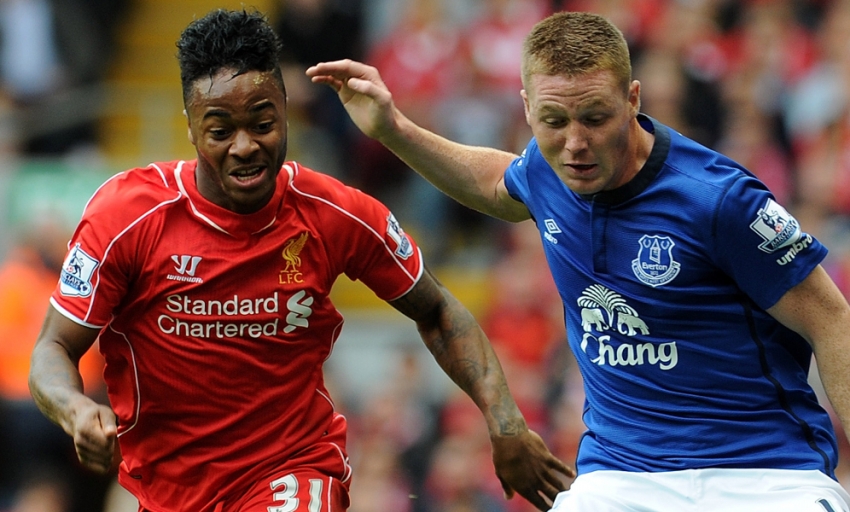 Liverpool were stunned by a dramatic stoppage-time equaliser as Everton grabbed an unlikely 1-1 draw at Anfield in the 223rd edition of the Merseyside derby on Saturday afternoon.

A sublime free-kick by Steven Gerrard midway through the second half had seemingly handed the Reds a deserved victory in an encounter that could have brought more goals only for the woodwork and a string of fine saves by Tim Howard.

But a sucker-punch arrived one minute into additional time as defender Phil Jagielka latched onto a loose rebound from a corner and smacked an arrowed finish into the net.

Brendan Rodgers' confirmed XI showed two switches from the team that was beaten by West Ham United seven days ago - Adam Lallana and Lazar Markovic were in from the start. Jordan Henderson was fit to feature too following a hip issue, while Philippe Coutinho was on the bench, but striker Daniel Sturridge was not part of the squad.

Kick-off signalled Liverpool's intent in the encounter with Raheem Sterling immediately rushing forward, and Gareth Barry was quickly penalised - plus a yellow card - for a rash sliding challenge on the incoming Lallana. Mario Balotelli took control from 20 yards but fired into the Everton wall.

Barry was at the centre of the next significant incident on eight minutes when a ferocious attack by the hosts brought a chance for Sterling to lash a volley from the left corner of the area; the midfielder seemed to block the effort with his arm, but referee Martin Atkinson did not yield to the loud demands for a penalty from players and fans alike.

Another set-piece, this time from fully 40 yards, grabbed the attention of Balotelli, who struck true and low toward the Kop but was thwarted by the stretch of goalkeeper Howard. The American produced an even better stop within seconds, palming away Lallana's precise header from Gerrard's corner as the opposition goal came under siege.

Stung but not broken by the boisterous start they had to weather, Everton began to return the favour and there was a collective inhalation when Romelu Lukaku got around Gerrard within shooting distance and shaped a curler - however, it was too close to be of genuine concern to Simon Mignolet.

Then, on 26 minutes, a last-minute clearance off the goalline was demanded of Reds defender Dejan Lovren after Leighton Baines bustled beyond the challenge of Markovic and into the box before crossing along a dangerous corridor, without result because of the Croatian.

Howard's fingers were blistered by a thunderous hit from Henderson, who had been teed up by Sterling when the 19-year-old collected a trademark cross-field Gerrard pass. As the action quickly swung the other way, Kevin Mirallas pulled up with an injury and was replaced by Aiden McGeady.

Markovic swung too high from the left flank as he sought the top corner from distance and Balotelli attempted several long-range shots that the Blues' 'keeper handled suitably. He was worked much harder when Henderson slipped in Sterling through the channel, though, but ensured the score remained goalless at the break with a near-post stop.

The Reds were the brighter again at the outset of the second half, not least when Sterling outmuscled Baines and released Markovic with a delightful dinked delivery over the Everton defence. The Serbian winger was ultimately crowded out as he looked to trouble the Anfield Road end net.

Lovren rose highest at the back post to redirect a Sterling cross off target, wide to the right, and the Reds' No.31 posed a continuous problem for the visitors. A minute before the hour mark, Rodgers chose to supplement that threat with the guile and creativity of Coutinho, taking to the field for Markovic.

Steven Naismith, leading the line for Roberto Martinez's team with Lukaku stationed on the right flank, showed nimble footwork to generate his own freedom to fire toward Mignolet from 25 yards - the Belgian was equal to the effort, taking the ball at chest height.

In the 65th minute, it happened. For the 10th time against the team he insists he looks for first every single time the season's fixtures are released, Gerrard found the net. A perfect finish it was too, whipping a laser-aim free-kick around the bodies in front and home despite the late fingertips of Howard between the posts.

The skipper set off on a passionate celebration and Anfield was raucous, buoying their charges to seal the contest. Balotelli almost did, cracking against the crossbar with his left foot from yet another piercing Sterling cross moments later. Replays suggested, and the Italian agreed, that the 'keeper had touched the ball on its way.

Balotelli thrashed a looping volley wide of the far post as a gripping match entered the final 10 minutes, and the points looked to be Liverpool's - until Jagielka made a dramatic contribution by powering home a piledriver to snatch a point for Everton and stun Kopites in added time.