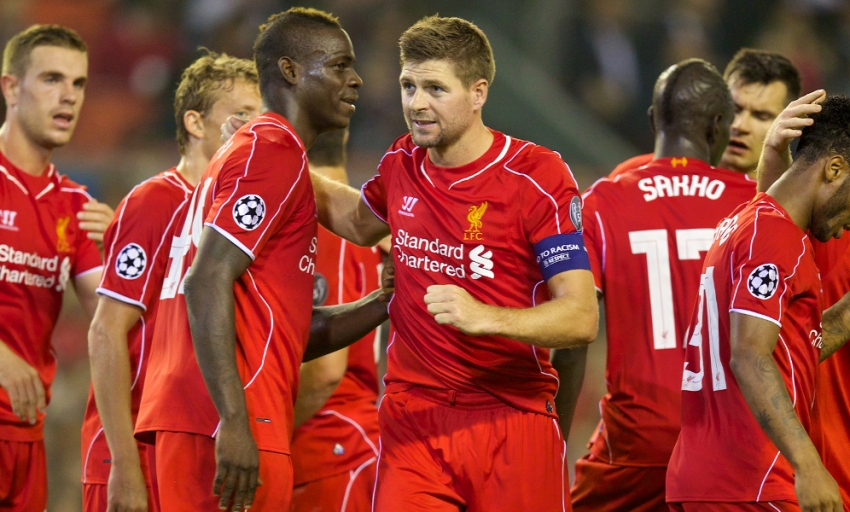 As he had done so many times in the past, Steven Gerrard settled a dramatic European match in Liverpool's favour as the Reds squeezed past Ludogorets Razgrad 2-1 to kick off their Champions League campaign with a win.

The skipper stepped up to calmly slam home a penalty in stoppage time after Javier Manquillo had been felled inside the box, concluding a period of breathless football that saw the hosts take the lead and then concede an equaliser.

Mario Balotelli thought he had struck the crucial goal with eight minutes remaining by firing in front of a joyous Kop, only for Dani Abalo to round Simon Mignolet, convert a leveller into an open net and silence the gathered crowd.

But Manquillo refused to give up a loose ball in the final seconds of the encounter and earned the rewards of a penalty, which Gerrard grasped and successfully drove past Milan Borjan to rekindle the delirium and claim the result.

Having waited almost five years to enjoy the unique elements of a Champions League occasion at Anfield, the fans inside the stadium needed no invitation to flex their vocal chords and generate the noise that manager Brendan Rodgers described as 'special' in his programme notes.

The Northern Irishman's preferred starting XI to tackle the reigning champions of Bulgaria showed one change from the side that was overturned by Aston Villa three days previously - Raheem Sterling replaced the suspended Lazar Markovic in attack.

Liverpool were on the front foot from kick-off, without necessarily causing genuine concern to the visitors during the opening quarter-hour, with full-back Alberto Moreno scurrying along the left flank with intent.

That changed on 21 minutes when Balotelli collected Dejan Lovren's pinpoint pass and spun his marker before smashing at goal and being denied by Aleksandar Aleksandrov's stunning block. Adam Lallana's follow-up was pummelled away by goalkeeper Borjan.

Yet Ludogorets were by no means overwhelmed by the demands of performing at one of the continent's iconic venues, with the dual pivot of Anicet Abel and Svetoslav Dyakov ensuring that Georgi Dermendzhiev's team had adequate possession.

Balotelli, seeking his first goal in Liverpool colours, circumvented the left edge of the Bulgarians' penalty area twice in search of the freedom to unleash with his right boot, but the eventual effort rolled harmlessly into the hands of the diving Borjan.

The Reds then produced a scintillating team move that deserved greater reward. Moreno fizzed a delivery into Sterling, who flicked into Philippe Coutinho and allowed the Brazilian to feed Jordan Henderson, rushing into the middle. The new vice-captain expertly shaped himself to subsequently find Lallana, but the No.20 was again thwarted by a last-minute Ludogorets body.

Nimble approach work by striker Roman Bezjak briefly seemed to have carried the opposition poacher past the home defence but Mamadou Sakho covered in timely fashion and the ball ultimately ricocheted behind for a goal-kick, leaving the score goalless at the break.

When the two teams returned, it was not long before the Kop was roaring - unsuccessfully - for a spot-kick. Lovren's diagonal was headed into the path of Lallana by Balotelli, but when the midfielder tumbled under pressure from Cosmin Moti, referee Matej Jug was unmoved.

Then came the finest chance of the tie: sensing an opportunity to dart into Ludogorets territory from his right-hand position, Manquillo latched onto Henderson's incisive clip into space but volleyed over the crossbar at the crucial moment.

Next, Coutinho accurately slipped Sterling into room to manoeuvre inside the left channel but neither Henderson nor Balotelli could connect with the forward's immediate low cross as the clock ticked toward an hour played.

Bezjak's alertness was a recurrent issue for Rodgers' charges and the Ludogorets No.9 scampered onto a quick throw-in, with the hosts caught cold, and snapped a toe-poker toward the top corner that curled away from Mignolet's goal.

On came Fabio Borini and Lucas Leiva, for Lallana and Coutinho respectively. And the former was almost an instant hero; his Italian compatriot Balotelli swept out to Manquillo and the defender sent a first-time cross onto Borini's head, but Borjan stretched out a palm to prevent an opener.

The response from the Bulgarians was equally dangerous, with Marcelinho nutmegging Sakho to release Bezjak clean through and Mignolet left to watch hopefully as the striker's daisy-cutter finish bounced against the base of the far post and away to safety.

Henderson should probably have worked the 'keeper with a central header from Moreno's delivery but glanced wide. However, the growing frustration would melt into joy moments later when Balotelli took control of proceedings.

Again it was the Reds' dynamic left-back who found a teammate with a cross, this time from a standing position, and a spot of clever close-control ball juggling worked a modicum of freedom for the No.45 to thrash home into the opposite corner.

Pandemonium suddenly ensued. Abalo raced around the Liverpool defence to take a fine assist and immediately dribbled around Mignolet and tapped into a gaping net to seemingly snatch the unlikeliest of points for the away team.

Rodgers' players had other ideas and when Manquillo caused something out of nothing and was upended by Borjan, Gerrard was his trademark composed self to convert from 12 yards and rescue victory from the jaws of disappointment.