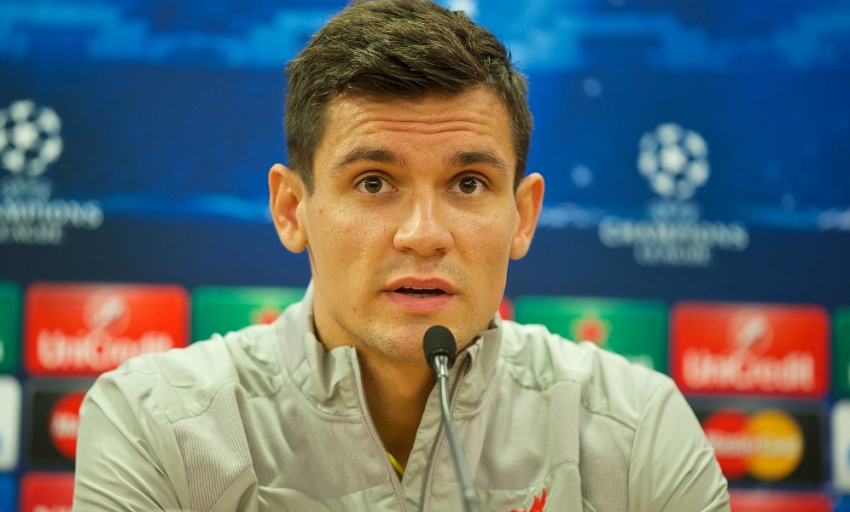 Brendan: It's going to be a special night

Dejan Lovren believes Ludogorets Razgrad's incredible story in reaching the Champions League is what makes football special – and admitted he'd be prepared to try and rival Cosmin Moti's heroics if ever required.

The Bulgarian champions booked their place in the group stage in the most dramatic fashion against Steaua Bucharest last month.

Trailing 1-0 from the first leg in Romania, Wanderson netted a last-minute volley to force extra time in Razgrad.

However, they were reduced to 10 men when goalkeeper Vladislav Stoyanov was sent off in the 119th minute.

It meant centre-back Moti was required to go in goal for the shootout - and he emerged the hero, sensationally saving two spot kicks to ensure Ludogorets progressed 6-5 on penalties.

So, would Lovren ever fancy himself as a makeshift custodian if circumstances dictated so?

"Yes, for sure," he smiled when the question was put to him by Liverpoolfc.com at Anfield. "If I needed to go in goal, I would go in goal - I will do everything for the team.

"Of course, it's an unbelievable story for Ludogorets. I saw the game and was really surprised. This is why football is so amazing. They deserve to be here."

Lovren and Liverpool will, of course, hope that situation never arrives - the Croatian's outfield Champions League experience could prove vital over the course of the campaign.

He's clocked up 21 appearances in the tournament to date during his time with Dinamo Zagreb and Lyon.

"It's an advantage for me, but it's also something new for me because I haven't played in the Champions League for two years," said Lovren.

"I know what to expect in the Champions League - it will be tough. It's never easy, every team deserves to be in the groups. We know what we need to do - we need to take three points from the start in the first game and then look forward.

"We just need to be calm and concentrate on our game and style of play. It's important we don't think 'today is the Champions League' - we have to treat it like any other game, although it is something a little bit different."

In a group that also contains holders Real Madrid and Swiss champions FC Basel, Ludogorets are considered the outsiders to seal progression from Group B into the knockout phase.

That's not an opinion shared within the walls of the Liverpool dressing room, however.

Lovren stated: "They are a good team. We have seen some videos of them. It will be a difficult game - they have good individual players who are really quick, so we need to be ready for everything.

"But we are at home, we are playing at Anfield and we need to attack. If we can do this, I think we have a good chance of getting the three points."

Being pitted alongside Madrid did naturally grab the headlines - and after a trip to Switzerland on matchday two, Liverpool face a double header against the Spaniards.

Lovren believes the Reds should be aiming to pick up maximum points from their opening two games by the time Carlo Ancelotti's side come to Merseyside onOctober 22.

"It's important to win the first game," he said. It's easier when you start the Champions League with three points.

"Then we'll have the second game against Basel away, so we know what to expect, and then the beautiful games against Real Madrid at home and away. We need to try and get six points from the start."

Liverpool go into the game this evening with the added incentive of trying to bounce back instantly from Saturday's 1-0 reversal at home to Aston Villa.

"It was a disappointment for everyone," Lovren acknowledged. "We didn't play well in the first half, we conceded a stupid goal from the corner and at the end it was difficult to get back into the game because they were really, really good defensively.

"In the second, we were much better. We moved the ball quicker and had chances, but in the end it was a disappointment to lose 1-0 at home. Especially after the game against Tottenham; we had a lot of confidence.

"We need to move on. It's Champions League time now, so we need to forget it as soon as possible."

The last time Liverpool had a Croatian in their ranks, they went all the way in the Champions League as Igor Biscan played his part in the incredible journey to Istanbul in 2005.

The former Reds midfielder and Lovren are now good friends - so have there been any conversations about Anfield's famous European nights?

"I haven't asked Igor about it," admitted Liverpool's No.6. "I've asked him about everything else to do with Liverpool, but not about the Champions League.