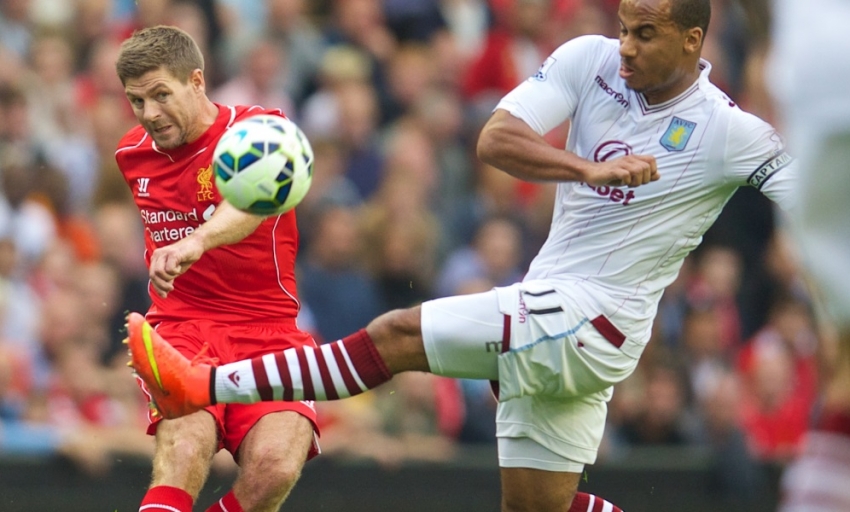 Liverpool endured a frustrating 1-0 home defeat by Aston Villa in the Barclays Premier League on Saturday evening, to record their second loss of the new campaign.

Gabriel Agbonlahor maintained the travellers' trademark in recent years of causing the Reds genuine problems at Anfield when he capitalised on a scramble inside home territory to bundle a low finish into the net and secure an advantage for Paul Lambert's charges to protect.

And that they did, with a combination of well-organised defending, the woodwork and a lack of fortune contriving to deny the hosts the equaliser they tried to find for almost the entire encounter.

Three of the aforementioned group linked up stylishly in the third minute, when Lallana dispatched a slide-rule pass to the left into the path of Moreno. The Spaniard's lofted cross to the back post was acrobatically volleyed instantly by a waiting Markovic but the confident effort sailed too high.

The Serbian glanced an inviting header wide from Javier Manquillo's centre shortly after but despite the fast-paced and encouraging opening mounted by the hosts, it was Villa - a consistent scourge for the Reds in L4 recently - that broke the deadlock.

Nine minutes were showing on the clock when an outswinging corner at the Kop end was nodded on by Philippe Senderos and seized upon by Agbonlahor, who held off the attentions of Manquillo to roll and force the loose ball beyond those between him and the net.

Senderos perhaps should have quickly doubled the lead when he was left unmarked from another dangerous set-piece, but the centre-back powered over the crossbar, sparing Rodgers' side the same two-goal deficit to eradicate as in the corresponding fixture of 2013-14.

Home supporters were on their feet pleading for a penalty when a sublime shimmy by Lallana inside the Villa penalty box concluded with the No.20 hitting the ground - but there were no appeals from the player himself and the referee was uninterested in any case.

The deep defence deployed by the visitors was frustrating Liverpool and when a clever back-header by Jordan Henderson seemed to have perfectly teed up Lallana, central and 18 yards from goal, his first-time strike hit Senderos and bounced clear.

It was the same man unleashing from the edge of the area when Dejan Lovren whipped a pass into Balotelli and the Italian flicked crisply to Lallana, but the latter's firm left-footer toward the bottom right corner was directed narrowly the wrong side of the woodwork.

Control of possession meant momentum was behind the Reds as the second half kicked off. Philippe Coutinho watched a driven attempt deflect over and there was the equivalent end result when Henderson leaped highest to nod a corner goalwards.

Precisely on the hour mark, Rodgers sought an impact from Raheem Sterling - entering the action in place of Lallana - and the No.31 worried the opposition instantaneously. Alan Hutton sent the forward sprawling with a thunderous and penalised challenge, for example.

Yet the equaliser continued to elude Liverpool, prompting the manager to call for a double change. Rickie Lambert took over leading line duties from Balotelli, while Markovic was swapped for Fabio Borini for the final 20 minutes at Anfield.

As the pressure built and the Midlands outfit opted for a counter-attack mentality, Coutinho was convinced he had found the leveller with a whipped shot from the left inside channel - but it hit the far post. Henderson and Sterling stepped on each other's toes looking for the rebound.

But the magical moment did not arrive, Villa held firm and the Reds were left to rue a second defeat in their opening four Premier League matches of the season.