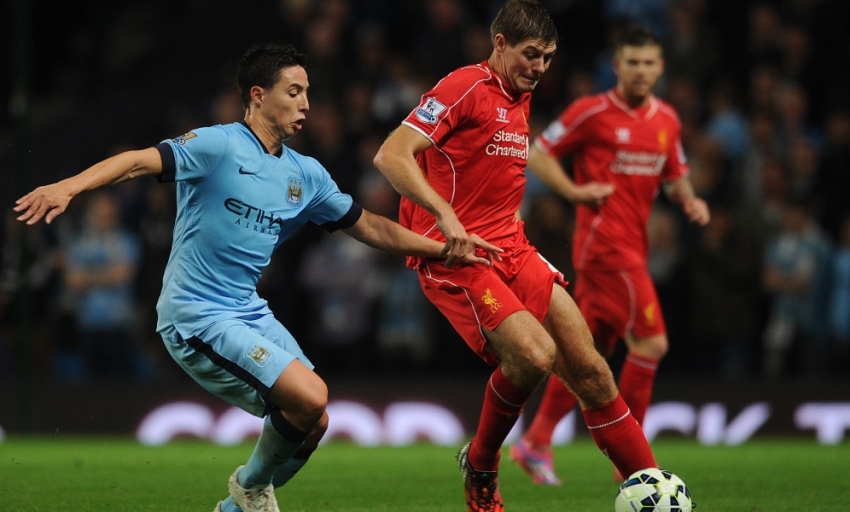 Balotelli to wear No.45 at Liverpool

Liverpool suffered a 3-1 defeat by a clinical Manchester City on Monday evening, subjecting Brendan Rodgers' charges to a first loss of the campaign in their second fixture of 2014-15.

The sting in the tail of an opening half that the Reds thoroughly dominated arrived four minutes before the break via the vicious boot of Stevan Jovetic, and it was the same scorer shortly after the restart to double City's advantage.

Daniel Sturridge had a strike chalked off due to offside and was unlucky on several occasions to find Joe Hart in careful form, allowing substitute Sergio Aguero to claim a third and game-settler with his first touch upon entering the field.

A consolation followed and a goal that Rickie Lambert will be determined to claim as his own, with the late substitute helping to bustle the ball over the line alongside Pablo Zabaleta after his initial attempt was saved.

When teamsheets were submitted ahead of kick-off, Rodgers' Liverpool version confirmed a debut for Spanish full-back Alberto Moreno, with fellow summer recruit Lazar Markovic named among the substitutes. Joe Allen replaced Lucas Leiva in midfield from the start.

The early exchanges were even, although the Reds threatened twice in quick succession when Sturridge almost slipped Raheem Sterling into the City six-yard box and the No.15 himself could not conjure an opportunity from Allen's precise centre. Edin Dzeko scuffed wide in response.

More dangerously for the travellers, Zabaleta stole in at the back post and volleyed too high to concern Simon Mignolet, who was comfortable but necessarily alert moments later when Yaya Toure collected a loose ball in shooting range and side-footed at the top right corner.

Clear-cut chances were at a relative minimum but there was one team controlling possession and dictating the tempo, and it was Liverpool. With Allen providing diligence along the left side and the midfield passing particularly crisp, Manuel Pellegrini's charges were on the back foot.

Sterling clipped a delightful, arrowed delivery inside the City backline on the half-hour that momentarily seemed to have set up Jordan Henderson for a finish in front of Hart, but the midfielder was immediately crowded out.

The home goalkeeper was forced into a reflex near-post stop when Sturridge cushioned a long-range cross-field hit from Sterling and danced around his marker. The eventual shot was struck fiercely and on target, but Hart was equal to the challenge.

For all that, however, it was the hosts who found a breakthrough in the 41st minute. As the Reds failed to sufficiently clear their lines from a City attack in the right channel, Jovetic pounced to bustle beyond Moreno and thrash low underneath Mignolet for the opener.

Three minutes into the second half, Sturridge found the net with a clinical finish, latching onto an accurate right-flank Glen Johnson cross, but celebrations among nearby Kopites were short-lived as the assistant referee had raised his flag for offside.

Within seconds, Moreno crucially raced from one wing to the other to thwart Dzeko at the last moment as the striker bulldozed in behind. In similar fashion, Zabaleta stopped Henderson when the No.14 took Steven Gerrard's clever set-piece and attempted to score.

There was no preventing Jovetic from grabbing a second goal, though. The tricky forward drifted into freedom inside Reds territory on 55 minutes and was in the perfect location when Samir Nasri clipped into the middle for a calm conversion past Johnson and Mignolet on the goalline.

Those events prompted Rodgers to introduce Markovic for his competitive Liverpool debut and the Serbian's impact was almost instantaneous; his knock inside from the left married with Sturridge's run but last weekend's match-winner was denied by Vincent Kompany's block tackle.

Next to keep the prolific striker at bay, having been played through by Sterling and swerved around the City captain, was Hart, who threw out an arm to parry away his whipped effort across goal. It would prove pivotal.

For Pellegrini called on the services of Aguero, who was picked out by a sweeping outside-to-in Jesus Navas assist and required a single touch to redirect low around Mignolet and ensure that all three points would be remaining at the Etihad.

Not that the Reds gave up; indeed, they registered on the scoresheet with seven minutes left on the clock. Sturridge held possession on the right edge of the opposition area and swept into the centre, where Lambert forced over the line at the second time of asking for a mere consolation.