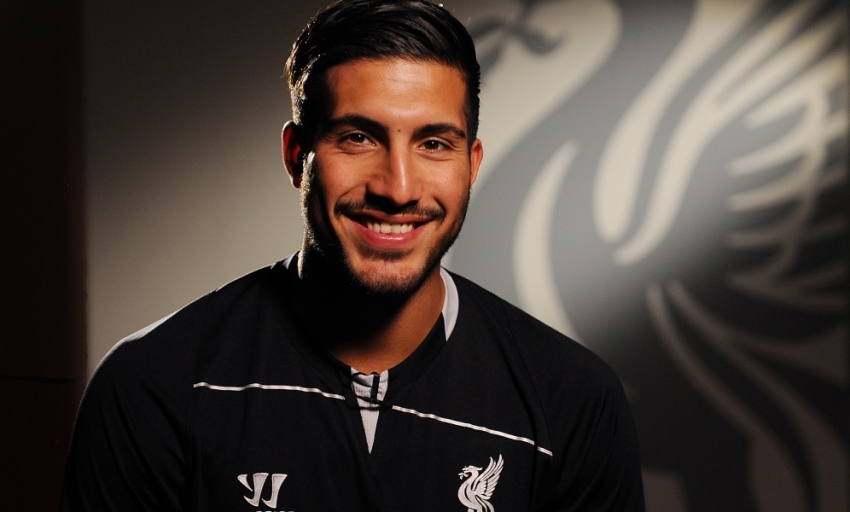 Emre Can has explained why a long chat with Brendan Rodgers made his decision to swap Bayer Leverkusen for Liverpool an easy one, after sealing a switch to Anfield.

The 20-year-old midfielder officially completed his move to the Reds today, becoming their third signing of the summer following deals for Rickie Lambert and Adam Lallana from Southampton.

Moments after the deal was rubber-stamped, Can sat down with Liverpoolfc.com to speak of his pride at the move and reveal how a discussion with Rodgers convinced him to swap the BayArena for Merseyside.

LFCTV GO subscribers can watch the chat with our new midfielder in full by clicking play on the embedded video below. Need a subscription? Sign up now. Alternatively, you can read the full transcript below.

Emre, congratulations on your move. How does it feel to be a Liverpool player?

I want to thank the manager for trusting me and allowing me to play here. I am proud to be a part of the family and I am looking forward to playing here. I will give it my best.

There was speculation linking you with other clubs, but was it an easy decision to come here when you knew there was firm interest?

You're someone who can play in a variety of positions, what is your best do you think?

I personally see myself as a central midfielder, that is where I feel most comfortable, but I can also play a variety of other positions. At the end of the day, it's the manager's decision on where to play me.

What do you think you will bring to this Liverpool team?

I just want to give my best and help the team as much as I can. I believe this season the team finished second in the league, so I want to be a Premier League champion next season.

Do you see your versatility as an advantage?

Yes, it definitely is an advantage to play a number of positions because I can help the team in many different ways. However, I have stated this before and I would like to mention it again, I see myself as a central midfielder, that is where I feel most comfortable. But, at the end of the day, the manager knows best where to play me.

Tell us about your upbringing at Bayern Munich - it must have been a fantastic place to be educated in football...

I am very thankful for my time at Bayern Munich, I played there for four years. It was a great honour to play for one of the biggest and best teams in the world. However, I am at Liverpool now and this is where my sole focus is. I believe Liverpool Football Club can be on a similar level to Bayern Munich next season.

Who were the big influences on you there?

There were a couple of players. At Bayern Munich, for example, there was Franck Ribery, who I got along with very well and who I have spoken with a lot. He obviously became European Footballer of the Year, hence there is a lot to learn from him on the training pitch. In my position especially, I also learned a lot from Bastian Schweinsteiger, Javi Martinez and Luiz Gustavo. They helped my development.

The time came to leave, though - I'm sure it was a difficult decision - but is it a decision that was beneficial to you?

I don't regret leaving Bayern Munich. I am convinced it was the correct step for me. I played a lot at Bayer Leverkusen. I played in the Champions League and in the Bundesliga. I have played a lot of games and it was a very good decision to go to Leverkusen. During the year, I matured and developed massively.

How do you think you matured?

It definitely helped me establishing myself in professional football. I have had a lot of games now and the nervous feeling when stepping on the pitch in the first couple of games is gone. I am more experienced and developed as a result.

Bayer Leverkusen were brilliant for you. Sami Hyypia was your manager for a good portion of that, what kind of influence did he have on you?

He helped me a lot. I came to Leverkusen as a very young player and didn't have many Bundesliga games back then. I wasn't well known. He trusted in me, and because I performed well in training he gave me the opportunity to play and made me a starting XI player. He told me that he did not care about my age, he simply decided on the player's skills as to whether he would play or not. I have to thank him a lot for his trust in me.

Has he called you since the move happened? Any advice?

No, we haven't talked about it as of yet. But we might have a chat about it one day.

It's the return of Champions League football to this club next season - is that part of what attracted you to this challenge?

Playing in the Champions League is a dream come true for every footballer. I have a total of seven Champions League games now, and those sorts of matches are not comparable to any other games. I hope we will progress as far as we can and I am looking to compete against the best teams in Europe. I believe we will play a good role in next year's competition.

Can we make an immediate impact in the tournament?

Yes, without a doubt. We came second in last year's Premier League season, the best league in the world. We don't have to hide from anybody. We simply need to believe in ourselves and I am very optimistic that we will go far in the Champions League.

What do you know about the season your new team had last year? Did you take an interest in Liverpool's Barclays Premier League campaign?

You automatically follow Liverpool when watching the Premier League. LFC is a great club and the fans are amongst the best in the world. I am looking forward to the first game and can't wait to step on the pitch for the first time at Anfield.

Can we go one better, perhaps, next season?

Yes, we will give it our best in order to finish on top of the table next season.