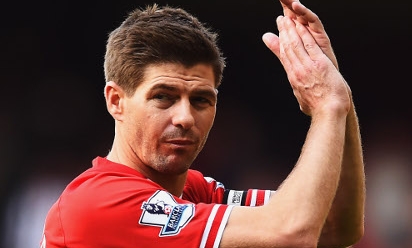 Agger and Henderson return for finale

Liverpool concluded their Barclays Premier League season with a hard-fought but fitting 2-1 victory over nine-man Newcastle United at Anfield on Sunday to take the runners-up position for 2013-14.

Silence fell inside the ground on 20 minutes when a frantic Newcastle attack in the left channel brought a centre into the Reds' area, where Martin Skrtel's connection redirected the ball into the far corner of his own net to hand the Geordies a lead.

But a pair of quick-fire strikes in the second half, from the boots of the two Daniels - Agger and Sturridge - rapidly overturned the scoreline in style, establishing total control for the remainder of the clash for Liverpool as they ended their campaign with three more points.

Although the fairytale scenario of lifting the championship was denied by a simultaneous victory for Manchester City at the Etihad Stadium, the win was enough for Brendan Rodgers' team to secure an impressive second place in the final standings.

Team news was confirmed one hour before the two sides took to the field, and there were two changes to the boss' line-up - Agger returned to central defence, while Jordan Henderson was back from a three-game suspension. Mamadou Sakho and Lucas Leiva dropped to the bench respectively.

After a brisk start from the hosts, backed by rousing and continual noise from the Kop behind them, Shola Ameobi nodded a presentable chance off target when picked out by a curling Vurnon Anita corner towards the back post. And Simon Mignolet comfortably scooped up when the striker headed at goal again in the 10th minute.

On 18 minutes, a relentless period of pressing by Henderson eventually earned Liverpool a free-kick wide on the right touchline. In typically opportunistic fashion, Luis Suarez tried to take the set-piece quickly, dinking a perfect high lob over Tim Krul and in - only for the referee to pull the play back.

Almost immediately, the away team struck. Yoan Gouffran scurried along the left wing and into freedom as he approached the area; the wide-man's subsequent whipped cross was a dangerous one to defend and, at an awkward height, Skrtel could only clip unfortunately beyond Mignolet and into his own net.

Thankfully, the Belgian was able to prevent Newcastle from doubling their advantage, though, producing a stunning, point-blank stop as the troublesome Gouffran surged into space centrally to collect a cutting through pass and powered a drive at the goalkeeper.

With just over 10 minutes remaining in the half, Suarez set off on a trademark mazy dribble, gliding in between a succession of opposition defenders, but the Uruguayan's eventual low effort lacked the necessary gusto to call Krul into action.

As news of an opening City strike filtered around Anfield, the home supporters rose in unison convinced that Sturridge was about to glance home an equaliser from an accurate delivery by Henderson - but the ball carried wide to the left and Rodgers' charges entered the interval 1-0 down.

The Reds returned early for the second period, eager to turn the encounter around and Raheem Sterling dispatched a daisy-cutter from distance which took a slight deflection and caused concern for the Newcastle 'keeper until it ultimately drifted wide.

Steven Gerrard created a moment of havoc when he launched an inswinging free-kick into the Magpies' box 10 minutes after the break, but the ball evaded those in red as well as those in grey and the home side were thwarted once again. Suarez then slipped as he sought to score directly from a set-piece and Krul handled with ease.

But a remarkable spell of football followed. On 63 minutes, the skipper planted a perfect cross to the far post, where Agger was stationed to expertly hook his leg over the ball and send a strike underneath the stopper to haul Liverpool level.

Within 120 seconds, Gerrard was standing over a free-kick in almost exactly the same position - and promptly executed a carbon copy piece of technique. This time, Sturridge was the grateful recipient, forcing home from close range to put the Reds ahead. Ameobi was then shown a straight red card for dissent as momentum switched dramatically to the hosts.

From there, Liverpool dominated possession, probing for a third in the time remaining on the clock, and saw another goal disallowed by referee Phil Dowd - this time for offside. Magpies substitute Paul Dummett was then dismissed for a rash challenge on Suarez.

And there was no further drama at the close of the most dramatic of seasons, with Kopites serenading their heroes in the final moments to acknowledge a campaign which has brought such joy to all involved with the club.