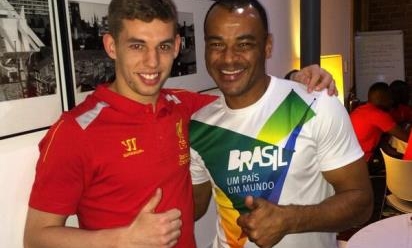 Brendan: This is just the beginning

The Liverpool defender christened 'the Scouse Cafu' by Reds fans met the man he has been named after on Saturday night, as Jon Flanagan came face to face with the Brazilian legend in the city.

Having posted his appreciation for both the club and the 21-year-old full-back via Twitter on several occasions in recent months, the two-time World Cup winner has visited Merseyside this weekend.

Cafu will be in attendance to watch Flanagan and co take on Newcastle United at Anfield on Sunday with Brendan Rodgers' side still in contention for the Barclays Premier League title on the final day.

On the eve of the encounter, the mutually appreciative pair crossed paths, prompting Liverpool's No.38 to share a picture of their meeting on social media, which can be seen below.

Me and the legend Cafu pic.twitter.com/wyKASxybiC

And Flanagan was not the only Liverpool star keen to take a memorable snapshot alongside the former Brazil international, with Iago Aspas, Philippe Coutinho and Steven Gerrard among those to grab pictures...

Liverpoolfc.com will be speaking to Cafu exclusively during the Brazilian's stay on Merseyside, so stay tuned to the official website next week for his thoughts on the Reds, compatriots Coutinho and Lucas Leiva, and much more.