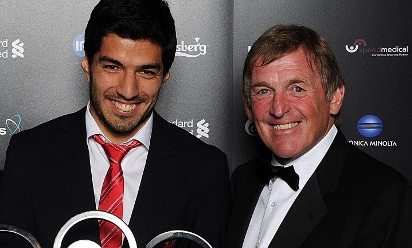 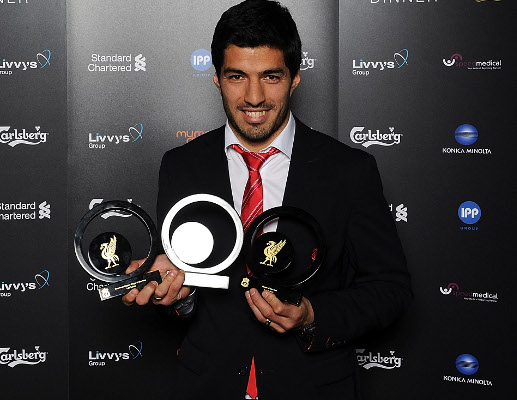 The Uruguayan striker was recognised for his sensational season so far, which has seen him net 31 goals in the Barclays Premier League, by picking up the Players' Player of the Year gong after being selected by his teammates.

Suarez was also rewarded by supporters, who voted him their Player of the Year, while his 40-yard volley against Norwich City in December clinched the Goal of the Season honour.

Elsewhere on a star-studded night at the Liverpool ACC Conference Centre, Brendan Rodgers was presented with the Outstanding Achievement Award for leading the Reds back into the Champions League and mounting their title challenge, just two seasons into his tenure.

Meanwhile, Raheem Sterling was voted as Liverpool's Young Player of the Year by fans for a watershed campaign in which he's struck 10 times in 37 appearances and established himself as a regular in the starting XI.

Anfield legend Ronnie Moran was recognised for his contribution to Liverpool during the legendary Boot Room era and beyond with a Lifetime Achievement Award.

The event wasn't just about honouring achievement on the pitch, as Lucas Leiva's services to the Liverpool FC Foundation were rewarded with the Bill Shankly Award as someone who has upheld the club's values, showing dignity, unity, commitment and ambition.

LFC TV senior producer Matt Walker scooped the Staff Recognition Award for his work ethic, integrity and unerring diligence, which has shone like a beacon.

The Supporters' Club of the Year prize went to the Paris branch for their extraordinary backing of the Reds, while Rado Chmiel received the Fan of the Year trophy for going above and beyond for the club and community, showing great courage to overcome adversity.

As part of the event, an auction was held to raise vital funds for Liverpool FC Foundation, the club's charity which provides a wide range of sport-inspired programmes throughout the local community and beyond that help to inspire positive change and build better futures for people of all ages.