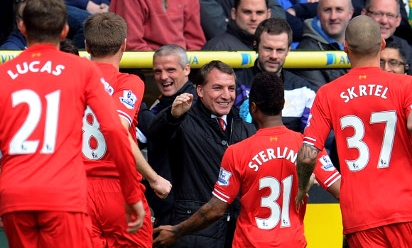 Liverpool opened up a five-point lead at the summit of the Barclays Premier League and ensured Champions League football next season by beating Norwich City 3-2 at Carrow Road on Sunday.

Raheem Sterling broke the deadlock with a thunderous piledriver from distance on four minutes, paving the way for Luis Suarez to double the advantage with a simple conversion from the youngster's delivery into the centre.

Within 10 minutes of the second half beginning, the Canaries hauled themselves back into the tie, with Gary Hooper taking advantage of a defensive scramble. But a determined run brought Sterling the luck of a deflection which racked up a 3-1 scoreline.

Back came Norwich and the tension was cranked up when Robert Snodgrass headed home with a flick into the far corner with 12 minutes remaining, but the travellers held firm for three more vital points in East Anglia and an 11th straight victory.

When teamsheets were submitted an hour before kick-off, the Liverpool XI showed two changes from the side that downed Manchester City - Joe Allen and Lucas Leiva were named in place of the suspended Jordan Henderson and injured Daniel Sturridge.

The captain, Steven Gerrard, meanwhile, was selected for his 666th appearance for the club, taking him into outright third place in the all-time list, behind only Ian Callaghan and former colleague Jamie Carragher.

As has occurred so often in home fixtures this season, the Reds laid the foundation for their performance within minutes of kick-off, and in keeping with recent weeks, it was the boot of Sterling which provided the breakthrough.

With the hosts lulled into a false sense of security as the 19-year-old drifted into a central, shooting position, the Englishman unleashed a searing drive which took the slightest of deflections as it sailed past John Ruddy and into the top corner.

The Norwich goalkeeper stood firm to deny Allen with an outstanding reflex stop on 10 minutes, after the Welshman had smartly collected an incisive pass by Philippe Coutinho into the area. But the second goal arrived mere moments later.

From deep on the left wing in Norwich territory, Sterling spotted an eye-of-the-needle delivery and executed it perfectly, finding Suarez in the six-yard box to present the Uruguayan with a side-foot finish for his 30th Premier League goal of this campaign.

Tenacious defensive coverage by Allen stunted several attacks by the Canaries as they sought a response and, with confidence raised, the Liverpool midfielder punted a strike from inside the left channel that bobbled wide of the right post.

When Mamadou Sakho squandered possession in a dangerous region on the half-hour, centre-back colleague Martin Skrtel produced a crucial clearance under pressure; Simon Mignolet then punched away a dipping blast from Nathan Redmond.

Sakho nodded wide from a vicious Coutinho corner into the Norwich box, and the Brazilian guided a curling effort off target in the same direction, meaning the score remained at 2-0 when the sides entered their dressing rooms for half-time.

The hosts began the second period brightly, but it was Sterling again who threatened to find the target in the fledgling stages of the half; a piercing Suarez long pass fed Coutinho, who cut back for the No.31 but his whipped hit flew over the crossbar.

Typifying an astonishingly resolute display, Allen was alert to block a Snodgrass strike. Norwich reduced their arrears shortly after, though, as a looping cross troubled Mignolet under the challenge of Bradley Johnson, the ball fell loose and Hooper tapped in to give the Canaries hope.

Suarez was centimetres away from quickly restoring a healthy lead on the hour mark. The No.7 shuffled to the right to work freedom in range of Ruddy's goal and dispatched a drifting hit towards the left corner - but it narrowly travelled wide.

But his younger teammate made no mistake in the next foray forward. Sterling won possession and sprinted ahead centrally, twisting around the home defence and ultimately clipping a hit which deflected slowly up and over the Norwich 'keeper and nestled nicely for 3-1.

The storm had not been completely weathered, however, and Russell Martin redirected a set-piece over with his head. Warning not heeded, Snodgrass successfully glanced a centre from the left flank into the far corner to set up a grandstand finale.

Mignolet made a fine save on his goalline to deny substitute Ricky van Wolfswinkel from yet another cross into the area, and Rodgers' charges worked tirelessly in what time remained to protect the result and tick off another game in their Premier League surge.