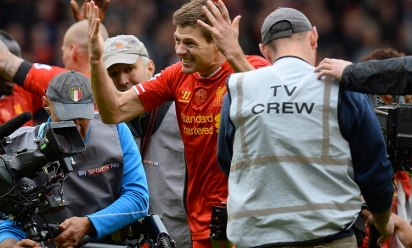 Beard: No pressure in title defence

As Liverpool continue their quest for excellence, Steven Gerrard is not just making supporters dream - he is the dream, writes Melissa Reddy.

There it was. Familiar and formidable. Emotions were spent, but it was impossible not to be swept up by those arms aloft; a scene of supreme belief.

When the final whistle went at Anfield, with Liverpool incredibly ousting champions-elect Manchester City 3-2, Gerrard exercised his lungs and lifted both his hands with the same vivacity that has fired his side to the Barclays Premier League summit.

That sight of encouragement is not foreign to Reds supporters; it was the same gesture that helped spark the spell-binding comeback in Istanbul. Without words, it told fans everything they needed to know - we want this, we will fight for this, we will give everything so you can enjoy this with us. 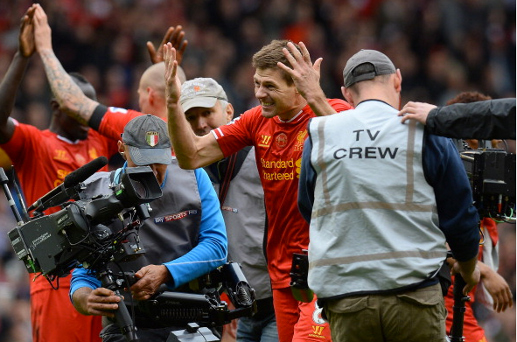 Gerrard was then understandably overrun with emotion. The club he has served since he was nine had supplied 'the biggest statement this season' less than 48 hours before marking the 25th anniversary of the day deepest in memory.

April 15, 1989 is a date stitched into the fabric of Liverpool supporters, a tragedy that rocks the core, a reminder that 96 family members are no longer with us.

Gerrard lost his cousin, Jon-Paul Gilhooley, on that heart-wrenching afternoon at Hillsborough. Just 10 at the time, and as fanatical about the football club as a young 'Stevie', he was the youngest victim of that cruel catastrophe.

"In the thrill of victory, I always think of Jon-Paul and how buzzing he would be over a Liverpool win," Gerrard wrote in his autobiography. The emotion that engulfed the captain, his eyes often set sky-ward, was the knowledge that his cousin and 95 other missing football relatives would've revelled in the atmosphere at Anfield. The triumph, above everything, was for them.

The tears quickly transformed into command - Liverpool will not let this slip. Huddled together on the pitch, he dictated that the players will do 'the same against Norwich', he reminded the team that nothing had been won, and encouraged them to continue their climb.

Gerrard did the same pre-captaincy when he urged the Reds not to lose momentum during their successful FA Cup run in 2001. A fired up Tranmere Rovers side stood in the way of Liverpool's progress to the semi-finals and he issued a similar 'don't let it slip' instruction.

Leadership is a large component in the 33-year-old's make-up. His aura is unmatchable. Players who have featured alongside Gerrard are still in awe, there are greats like Zinedine Zidane, who wish they'd had such an honour. From the tea lady at Melwood to Diego Maradona, you will hear of Steven's influence. He is not an example, he is the example; professional, heroic, head-strong, assured.

Gerrard is playing a deeper role on the pitch, but he is very much at the forefront of Liverpool's push for greatness. Luis Suarez underlined the skipper's importance in his decision to commit his future to the club with a new contract, Daniel Sturridge and Jon Flanagan have highlighted Gerrard's service as a major motivating factor for the squad, Raheem Sterling's said: "I couldn't have asked for a better captain," Jordan Henderson is starting games with, and learning from his idol...

Such is Brendan Rodgers' trust and faith in his commander that despite being on the brink of a two-game suspension for totting up yellow cards from February 28 to April 13, Gerrard still started every game.

And why would you not have complete confidence in the man who has shouldered Liverpool's hopes and expectations for over a decade?

The man who not only has to consider his own ambitions on a daily basis, but that of millions globally who are glued to the club, and the objectives of one of football's greatest institutions itself.

Rodgers has rightly stated that the Reds' mastery this season is down to the collective, but you couldn't have dreamed up a better chief.

There was a time Stevie looked up to Robbie Fowler and Steve McManaman, and wanted to emulate them. "The sad truth is that they were probably not even aware of me, Steven Gerrard, an unknown kid with a huge desire to copy them," he admitted.

Now, those two legends look up to him. A local lad, whose first professional contract 17 years ago carried a salary of £700 for the opening annum, is carrying the club he loves through a record-breaking campaign as the 96 are remembered.