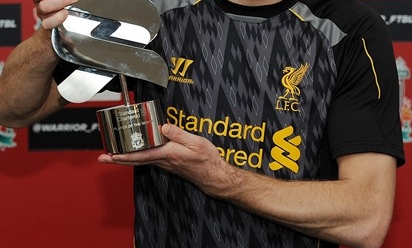 Allen: There are no distractions for LFC

Steven Gerrard's inspirational displays last month have been duly rewarded with the Standard Chartered Player of the Month award for March, as voted by the club's fans. 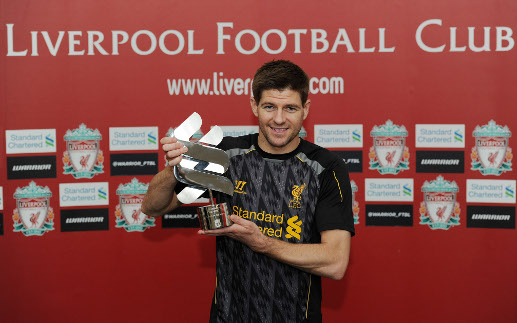 In a month when Liverpool swept all comers to clinch five wins and rise to the top of the Barclays Premier League table, their skipper was at his brilliant best, thriving in a transformed, deeper role on the pitch.

He capped a gritty team performance at St Mary's with a trademark penalty to make it 3-0 to the Reds on the first day of the month; however, he then had to wait more than two weeks for his next minutes in a red shirt.

When they arrived, the setting was Old Trafford and rivals Manchester United. Gerrard controlled the game - and he could have hit an historic hat-trick of penalties, had it not been for the woodwork. He settled, rather, for a brace as the Reds ran riot.

Next, the skipper helped steady the ship when it seemed as though Cardiff City would capsize Liverpool's aspirations in the Welsh capital as they stole ahead twice. By the final whistle, however, the Reds were 6-3 winners.

Gerrard then hammered a free-kick beyond Vito Mannone against Sunderland at Anfield to momentarily settle the nerves on a dramatic night as the Black Cats were edged 2-1, before helping destroy Tottenham Hotspur 4-0 just four days later.

Having triumphed ahead of Raheem Sterling and Luis Suarez in a poll on the club's official Twitter account, @LFC, the No.8 was presented with the award at Melwood on Thursday.

Upon receiving the trophy, Gerrard told Liverpoolfc.com: "These are always the best awards. The fans pay good money to come and watch us and they are very experienced and knowledgeable about the game, so to get this award is a fantastic achievement.

"I think for the first time in a long time, it could have been one of any of the starting XI of late - and even players who have been coming out of the team have been contributing really well - so I think this is more of a team award at the moment rather than just myself.

"I'm really happy with the way I've been playing. I'm really critical of myself after every performance and every training session. I'm very pleased at the moment. I'm contributing well to the team, and the manager's happy with me, you'll see a happy Steven Gerrard." 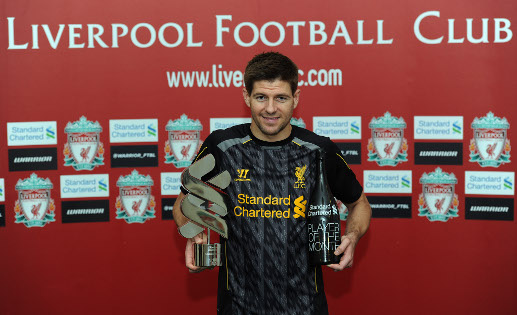