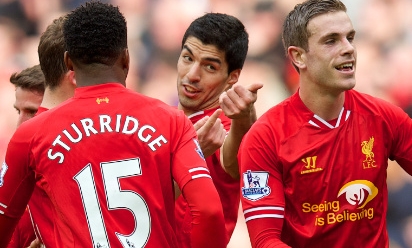 Raheem in for Allen against Tottenham

Liverpool stormed to a two-point advantage at the summit of the Barclays Premier League with a commanding 4-0 victory over Tottenham Hotspur at Anfield on Sunday.

A clumsy own goal by Younes Kaboul set the home side on their way with less than 120 seconds played and Luis Suarez bolstered his team's advantage with a sublime individual goal midway through the first half.

The second period was only 10 minutes old when the game was won, as Philippe Coutinho - a star performer throughout the clash - drove forward from the centre and pummelled a low hit into the Kop end net.

With a quarter of an hour remaining, Jordan Henderson sent in a free-kick from the left which eluded everybody in the area, nestled into the far corner and added extra gloss to an eighth consecutive triumph in the division.

For Liverpool's third game in eight days, Brendan Rodgers made one alteration to his line-up - Raheem Sterling was selected to supplement the attack, with Joe Allen dropping to the substitutes' bench.

As on so many occasions this season, the hosts burst out of the blocks, registering in a matter of seconds; possession was smartly worked to Glen Johnson, raiding down the right side and the No.2's low delivery into the area was turned into his own net by Kaboul with just two minutes on the clock.

Suarez curled off target, while the visitors almost mustered a quick response when Christian Eriksen ghosted in behind the Reds' defence to collect a through ball - but the Dane was eventually crowded out, with Jon Flanagan ultimately blasting away an authoritative clearance.

If Daniel Sturridge had been an inch taller, the prolific Englishman would have doubled the lead in the 10th minute, but despite his greatest efforts he could not quite reach a swerving centre from the left by Suarez.

Coutinho volleyed another cross from the Uruguayan, this time from the opposite flank, wide, before the Premier League top scorer trained his sights from an inviting, central free-kick - his hit travelled over.

Shortly after, though, Suarez was celebrating for the 29th time in this campaign; it was a goal of his own making, winning the ball with his body strength in the left channel, sprinting forward and dispatching a precise finish past Hugo Lloris and into the far corner.

A lengthy dribble across the pitch by Sturridge drew a rash challenge by Kaboul, but the No.15's subsequent set-piece effort was no danger to the Tottenham goalkeeper.

In response, Nabil Bentaleb smashed a shot straight at Simon Mignolet and the Belgian stopper was alert in leaping to his left to punch away a swinging drive from the corner of the penalty box by Roberto Soldado.

With four minutes remaining in the half, everybody present in L4 was convinced that Suarez had extended Liverpool's lead to three - from a Sterling dinked centre, the No.7 powered a header goalwards which was expertly tipped onto the crossbar and away by Lloris.

Racing onto a fine pass by Johnson, he then drew a free-kick due to handball - the Uruguay international's whipped strike was directed too far wide, however, and the half-time whistle handed Spurs some respite.

The relentless tempo simply began again when the second half got underway and Henderson had his head in his hands on 53 minutes - Sterling completed a neat one-two with Sturridge and squared for the No.14, who struck high into the Kop with the 'keeper out of position.

No matter, it was 3-0 within moments. A shimmy at left-back by Flanagan kick-started the attack, with the ball then moved to Coutinho in the middle; the Brazilian took control, picked his spot and drove a clinical finish searing into the bottom corner.

A back-heel by Sturridge has brought great reward for the Reds already this month but the striker's attempt to score with one, having outmuscled Danny Rose to latch onto a Sterling pass, was thwarted by Lloris.

A comprehensive win morphed into another rout as the clock ticked into a 75th minute, with Henderson making amends for his earlier miss by delivering a set-piece that travelled beyond his waiting teammates - and Lloris - and home for 4-0.

Flanagan kept out Soldado as the Spaniard rushed into space with a phenomenal covering challenge, and the Londoners were left to play out time as Liverpool cruised to top spot in the Premier League with six games left to play.