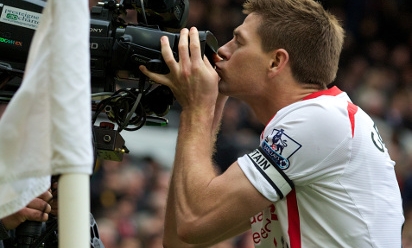 Liverpool produced another performance for the ages by beating rivals Manchester United 3-0 at Old Trafford on Sunday, with the talismanic Steven Gerrard converting twice from the spot to inspire his team yet again.

The midfielder dispatched two of the most perfect penalties you will ever see - one in either half - to single-handedly ensure that Brendan Rodgers' high-flying side returned to Merseyside with all three points.

Luis Suarez added gloss to a phenomenal display when a Daniel Sturridge drive deflected handily into his run into the area, and the Uruguayan made no mistake with an unerring finish past David De Gea to complete the game.

When the teamsheets were handed in an hour before kick-off, it was confirmed that Rodgers had made a single alteration to his starting XI from the win at Southampton 15 days ago - Raheem Sterling replaced Philippe Coutinho.

A bright start from the visitors brought a chance for Sturridge on two minutes, as the No.15 collected a neat through ball by Jordan Henderson but clipped a strong effort off target from an ever narrowing angle on the right.

Neither side could quite maintain a rhythm during the opening quarter-hour, although Robin van Persie threatened after taking control of a Marouane Fellaini delivery to the back post; each of the Dutchman's attempts were blocked, though.

As the game approached the 30-minute mark, an inviting opportunity presented itself to Joe Allen. Sturridge skipped inside from the right and looked to play in Suarez, only for the ball to bounce out for the Welshman, who mistimed the hit, allowing De Gea to take with ease.

Within five minutes, however, the Spanish goalkeeper was picking the ball out of his own net. When a cross reached Suarez on the left wing, the Uruguayan looked to skip inside Rafael Da Silva in the penalty area and was stopped by an obvious handball.

The referee pointed to the spot instantly and the travelling fans waited with quiet confidence as the skipper stood over the penalty - in trademark calm fashion, Gerrard sent the strike gliding into the side-netting of the corner to hand the Reds an advantage.

At the other end, the captain was required to deflect a Van Persie hit away for a corner as the lethal forward shaped to beat Simon Mignolet, then the Belgian brilliantly punched away a piledriver from Wayne Rooney, who was subsequently denied by an outstanding Martin Skrtel tackle.

United had been exerting pressure before the half-time break but their resurgence was halted just a minute into the second period when Allen burst into the home box and was clumsily knocked over by Phil Jones.

Gerrard, without doubt the coolest man in the stadium, took responsibility once more and planted another precise spot-kick low into the corner to double Liverpool's advantage and prompt delirium among the away section to his right.

Adnan Januzaj provoked an element of concern when he raced along the United right wing and into the Reds' area at the near post to win a corner. From the set-piece, Nemanja Vidic leaped highest but his header flew over the crossbar.

Past the hour now and Rooney attempted to deftly trick his way into freedom on the left corner and launch at Mignolet but a combination of Reds - with the skipper at the forefront - successfully kept the England international at bay. Fellaini then smashed over as frustration grew for the home support.

Nose bloodied from the Trojan-like performance he contributed, the hosts afforded Gerrard a dangerous amount of time and space with 16 minutes remaining and his powerful blast was deflected out by the leg of Jones.

Shortly after, Rooney dribbled along the left and clipped an accurate centre onto the head of strike partner Van Persie, who glanced wide. Seconds later, Liverpool were incredibly awarded a third penalty of the afternoon.

Sturridge scampered forward and was felled under pressure by Vidic - the defender was sent off for his second booking and Gerrard took aim from 12 yards yet again. This time, unfortunately, his strike in the opposite direction bounced away off the post and a hat-trick eluded him.

Suarez seemed certain to score when he latched onto a pass over the top, brushed off the attentions of Jones and carried into the box, but the No.7's volley was impressively palmed out for a corner by De Gea.

His 25th goal of the Barclays Premier League campaign soon arrived, though - Sturridge unleashed a drive which carried straight into the path of his teammate, who side-footed beyond De Gea to seal a result that silenced Old Trafford.